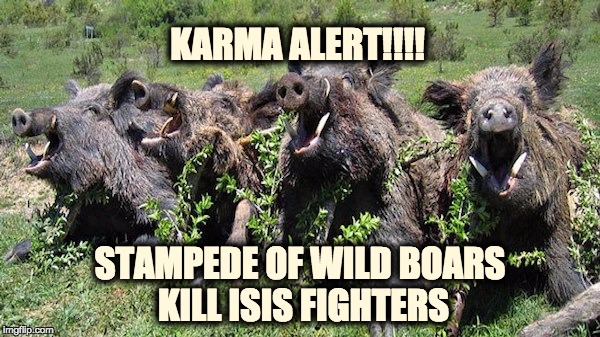 ISIS fighters found themselves experiencing particularly gruesome and unflattering deaths, when they were trampled and gored to death by a pack of wild boars.

Under Muslim dietary laws all kinds of swine are banned.

“Forbidden to you (for food) are: dead meat, blood, the flesh of swine, and that on which hath been invoked the name of other than Allah.” Al-Qur’an 5:3

Which is why this latest story about ISIS from Iraqi News is particularly ironic, after all the ISIS terrorist group claims to be building a world-wide Islamic caliphate:

The animals went on a rampage near a farmland in al-Rashad region, an Islamic State pocket 53 kilometers south of Kirkuk. They attacked the militants and left three killed, according to the source.

Alsumaria News quoted the source saying that “Daesh (Islamic State) militants took revenge at the pigs that attacked the farmland,” but did not clarify the method.

Apparently the three radical Muslim ISIS terrorists were hiding in wait ready to attack when they got attacked.

Wild boars go on the rampage in northern Iraq, and kill 3 members of ISIS. https://t.co/hegT0aejKI

The head of the anti-Isis forces spoke to the Times of London:

The men were said to have taken cover in a bed of reeds near fields in the Hamrin mountains, about 55 miles southwest of Kirkuk. They were planning an attack on tribesmen who had formed anti-Isis brigades and had fled to the mountains when the jihadists seized the nearby town of Hawija in mid-2014.

Sheikh Anwar al-Assi, a chief of the local Ubaid tribe and supervisor of the anti-Isis forces, told The Times that at least eight fighters had hidden in dense reeds.“It is likely their movement disturbed a herd of wild pigs, which inhabit the area as well as the nearby cornfields,” he said. “The area is dense with reeds, which are good for hiding in.”

He said the incident had happened on Sunday shortly after the militants had put 25 people to death in Hawija. Security sources said that the killings had been ordered after several residents had tried to flee the town.

Hawija, home to more than 150,000 largely Sunni Arabs, is located east of the road from Baghdad to Mosul. It is one of only three strongholds over which Isis has complete control in Iraq, alongside Qaim and Tal Afar.

Refugees attempting to flee ISIS territory came across the mangled bodies of the three dead ISIS fighters, according to the UK Telegraph.

Joshua Yasmeh at the Daily Wire has some more very interesting insight into the ISIS pig-mageddon:

While local tribesman have urged Baghdad to expedite operations to liberate Kirkuk from the claws of ISIS, the vast majority of military resources have been deployed to Mosul as part of an ongoing operation to root out the last remaining holdouts of ISIS resistance in what was once the terror group’s de facto capital in Iraq.

Thus, the stampede of wild boars did what the government would not do: carried out an attack against the Islamist warriors of the caliphate on behalf of their country. It’s unclear if these nimble navigators were in direct contact with Iraqi intelligence services; the Mother of All Boars has yet to comment on the targeted strike. So far, ISIS religious experts haven’t issued any fatwas against the boars and have yet to announce whether the terror group’s devout fighters will receive their 72 virgins given the swine-led massacre.

That old saying is right. The Lord DOES have a sense of irony and he does work in mysterious ways.