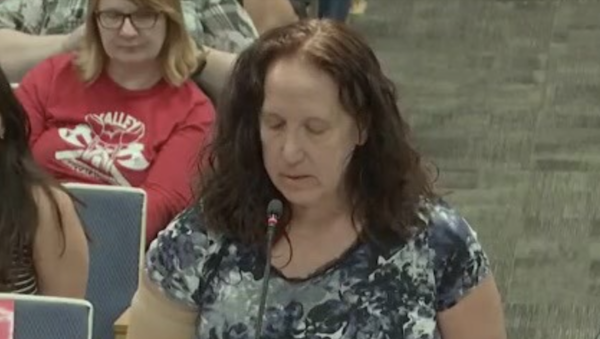 A Clark County mom went to a school board meeting to complain about the book her 15-year-old daughter was forced to use for an assignment. When she began to read from the book, she was shut down because they didn’t allow profanity during school board meetings (but it was okay in classes).

As reported on Channel 8 B News:

Kandra Evans appeared to be rattled as she stood before the CCSD board last week. She claimed her daughter was upset about what her high school teacher assigned her to memorize and say aloud in front of her class and shared a portion with the board.

“I don’t love you. It’s not you. It’s just that I don’t like d— or any d— in that case,” Evans read from her daughter’s assignment.

Members of the school board cut her off, turned the mike off, and criticized her for the explicit language.

Ms. Evans logically responded that her daughter was forced to read it and act it out in class. Continuing, she said, “adults can’t handle hearing this content, yet they readily give it to kids in school. We have pornography laws for minors in this state, and they were violated because of this assignment,”

In a tweet, the School officials said that they are investigating the circumstances surrounding the class assignment.

“While we are not allowed to engage in back-and-forth dialogue, we would like to get your concerns addressed,” a board member said in the meeting.

Ms. Evans said she didn’t want the teacher fired, but she hoped that by pointing the problem out the book wouldn’t be used again.

This is part of the liberal trend to change their curriculum to teach children issues parents would object to without consulting with parents first.