Helping Out Kamala: Appropriate American Tragedies For Her To Use In Her Next Speech 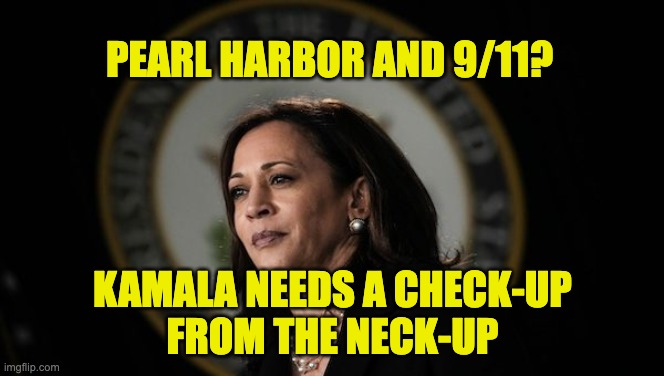 In her January 6, 2022 speech, Vice President Harris said the Jan.6 riot in the capitol was equal to the Japanese attack on Pearl Harbor that killed about 2,400 people and the September 11 attacks on N.Y.’s twin towers and the Pentagon, which killed almost 3,000 people (not including the people who died because of illness due to 9/11). Comparatively, one person was killed because of the riot. One of the protesters, Ashli Babbitt, an unarmed protester was shot and killed by a Capitol Policeman. Kamala Harris made hyperbolic comparisons

“Certain dates echo throughout history, including dates that instantly remind all who have lived through them where they were, and what they were doing, when our democracy came under assault,” Harris said. “Dates that occupy not only a place on our calendars, but a place in our collective memory: December 7th, 1941, September 11th, 2001, and January 6th, 2021.”

Personally, I believe the riot at the capitol was disgusting and an affront to all Americans. But that doesn’t change the fact that many feet the V.P.’s comments were hyperbolic, that she was trying to bend the truth and change public opinion toward the Democratic Party’s talking points.

“Your ‘collective memory’ is drowning in exaggeration,” Tim Graham of the Media Research Center tweeted in response to Harris. “The ‘independent fact checkers’ are taking the day off on this hyperbole.”

“VP Kamala Harris just equated the riot on January 6th to the terrorist attacks on 9/11 and the bombing of Pearl Harbor,” conservative Kansas radio host John Whitmer said. “These people are so asinine!

“Comparing January 6th to Pearl Harbor is unhinged. Thousands of American [sic] were killed by the Japanese that horrible morning, and the war in the Pacific Theater had a death toll of roughly 30 million,” tweeted David Hookstead, the Daily Caller’s sports and entertainment editor. “January 6th wasn’t good, but it didn’t result in a savage and brutal World War.”

I feel bad for the Vice President. Not only for the valid criticism of her analogy but because she must feel so lonely. Many people have quit their jobs because they didn’t want to work for Harris. Maybe it’s because of her cackling laugh.

I am a conservative who strongly disagrees with her socialist policies, but she is human. Feeling so bad for what must be Kamala’s hurt feelings, I came up with analogies she can use for her next political speech about the January 6 riots.

Here are some examples

Wait for a second! Biden isn’t senile enough to allow Harris to blame his policies. There is a need to provide her with a list of tragic days in American for her to use. But they can’t have anything to do with Biden’s policies.

Okay then, How about these ideas for Kamala that have nothing to do with Biden?

These are all tragic days in American history. Some of you may think it would be totally demented for the Vice President to use my suggestions. But if you feel that way, please explain why they are less hyperbolic than comparing January 6, 2021, to Pearl Harbor or September 11, 2001?