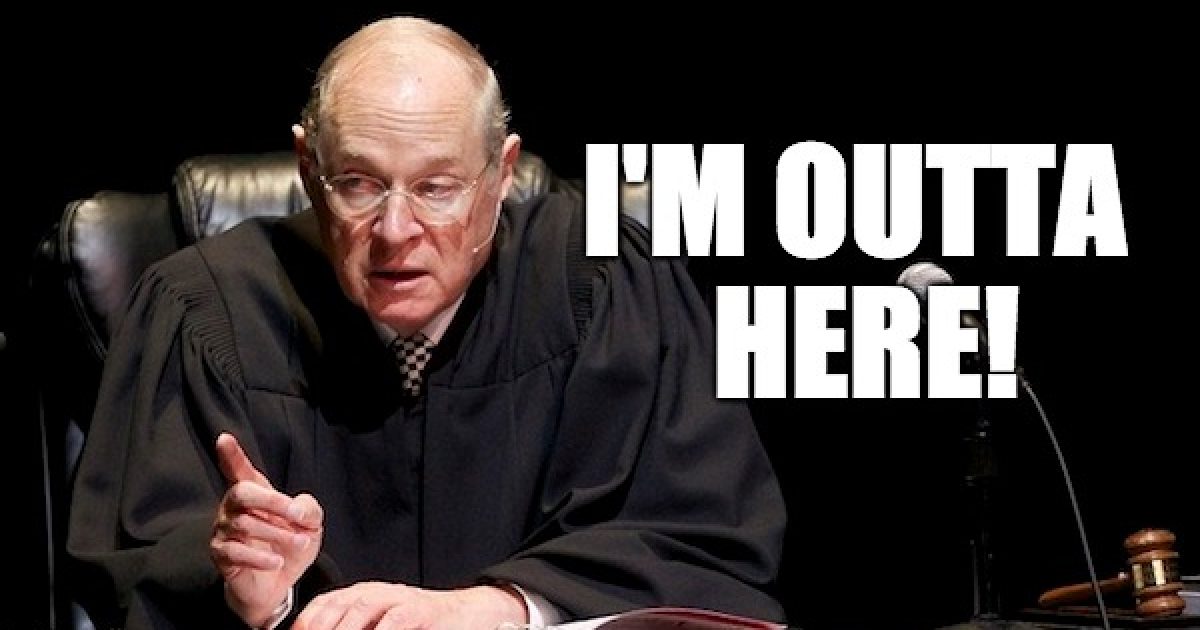 It’s been rumored for years, but it finally happened. Hours after the SCOTUS announced their last decision of the year Justice Kennedy announced his retirement–you know any confirmation hearings will be vicious and ugly. Soon after the announcement minority leader Chuck Schumer (D-NY) began the fight, speaking on the Senate floor criticizing any appointment Trump might make.

The Senator who wears his glasses like an old schoolmarm is correct on one thing, this is a very important decision the president has to make. More than anything else he does or will do, Supreme Court picks will be a major part of Donald Trump’s presidential legacy.

Kennedy was appointed to the court by President Reagan. He was the third choice, his first nominee for the seat was the brilliant  Robert Bork who was slandered by Ted Kennedy and rejected by the Senate on October 23,  choice number two Douglas Ginsburg, withdrew his name from consideration after admitting to marijuana use. Although he was thought to be a conservative, strictly faithful to the U.S. Constitution when appointed, Kennedy turned out to a swing vote siding with the liberals on key social issues such as abortion and same-sex marriage, ObamaCare and to limit the death penalty while voting with the conservative wing to protect religious liberty and restrict campaign finance laws.

If Trump appoints someone who is pro-life and a strict constitutionalist the Democrats will create ad hominem attacks trying to disparage the nominee’s reputation as they did with Bork and Clarance Thomas. If you think the hatred coming from the Democrats is bad now…just wait. No matter who is appointed this will the most contentious, most disgusting confirmation battle in the history of this country–its what Democrats usually do–but this appointment will have a pivotal decades-long effect on Supreme Court decisions.

During the Reagan administration,  Democrats in the Senate led by Senator Ted Kennedy didn’t just object to the Bork nomination, they did their best to slander the man, vilifying him as evil. This infamous quote of Ted Kennedy’s was spewed even before the Senate held hearings and  presented the worst of the slanders:

“Robert Bork’s America is a land in which women would be forced into back-alley abortions, blacks would sit at segregated lunch counters, rogue police could break down citizens’ doors in midnight raids, schoolchildren could not be taught about evolution, writers and artists would be censored at the whim of government, and the doors of the federal courts would be shut on the fingers of millions of citizens for whom the judiciary is often the only protector of the individual rights that are the heart of our democracy,”

That was the same Kennedy who was not only responsible for the death of Mary Jo Kopechne but according to one biographer enjoyed jokes about the tragedy, and who during Reagan’s first term told Russia that in the interest of world peace, he would help them fight against President Ronald Reagan’s “militarism.”

Siding with the corrupt Ted Kennedy, Bork’s nomination was rejected by the Senate in a  58-42 vote. What worked for Bork, was tried for Clarence Thomas (remember Anita Hill) and thankfully failed.

In 2006 when Justice Alito was nominated to the Court, Sen. John Kerry (D-MA) Led an unsuccessful  filibuster and did his best to smear Alito  saying:

“Judge Alito will take America backward, especially when it comes to civil rights and discrimination laws. It’s our right and our responsibility to oppose him vigorously and to fight against this radical upending of the Supreme Court.”

One of the Senators who supported Kerry’s effort was the Junior Senator from Illinois Barack Obama. January 29, 2006, Mr. Obama told Democratic Party operative George Stephanopoulos on “This Week” that he would “be supporting the filibuster because I think Judge Alito, in fact, is somebody who is contrary to core American values, not just liberal values, you know. When you look at his decisions in particular during times of war, we need a court that is independent and is going to provide some check on the executive branch, and he has not shown himself willing to do that repeatedly.”

Look for Trump to appoint a conservative like Gorsuch who has a strong constitutionalist background but no track record of ruling on life or issues that could be attacked by the Senate. Keep in mind that while the GOP has a 50-49 lead (assuming McCain doesn’t come back soon), Republican Senator such as Susan Collins who is pro-abortion will not vote to approve an overtly pro-life judge.

Trump may wait till after the midterms to announce a replacement for Kennedy until AFTER the midterms so it can motivate conservatives in the midterms. Especially after the past week of 5-4 decisions where Justice Gorsuch was the deciding vote, the possibility of ensuring that Trump gets to pick another justice will be a strong rallying point for the base. On the other hand, he has a one-seat Republican majority in the Senate right now, and he won’t hold off unless he is 100% sure the Republican majority holds.

There are NO official qualifications to be considered for the Supreme Court. Technically, there is nothing to keep ME from being nominated (except that it would a stupid nomination)! I would suggest the President nominate my friend Ed Morrisey from Hot Air.

Trump has already crafted a list of candidates in the event of an opening (see below), and each possible nominee would shift the ideological balance of the court closer to a strict interpretation of the constitution for years to come.

Below Kennedy’s resignation letter to the POTUS the list of 25 judges who President Trump says he will pick from:

Letter 0627 by Jeffrey Dunetz on Scribd