The Anti-Semitic Blood Libel Still Exists, Even Here in America

It started 3,500 years ago in the land of Egypt: ” we were slaves to Pharaoh in Egypt,” the story of Exodus says. The 10th and final plague hit the firstborn sons of every Egyptian. To avoid the plague Jews smeared the blood of a slaughtered lamb on the doorposts of the Jewish homes, the death passed over them. Since that day, The Passover blood libel has followed us everywhere we go and continues even today, al-Durah, nuclear tipped warheads in Lebanon, targeting innocent children in Gaza etc.

And these libels are being perpetuated by the established media such as the BBC, CNN and the NY Times, on line at sites such as Daily Kos and Huffington Post and even at Universities throughout America.

Josephus tells us that already in Roman times, the Greeks spread rumors that the Jews slaughtered a Greek in the Temple in Jerusalem and ate his intestines as part of our rites.

In 12th-century England, there were repeated stories of children being killed by the Jews for ritual purposes.

The tale was usually the same. The holiday of Pessah is celebrated in spring; the unleavened bread is an integral part of the feast. The ugly rumor proclaimed that the matza was not fit for use unless the blood of a Gentile child was kneaded into the mixture.

What makes this Libel particularly disgusting is that the Torah expressly forbids the ingestion of blood. For example Leviticus 17:10-14:

Though today the story changes a bit, “horrible Israeli soldiers deliberately killing children,” usually accepted by the mainstream and spread by the media without question even though they are false. One such blood libel the al Durah hoax, where a young child was supposedly shot by Israeli forces,

was picked up by the world media and incited a Palestinian intifada which caused the deaths of more than a thousand Palestinian and Israeli citizens. The only problem was the entire thing was staged by a Palestinian Cameraman who worked for one of the French TV Networks.

There are countless examples from the Jenin “Massacre” that never happened to the lies in the Goldstone report.

A most recent example was MJ Rosenberg’s libelous claim that a Palestinian infant died because of an Israeli refusal to supply Gaza with power. Everything about his claim was a lie, but that didn’t stop MJ Rosenberg from spreading the libel.

Despite all this the children and adults throughout the Muslim world are taught that Jews kill non Jews for their blood:

his came from Saudi Arabian TV that Moderate country:

Its not just Arabs who are brainwashed with this false narrative, it is also part of the language of the progressive left. 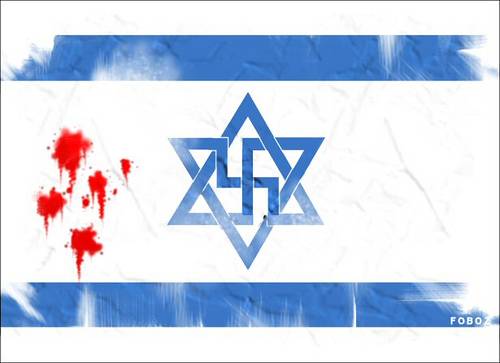 The cartoon above, showing a bloodstained Israeli flag with the “Jewish Star” morphed into a swastika, is posted on the Daily Kos. It’s part of a post called “Eulogy before the Inevitability of Self-Destruction: The Decline and Death of Israel,”
which warns of “A Zionist movement multiplying like cancer cells”. This
post and cartoon was still on the site as of 9/7/10, despite the fact
that the Kos posting rules say Diaries which contain hateful or defamatory writing are prohibited 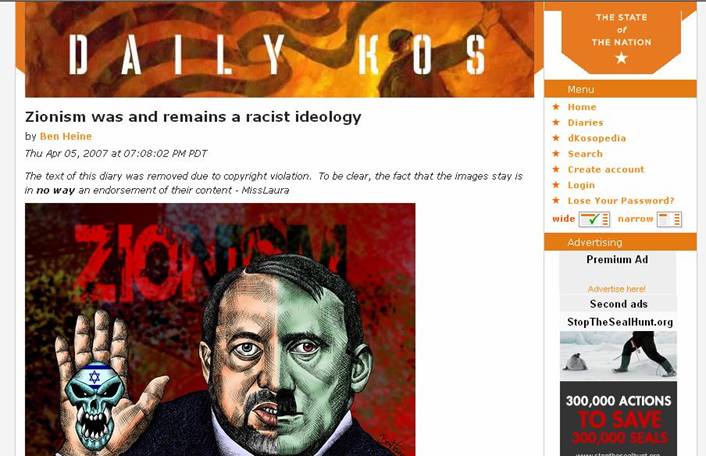 This was the Daily Kos illustration for the post, “Zionism was and remains a racist ideology,” It shows Israeli foreign minister Lieberman as Adolf Hitler. This post was pretty popular attracting 564 comments, many of them defending the cartoon. One comment suggested that “the artist was not claiming Jews are Hitler. He was comparing the behavior of Avigdor Lieberman to Hitler.” Yet the word Zionism in blood and the Skull with the Star of David, belie that claim.

Americans for Peace and Tolerance/On Campus released a video documenting the blood libel being taught at Northeastern University. In the video (embedded below) Northeastern professors and their invited guest lecturers are seen comparing Israelis to Nazis and denying Jewish peoplehood – on tape recordings and in internal emails. Ironically some making these claims were invited by professors holding the Stotsky Professorship in Jewish Historical and Cultural Studies, established specifically to study the genocide of European Jewry.

“Northeastern is a popular and respected school,” said APT President, Charles Jacobs, “but there does exist a problem – mostly confined to a few anti-Israel radicals among the professoriate and the administration. These individuals have used a chair donated for the purpose of teaching students about the genocide of European Jews to demonize and delegitimize the state of Israel and its supporters.”

Jacobs said, “It is extraordinarily unscholarly, insensitive and hurtful for university professors to invite speakers who tell Jewish students in front of their classmates that Jews today act like Nazis. It is outrageous that somebody who denies Jews the right to self-determination and compares the Jewish state to Nazis is responsible for commemorating the Jewish genocide.”


“It is also very troubling,” he said, “that some Jewish faculty members are too intimidated to speak publicly about these issues, and that some Universities use   ‘academic freedom’ to shield bigoted professors who defame the Jewish community.”

I have always said there is a difference between being anti-Israel and anti-Semitic, but there is a huge crossover.   When progressive websites, the mainstream media, the UN and even academics take the ancient blood libel and modernize it and exploit it to tell untruths about Israel it is no longer a criticism of the Jewish States policies, it is anti-Semitic blood libel.  When they make the false comparison between Israel and the Holocaust they are not only trying to de-legitimize the Jewish State, they are trying to cheapen the memory of the Holocaust.

Sadly the blood-libel still exists in the modern world, in the Arab Nations, in Europe and most surprisingly,  here in the United States of America.