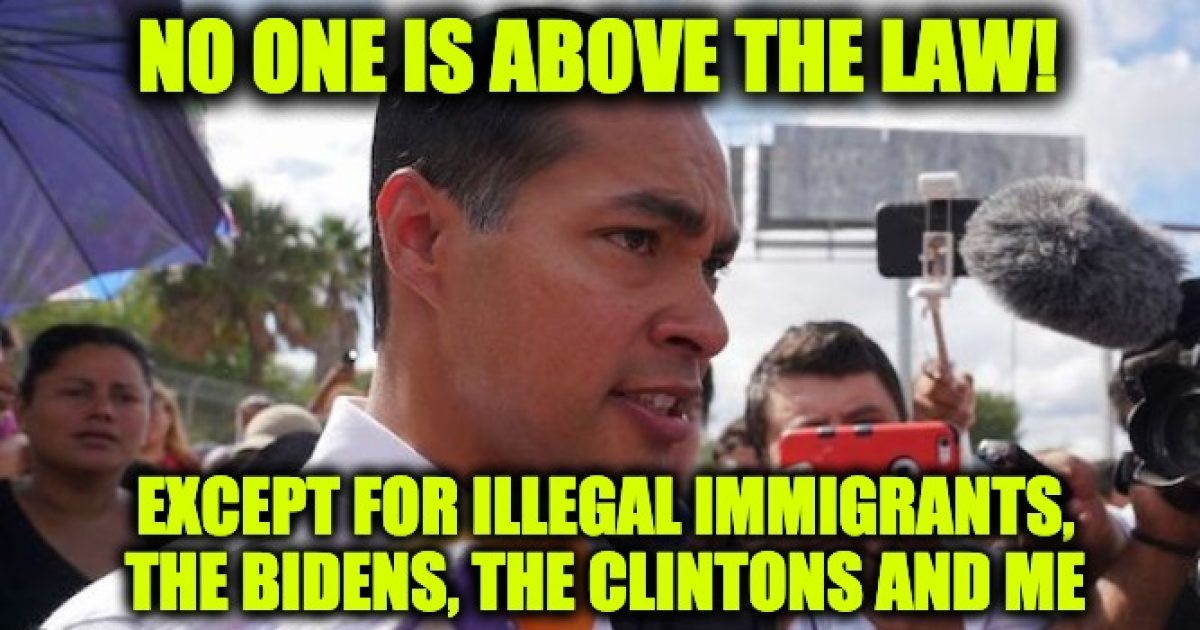 Julian Castro, a Democrat candidate for President in 2020 who according to the RCP average has 1% of the vote, is trying to get some recognition for his campaign   So he tried to pull off an illegal immigrant stunt at the southern border that failed worse than his presidential campaign so far. Julian Castro illegal alien

Castro headed to the southern border near Brownsville, Texas on Monday, where he and a group of officials representing the Texas Civil Rights Project escorted migrants to border patrol agents in the hopes of having them released in the country pending process of their asylum claims.

The group of illegals allegedly were members of the LGBT community or disabled, according to Castro, some of whom had been “beat up.”

Because some of them were beaten up he thought they should be exempt from the ‘Remain in Mexico’ policy until their cases could be adjudicated. Prior to this effective policy, migrants were released in the States, but instead, stay south of the border while that process plays out.

Sorry Julian but I believe because they have been beaten up, the NY Jets should be exempt from playing any team with a winning record—that ain’t happening either.

It makes one wonder if the President’s southern border wall is finished can they take some of the left-over supplies and build one around Julian Castro?

Castro filmed himself at the border discussing the humanitarian crisis he and his party just months ago were saying was a figment of the President’s imagination.

For Donald Trump, the cruelty is the point.

His immigration agenda has created the conditions on our border—conditions only bound to get worse. We are better than this. pic.twitter.com/Uq57Ubc8XZ

I see that you broke the law. Need to turn yourself into the @FBI and @DHSgov

Castro then took the AOC route, claiming the administration was intentionally killing migrants.

“What I saw in across the border in Matamoros, Mexico is a national embarrassment – one entirely of Trump’s creation,” writes Castro. “Make no mistake: his agenda is killing people – and it’s on purpose.”

Actually, one could argue that by refusing to acknowledge the crisis, then refusing to provide funding for a border wall or working with the President in any manner, it is the Democrats who willfully allow people to die unnecessarily at the border.

Watch Castro failed effort to bring illegals into the country below …

.@JulianCastro is speaking to CBP officials right now. Agents went back into their offices. We are waiting to hear back if our clients will be allowed into the United States to pursue their asylum cases. #LetThemIn pic.twitter.com/6CPjxUtya0

The Castro stunt was not greeted positively on Twitter:

Here is an idea. All you that want illegals in this country, agree that you will fully support the families including housing, food, and healthcare with no taxpayer funds. Our taxes should be helping homeless vets who fought for this country.

This has ZERO to do with civil rights! They have no legitimate claim! Just stop. US citizens don’t want this on the whole. This is subversive. There’s nothing righteous about what you’re doing. You’re probably all marxists.

The Texas Civil Rights Project confirmed that the stunt was a failure, as all of the migrants were sent back to Mexico.

“We just heard the terrible news that all 12 of our clients escorted by [Julian Castro] were sent back to Mexico. This is, of course, a mockery of due process,” they fretted.

“As soon as the reporters left to file their stories, CBP released the asylum seekers back into Mexico,” they explained.

BREAKING: We just heard the terrible news that all 12 of our clients escorted by @JulianCastro were sent back to Mexico. This is of course a mockery of due process. Here is our statement on the matter:#LetThemIn

Perhaps worse: Castro used these people – likely without their knowledge or consent – for his own political purposes.

This is excellent news. Only way it could be better tho, is that the privileged leftist Julian had been arrested for his actions. But we all know lefties are above the law.

When your best effort to raise the profile of your failed campaign is to traffic migrants into the country illegally and you fail miserably, maybe that’s the time to hang it up. After all, other Democrats break laws far more effectively than this.

This past summer, Castro was questioned by a woman who said an illegal immigrant stole her Social Security Number.

“He was caught and released on his own recognizance, and never to be heard from again,” she explained during a town hall event.

“Would you be willing to penalize offenders taking advantage of Americans by having them not released if they’re known to be illegal?” the woman asked.

It certainly does, and there’s video evidence above to show it. Human trafficking, illegal border crossing, lying to federal agents, are all on Castro’s resume now. And the fact that he is not in jail is proof the Democrats don’t really feel that no one is above a law.