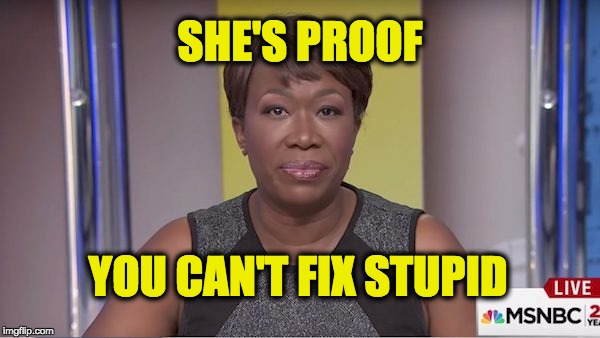 It seems the alt-left anti-Trump propagandists in the Democrat-media complex will do or say anything to foment hate and violence against President Trump.  On Friday, MSNBC propagandist Joy Reid failed history and geography in a xenophobic attack on Trump and all the women he has been married to.

“Donald Trump married one American (his second wife) and two women from what used to be Soviet Yugoslavia: Ivana-Slovakia, Melania-Slovenia,” she tweeted.

Donald Trump married one American (his second wife) and two women from what used to be Soviet Yugoslavia: Ivana-Slovakia, Melania-Slovenia.

It’s hard to determine what her point was, unless she was trying to push the Russia-Trump conspiracy theory.

Besides that, her attack was xenophobic and misogynistic.  And probably racist as well.

The blatant xenophobia aside, Czechoslovakia was not part of Yugoslavia, and neither were in the USSR@JoyAnnReid https://t.co/HGFs6egEY1

Overlooking Joy Reid’s ignorance about the USSR, how did she confuse Slovakia with Yugoslavia? Czechoslovakia has “Slovakia” in its name…

According to his Twitter bio, Norton writes for AlterNet, hardly a bastion of conservatism…

She does work for MSNBC and regularly interviews Maxine Waters, so…

You might want to double check that whole “Soviet” thing. pic.twitter.com/1wxThjaF98

This would be like Russians accusing you of being American spy for marrying someone from Brazil?

So immigrants are good, unless they’re successful, beautiful, don’t hate America, and marry a Republican?

Another person reminded Reid of a statement on her own Twitter bio:

Reid said she corrected her tweet, but that didn’t stop the mockery:

Donald Trump married one American (his second wife) and two women from what used to be Soviet Yugoslavia: Ivana-Slovakia, Melania-Slovenia.

One has to ask — Why didn’t she get it right to start with?  After all, she’s part of the cabal that tells us they and only they have facts.  The rest of us are just ignorant rubes, at least in their eyes.

The reason is clear.  Being part of the Democrat-media complex, Reid apparently doesn’t believe she has any need to get anything right as long as she can twist it to fit her anti-Trump narrative.

This, by the way, is a huge part of the reason why so many no longer trust the so-called “mainstream media.”