As They Say, The Truth Hurts 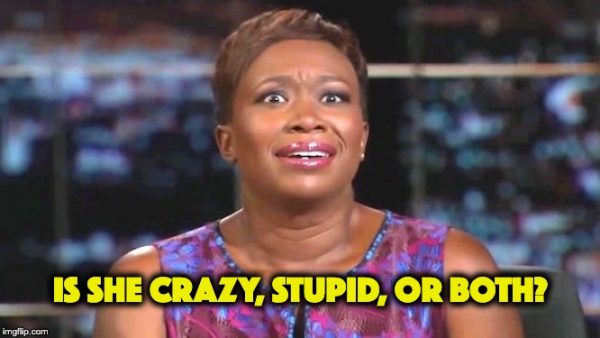 Donald Trump Jr. offered indisputable facts proving that MSNBC host Joy Reid should not be allowed without a helmet. He was responding to Reid’s contention that the attack on a U.S. Embassy in Baghdad earlier this week, “Trump’s Benghazi.” Joy Reid Embassy Attack

Violent mobs were organized Tuesday by Iran in response to an airstrike by the U.S. military over the weekend that killed dozens of Iran-backed militia members. The military strike was in response to the death of an American contractor last week when the militia fired a rocket at an Iraqi military base.

The pro-Tehran mobs stormed the embassy wearing militia uniforms, shouting ‘Death to America!’ and managed to smash security cameras, break down a door into the reception area, and set the room on fire.

Reid upset that the President can multitask on Twitter, retweeted a satirical account that automatically turns Trump’s tweets into ‘official’ press releases. This particular one happened to mention the Ukraine call transcripts.

“As Trump’s Benghazi unfolds in Iraq …” she snidely added to the retweet.

As he is known to do from time to time, the President’s son stepped in to offer the mainstream media and Joy Reid a little dose of reality. Or, as we like to call them – Facts.

Trump Jr. noted the swift and decisive actions taken by the President as the attack on our embassy in Iraq was unfolding.

“‘Trump’s Benghazi’ was handled with decisive action, like an actual leader would respond,” Trump Jr. wrote. “The response (since they actually bothered to respond, unlike Obama/[Hillary]) was really the anti-Benghazi response!”

“Trump’s Benghazi” was handled with decisive action, like an actual leader would respond. The response (since they actually bothered to respond, unlike Obama/Crooked) was really the anti-Benghazi response!

He left out the fact that President Trump didn’t pass along the lie that the attack was caused by a lousy YouTube video.

It’d also be obvious to most Americans (other than Reid) that no lives were lost on Trump’s watch.

Secretary of State Mike Pompeo also explains why it’s the Obama administration who is responsible for this embassy attack.

Some of that money likely helped fund the organized mobs who attacked the embassy. In other words, not only is this not ‘Trump’s Benghazi,’ but it could more accurately be described as ‘Obama’s second Benghazi.’

The President on Wednesday had this to add: “The Marines came in. We had some great warriors come in. They did a fantastic job. This will not be a Benghazi. Benghazi never should have happened. This will never, ever be a Benghazi … They will pay a very big price for any damages incurred.”

Unlike the previous administration which spent more time lying and covering up what really happened, than helping the American personnel under attack. President Trump not only sent Marines to protect the embassy when it was under attack but on Thursday night he ordered the military to kill Iranian General Soleimani, the man who was responsible for the attack