Joy Behar Proves She is Dumber Than Plant Life

It is kind of hard not to criticize Joy Behar, especially when you realize that her I.Q. is lower than co-Host Barbara Walter’s age.  It is a wonder that someone this stupid is let out of the house without wearing a helmet, and she is on two different TV shows. Its like everyone else in the world who wanted to be on TV died all of a sudden an there was no one left.  Today, though today Behar outdid herself. Today she proved that someone could have a lobotomy without anyone noticing.

Today the ladies on the view were talking about the firing of Gilbert Gottfried from his position as the voice of the Aflac Duck. The insurance company was not happy about Gottfied tweeting this joke out to his followers.

“I just split up with my girlfriend, but like the Japanese say, ‘They’ll be another one floating by any minute now’).

The joke was disgusting, but to be honest Aflac knew what they were getting when they hired him, Gottfried was also famous for being the first comedian to tell jokes about 9/11. Gottfried was performing at a roast of Hugh Hefner just three weeks after the September 11 attacks. He began his monologue joking that he had intended to catch a plane, but couldn’t get a direct flight because “they said they have to connect with the Empire State Building first,” earning catcalls from the audience of entertainers.

Behar’s mistake however had nothing to do with a misplaced attempt at humor, she was serious when she said horrible things today (H/T Noel Sheppard)

JOY BEHAR: I don’t know, maybe people who just need relief from the terror of it all. I don’t know, but I mean, I’m sure people in concentration camps made jokes about each other, about the Nazis, about their situation. That’s the way people relieve stress.

SHEPHERD: You said people in concentration camps made jokes? Now, I don’t know if they did or not.

BEHAR: I’m sure they did.

Only in the sick mind of Joy Behar can it be imagined that people in concentration camps would blurt out something like, ” a funny thing happened on the way to the gas chamber….”

Here’s one account of a man named Pincus ask yourself if you think Pincus was running around being a real cut-up:

When we left the ghetto, they put us on cattle trains. They packed 100 to 120 people into a sealed car. There was no food on the train. Fortunately it took us only about two days to get to the concentration camp. Train from places farther east or south, like Greece, sometimes took ten days. Many of the people on these trains did not survive the trip. 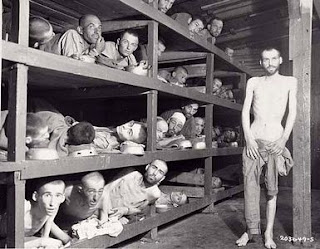 It was dark, but I could see the people to the left were mostly elderly or young children, so I realized that we were going into the camp. Inside the camp first they shaved our hair. We were stark naked and they tattooed us. I am 161253. They gave us cold showers. It was November. Bitter cold. Then they put us in striped uniforms and took us into Birkenau (Beer-Kin-Now), the killing center at Auschwitz. I was fortunate. After I had been there four weeks, they picked several hundred men to go to Bunno, another part of Auschwitz. It was a labor camp and they gave us a little better food. The barracks were a little nicer. There were about 300 or 400 men to a barrack. We had double or triple bunks. The bunks were actually single beds, but two people had to sleep on one bunk.

The capos woke us at five o’clock each morning. The capos were prisoners who were in charge of the barracks and the work groups. They were mostly Germans, Poles, and some Jews. The Nazis assigned them to guard us. In the morning they gave us one piece of bread mixed with sawdust to eat. We also got a piece of margarine and a cup of coffee. It was not real coffee. We had to work until the evening. In the evening we got soup. If we were fortunate, we might sometimes find a few potatoes and a piece of meat in the liquid. Most of the time it was just hot water and a few potatoes. For that we had to work 9 or 10 hours a day. When we first came there, we worked unloading gravel and coal from trains. If you didn’t finish your assigned task, you got a beating. We were clothed in an undershirt and a thin, striped coat. We worked outside when it was often 10 to 15 below zero. People just froze to death.

The hunger was also terrible. We used to search for a potato peel and fight over it. We were constantly, 24 hours a day, always hungry. We would think about food and dream about it.

Every few months we had what they called a selection. They came into the barracks and picked out the people who looked very skinny and couldn’t work anymore. They looked you over, and if they didn’t see much fat on you, they put down your number. The next morning they came with trucks, picked up these people and put them right in the crematorium. It was heartbreaking.

They put us on a cattle train in Gleiwitz and took us to Germany. it took 10 days. They packed us about 150 people to a car with no food. Fortunately for us the cars were open. Everybody had eating utensils. I had a string. At night while the German guards were sleeping, we attached the string to a plate and scooped up snow. That kept us alive. You can live without bread for a long time but not without water. Finally we got to Nordhausen, a large German concentration camp. We were there about 10 days, and then they sent us to a camp called Dora in the mountains. The Germans were making V2 missiles there. We did hard labor, digging tunnels into,the mountains. We worked there from the end of January until April, 1945.

Doesn’t the stupid, stupid person have the slighted sense of decency? I could almost understand if Behar, like the subject of her discussion, Gilbert Gottfried made a stupid joke, but this was a product of her “rational” mind. Sadly that part of her brain function is in a severe state of disrepair.