Jorge Ramos: ‘This is Our Country, Not Theirs’…Not a ‘White Country’ 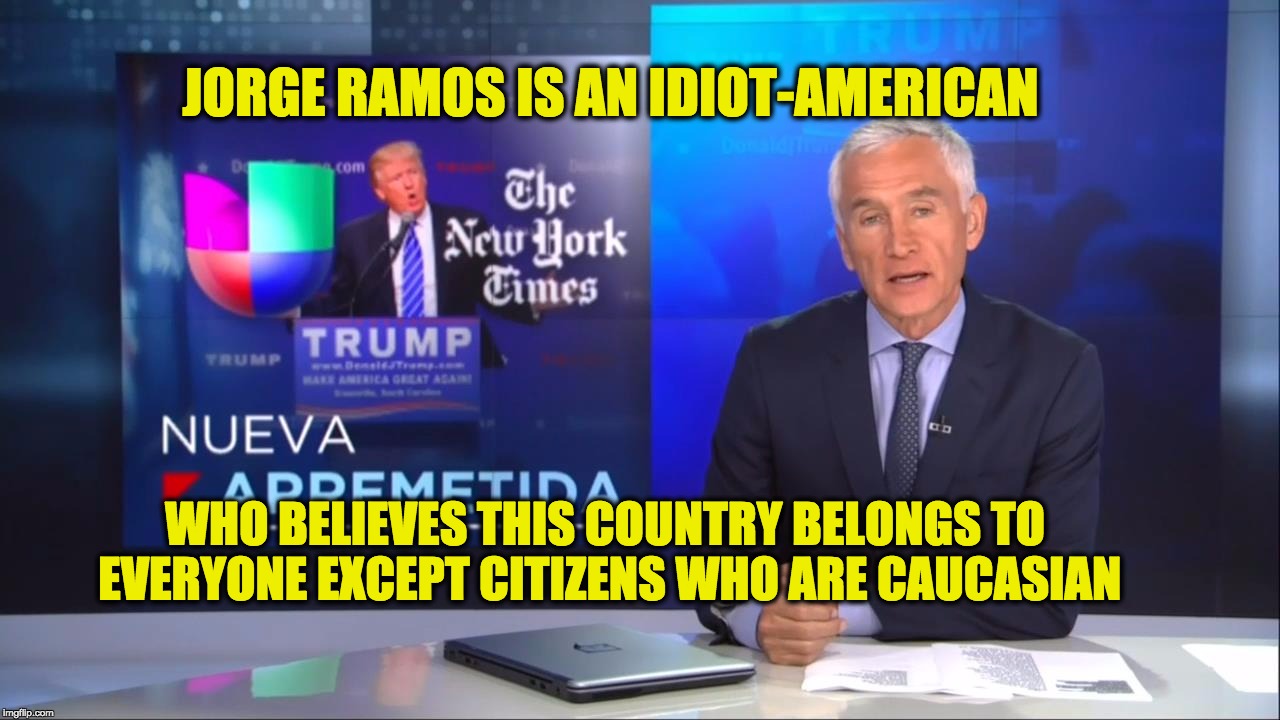 On the Tucker Carlson show Wednesday Jorge Ramos demonstrated he cares much more about being divisive than being American.

“I’m a proud Latino immigrant here in the United States. You know exactly what is going on here in the US. There are many people who do not want us to be here and who want to create a wall in order to separate us. But you know what, this is also our country. Let me repeat this, our country, not theirs, it’s our country.”

What exactly did Mr. Ramos mean by saying that this is not “their” country? Who’s the “our,” and who’s the “their?” Apparently “their”  is anybody who votes differently than Mr. Ramos.

In an interview with Tucker Carlson, Ramos said that by “their” he was talking about people who support President Trump. So if you are an American citizen with a Latino background who voted for Trump, I guess Ramos would say they have no stake in the United States:

“The interesting thing is with the Trump administration and many people who support Donald Trump they think it is their country, that it is a white country, and they are absolutely wrong.” He said that the country doesn’t belong to those people. “This is our country, it is yours, it is mine and it is ours,” he said.

He went on to say that 27 years from now, the U.S. will no longer be a white majority country:

It is attitudes like those of Mr. Ramos and those of other liberals that is creating the divide in this country. Liberals try to segment the population, every one needs a hyphen.  But Ramos and the liberals are wrong, there aren’t Latino-Americans, Asians-Americans, African-Americans, Caucasian-Americans, etc.  I am a proud member of the Jewish faith, but I am not a Jewish-American. I am an American–a proud American, that’s what unifies all the citizens of this great land.  We are not homogeneous, we have different ethnic backgrounds, faiths, political preferences, etc.  But we are ALL Americans, and as much as I disagree with divisive Mr. Ramos, he is an American also. This country belongs to all of us today, and in 2044 when there are more people of Latino, African, and Asian backgrounds, than people of Caucasian western European backgrounds, it will still be all of our country…even including idiot-Americans like Mr. Ramos.

But not to Jorge the divider…if you’re someone who disagrees with Mr. Ramos, then regardless of where you were born, this is not ‘your’ country, and you should have no right to try to shape its immigration policies.

But if you do agree with him, then it is your country, and you should have right to dictate immigration policies.