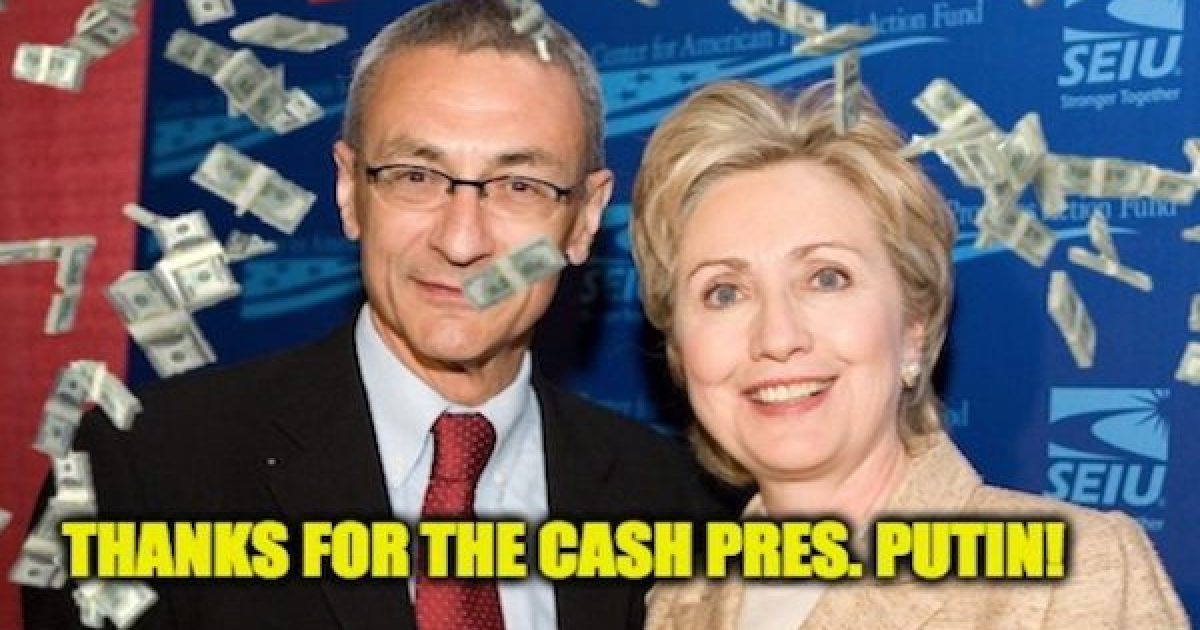 The liberals may be right to be worried about all of those “Russia connections.” However, instead of focusing their time and energy on President Donald Trump and his campaign team, liberal conspiracy theorists should be vetting their own team for these Russia ties, specifically Clinton campaign CEO John Podesta. And special prosecutor Mueller is on their trail.

The Democrats keep pointing to Paul Manafort’s lobbying work for pro-Russian leaders in Ukraine as evidence of team/Trump Russia collision. They also point to the fact that at first Manfort didn’t register as a foreign agent of Ukraine. Well. if Manafort is guilty of collusion so is John Podesta, because Podesta’s firm worked on the same project as the Manafort team and they too forgot to register as a foreign agent.

Two of the firms, Podesta Group and Mercury LLC, worked in Washington with Manafort partner Rick Gates, according to lobbying disclosure records. Three other firms worked in Europe, the executive said. NBC News could not confirm the identity of those three.

At the time, Ukraine was run by a pro-Russian political party that had paid Manafort $17 million for consulting in 2013 and 2014, according to Manafort’s latest foreign lobbying disclosure filing, which he filed belatedly under Justice Department pressure.

They finally registered in August:

The Podesta Group belatedly filed several new disclosures with the Justice Department on Aug. 17 related to work the firm completed between 2012 and 2014 on behalf of a pro-Russia Ukrainian think tank.

Back in April, the powerful Washington lobbying firm run by Clinton ally Tony Podesta filed a document admitting its work for the pro-Russia European Centre for a Modern Ukraine may have principally benefited a foreign government. New disclosures revealed dozens of previously unreported interactions the firm made with influential government offices, including Hillary Clinton’s State Department and the office of former Vice President Joe Biden, while lobbying on behalf of the center. Embattled ex-Trump campaign manager Paul Manafort failed to disclose his extensive lobbying efforts on behalf of the center at the time as well.

Now we learn the special prosecutor has invited members of the Podesta group to testify. Well, the news is kind of buried. For example, NBC News roaring headline is, “Mueller Seeks Grand Jury Testimony from PR Execs Who Worked With Manafort” You have to get down near the end of the article to learn that some of those PR Execs Mueller want to speak to, worked for Podesta. Any accusations against Manafort also apply to Podesta.

And this is not the first time Podesta’s relationship with the Russians have been outed. Back in March, we learned Hillary’s campaign head failed to disclose that he got 75 thousand shares in stock from a Kremlin-financed company that he was the director of from 2010 to 2014 when he left to join the Obama Administration. Nothing to hide, except that in 2013 Podesta started a shell company and transferred the shares into it so he would not have to report them as a foreign interest before he went to Obama’s regime. Nothing to see here, right?

Oh, and John’s brother Tom was paid over $24 million as a lobbyist for Sberbank. It seems this Russian bank was looking to have sanctions lifted that were placed on Russia by the Obama Administration. Both Podestas were lobbying for relief and believing Mrs. Clinton would make things happen. A little curious?

Here’s the real truth…there is no proof that anyone on the Trump Campaign had an improper relationship with Russia, perhaps though, Hillary’s campaign did. Perhaps Russia…at least Russian supporting Ukrainians were trying to interfere with the election to elect Hillary.  Sounds crazy? Maybe not.