John McCain: Only An Insane Person Would Compare The United States Of America To Iran 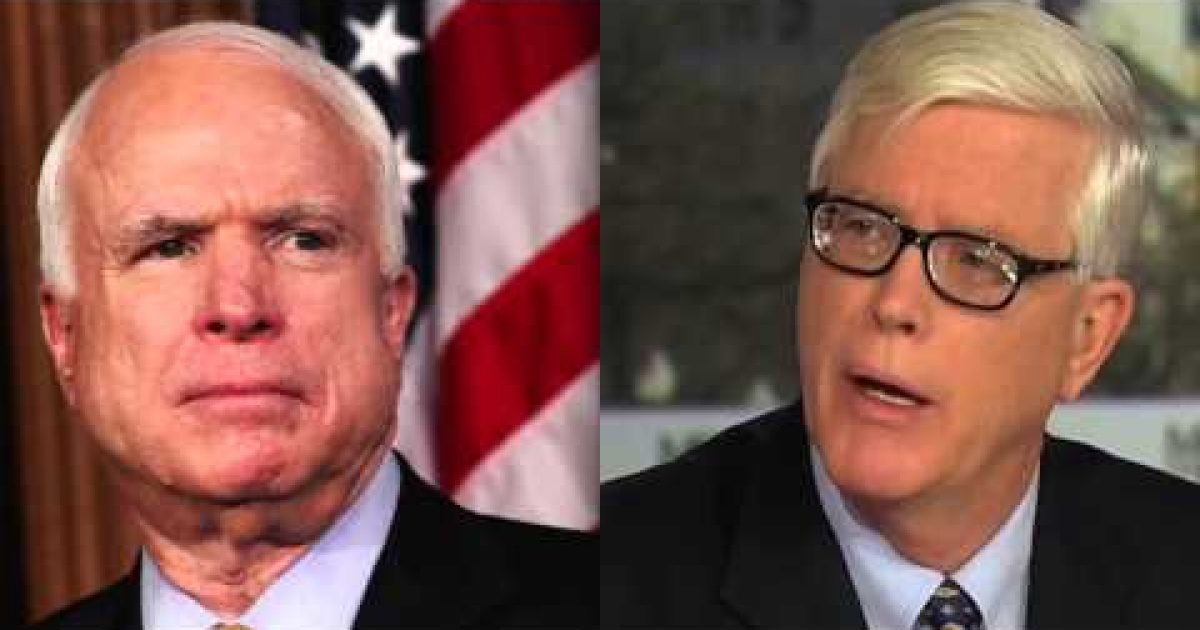 Regular readers of this site know I am not a big fan of John McCain. But sometimes when talking about foreign policy the Senior Senator From Arizona sounds brilliant. Take Thursday night for instance, the crabby Senator from Arizona was interviewed on the Hugh Hewitt Radio Show. And instead of attacking other Republicans as he does so often…he attacked Obama’s recent Iran deal.

Hewitt: Well now, let’s turn to the Iran deal. Today, the Supreme Leader, Ayatollah Khamenei, said that the deal is no deal unless sanctions come off on day one, the same day Iran’s defense minister, Brigadier General Hossein Dehqan said, “visits to our military centers is among our red lines.” Now I just think the hashtag #dontgoback is, I wouldn’t go back to the negotiating table. They just killed the deal, Senator McCain.

McCain: You know, they, in a way, you’ve got to give them a little sympathy in this respect, in that John Kerry must have known what was in it, and yet chose to interpret it in another way. It’s probably in black and white that the Ayatollah is probably right. John Kerry is delusional. And he came back, and in my view, I think you’re going to find out that they had never agreed to the things that John Kerry claimed that they had. So in a way, I can’t blame the Ayatollah, because I don’t think they ever agreed to it, and I think John Kerry tried to come back and sell a bill of goods, hoping maybe that the Iranians wouldn’t say much about it. But look, it’s delusional, and the worst thing about it, as we have talked before, Hugh, is that they believe that with this deal, somehow there’s going to be a new alignment in the whole Middle East, and we’re going to be partners with the Iranians. Well, you can imagine the reaction of the Sunni Arabs to it. when we had a hearing with General Austin, who is the head of Central Command that has responsibility there, I asked him in the hearing. When the Saudis started the bombing of Yemen, as you recall some days ago, and I asked him, when did the Saudis tell you that they were going to bomb Yemen, he told me one hour before. Now they have lost all confidence in the United States. They see this cozying up to the Iranians, and they are having to go their own way. And part of going their own way, by the way, is having their own nuclear capability. And the consequence of that long term are really very, very dangerous.

Hewitt: Now Senator McCain, you’ve got a lot of friends on the other side of the aisle. Two of them this week, Chuck Schumer and Tim Kaine, said they’re going to support the Corker bill. How many others have come over to you after the Supreme Leader’s declaration today and this declaration from their defense minister, the equivalent of their Ashton Carter saying you don’t get to come on our bases, and said you’re right, John, we have to kill this thing? Have any of them come to you and said that privately that they will get on board when Corker comes to the floor?

McCain: Not yet, but this is bound to have some effect, Hugh. This has got to have some effect. It reveals that a number of things about John Kerry’s negotiating capabilities and also his candor with the American people. From what I have known, and I’m not the vote counter, but we were within one or two votes of 67. Remember, our dear listeners, that it requires 67 to override the veto of the president of the United States. And he’s already said he would veto this. I think we are extremely close. And I’ve also heard of a little pushback, too. Nothing is ever sure, but we’re well over 60, at least according to everybody that I talked to.

Hewitt: Boy, with the Supreme Leader being so candid, I just can’t imagine a Democrat standing up. If you had won in 2008, Senator McCain, would we be at this negotiating table?

McCain: Never. My friend, we would be sticking with those sanctions until they abandoned what is the most dangerous thing about Iran, and that is their spread of terrorism throughout the world. Hugh, they are, now control Lebanon with Hezbollah. They now control Syria with their influence of Bashar Assad and propping him up when he was about to go under. They have now, with their Houthis, taken over in Yemen to a very large degree. And in Baghdad, they are the predominant force now in Iraq. They are on the move. And by the way, I’d ask our listeners to grab a map and look at where Yemen is situated. You can see why the Saudis cannot afford to lose Yemen, because that gives them control of a waterway where a lot of the world’s energy supply passes through. And it’s going to be very interesting to see whether the Saudis with air power alone are able to turn back these Houthis, and the al Qaeda folks are playing, are fishing in troubled waters, and you’re seeing a resurgence of al Qaeda in the Arabian Peninsula. So I mean, you know, I knew that things were going to be bad when I lost in 2008, okay? But if you take a look at the map of the world in January of 2009 and look at the world today, my friend, you and I even haven’t had a chance to talk about the shameful, disgraceful actions of us not giving the Ukrainians weapons to defend themselves. That’s a shameful chapter.

McCain: The President is wonderful at setting up straw men. You know, when Lindsey and I and others have said look, we need to get some boots on the ground in Iraq, such as forward air controllers, some Special Forces, some of that, see, they have got a choice. We either do nothing or send in thousands of troops. You know, he’s very good at setting up straw men. He’s setting up one now. He’s saying we have a choice between this and all-out war. Not true, sir. Excuse me, Mr. President, not true. We could increase the sanctions to the point where we could really put enormous pressure, economic pressure, on the Iranians, and then they would sooner or later come back to the bargaining table and we would get what was originally intended in these negotiations, which is the total abandonment of the course, a path to nuclear weapons rather than what it’s turned, morphed into, which is a delay. You know, in the Middle East, and particularly in that part of the world, they think long term, right? To them, ten years is just a heartbeat. And so the premise of this deal is that after ten years, they would have nuclear weapons. That’s the premise of it. And of course, that isn’t even anywhere near valid.

Hewitt: Now I want to play for you, John McCain, three quick quotes. This is the President on   Iran and the United States:

McCain: (laughing) Like I said, you can’t make it up. And where was this President in 2009 after a corrupt election that thousands and thousands of Iranians were in the streets chanting in English, Obama, Obama, are you with us or are you with them? And his response, and they shot to death a young woman name Neda, bled to death in the square in Iran, I’ll never forget seeing that, but meanwhile, he said he wanted to improve relations between the United States and the, get this, the Islamic Republic of Iran. And so of course he, I mean, only an insane person would compare the United States of America with a country that is governed by the ayatollahs who regularly hang people who, oh, well, a terrorist nation.

Hewitt: Let me play you the second cut. This was the next day. The President’s talking with the NPR reporter about what your role, meaning what Congress’ role ought to be, and he said this.

Hewitt: It seems to me, Senator McCain, he’s not interested in listening to you, and that there is no appropriate role. I don’t even know of a president who gets to define what the rule of Congress is. The role of Congress is spelled out in the Constitution.

McCain: How can you possibly abrogate all of that to the executive branch?

Hewitt: Of course. Last bit of audio from Vice President Cheney on this show two days ago.

Hewitt: Is he naïve, Mr. Vice President? Or does he have a far-reaching vision that only he entertains of a realigned Middle East that somehow it all works out in the end?

Dick Cheney on Tape: I don’t know, Hugh. I vacillate between the various theories I’ve heard. But you know, if you had somebody as president who wanted to take America down, who wanted to fundamentally weaken our position in the world, reduce our capacity to influence events, turn our back on our allies and encourage our adversaries, it would look exactly like what Barack Obama is doing. I think his actions are constituted in my mind those of the worst president we’ve ever had.

Hewitt: We’ve got a minute left, Senator John McCain. What do you make of the Vice President’s assessment?

McCain: I think it’s accurate, but I’d also point out that in my view, what it is, is a president of the United States that does not believe in American leadership. And if you don’t believe that America must lead, then that explains a lot of the actions where the President has just either not been, had us involved, or withdraw completely from places like Iraq and leave them into chaos. If you don’t believe in American exceptionalism, then you don’t, then we’re just like any other country in the world, and we should leave it alone. But the lesson that the President does not understand is without American leadership, vacuums are created and very, very bad things happen. And don’t interpret that to say that Lindsey Graham and I want to send troops everywhere in the world. But it does mean there’s got to be American presence and help in a place like Iran where we could, I mean, excuse me, Ukraine, where we could give them weapons with which to defend themselves. Not a single American boot, and of course, we’ve seen the result of leading from behind throughout the Middle East.