John McCain: Obama Has Demeaned And Cheapened The Office Of The Presidency 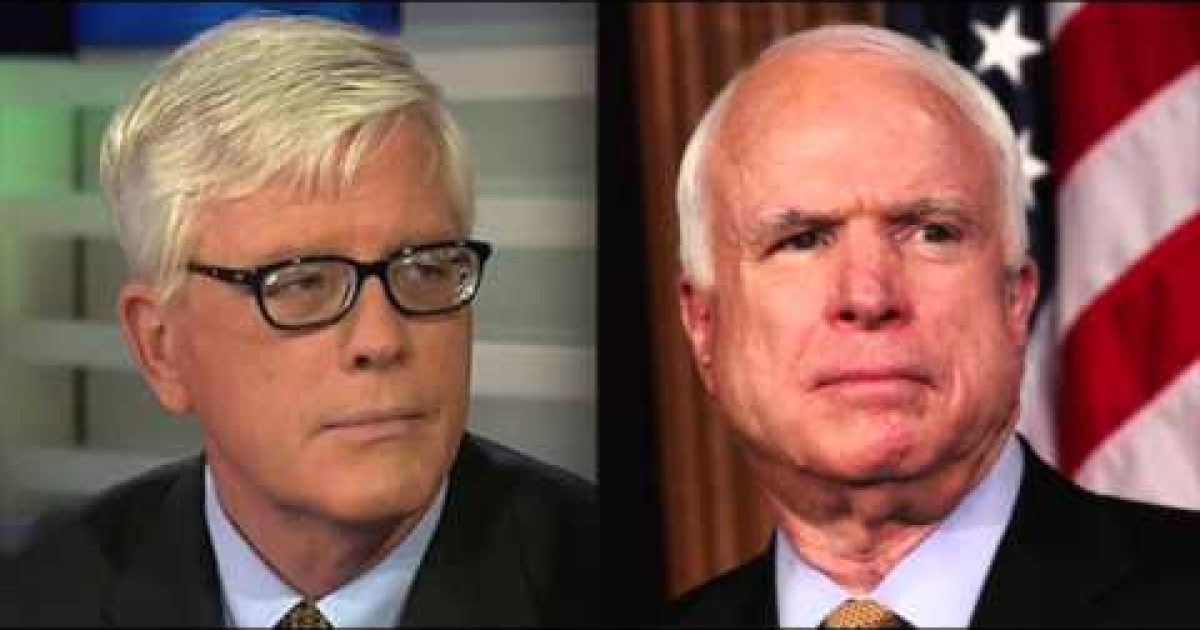 Arizona Senator and cranky old man, John McCain was on the Hugh Hewitt program on Monday evening to discuss the president’s load of crap sandwich also known as the P5+1 deal with Iran. Their discussion began with a review of Obama’s speech at America University, where Obama attacked everyone who disagreed with him. McCain used that as one of the examples where the president ” has demeaned and cheapened the Office of the Presidency.” He better be careful, even though his comment was correct and justified, that’s the kind of comment, the plague he launched upon this country (his daughter Meghan) will criticize.

Hewitt: The first thing I want to ask you about is the president’s comment that those who are opposed to the deal are making common cause with those who shout “Death to America” in Iran.

McCain: I think the president has demeaned and cheapened the Office of the Presidency by that kind of comment on–it seems it is immorally as to attack to those who disagree and characterize their opposition which I believe is the correct political arena is all about. People with different opinions–debating and discussing it before the American people. I think he is obviously paints us people who are likely hard-liners in Tehran who sang “Death to America. Death to Israel.” That’s not presidential. I would ask you Hugh, if you heard any president–either Republican or Democrat–sink to that level?


Hewitt: No, I think it was the low-point in presidential rhetoric, appropriately reflective how desperate he’s become because the details–I mean, Soleimani flew to Moscow. They broke the deal already!

McCain: I know, and by the way, to–I know many of our listeners know this–the Soleimani that flew to Moscow is the same guy who sent the copper tip to IED’s into Iraq with General Dunford and the general is–Joint Chief of Staff–and so killed at least five hundred soldiers and marines–God knows how many were wounded are now have prostheses thanks to Soleimani who, by the way, the Europeans are going to lift any sanctions on and, by the way, the same Soleimani that has been orchestrating the attacks against ISIS with the Shia militia and taking selfies in Baghdad with the Shia extremists so, man, you cannot make this stuff up Hugh.

Hewitt: Yeah General McChrystal sat across from me in my studio and said he’s the most dangerous man in the Middle East. There’s a guy in Yemen as well–Abdullah. But Soleimani has become a cult hero McChrystal said and we are empowering him, Senator!

McCain: And a body–the prime minister (chuckles)– of Iraq is now relying on the Shiite militia who are trained and equipped by Qasem Soleimani and the Iranian Revolutionary Guard and equipped by them because the Iraqi military is completely shattered. The other group–as you know–that are effective are the Kurds, but as far as Baghdad is concerned, the only people they can rely on are the Shia militias so long that General McChrystal, General Petraeus, and others fought against during the surge. The Battle of Sauder City was against–guess who–the Shiite militias. And I tell you, now it’s become so convoluted in Syria, you can’t tell the players who are in our program except to know that America is sending sixty fighters and a bunch of them were captured. . . (laughs). . . I don’t mean to laugh–but were captured, and this is a result of five hundred million dollar expenditure of taxpayer’s dollars. It’s more absurd that it been anything that I have ever seen in my life.