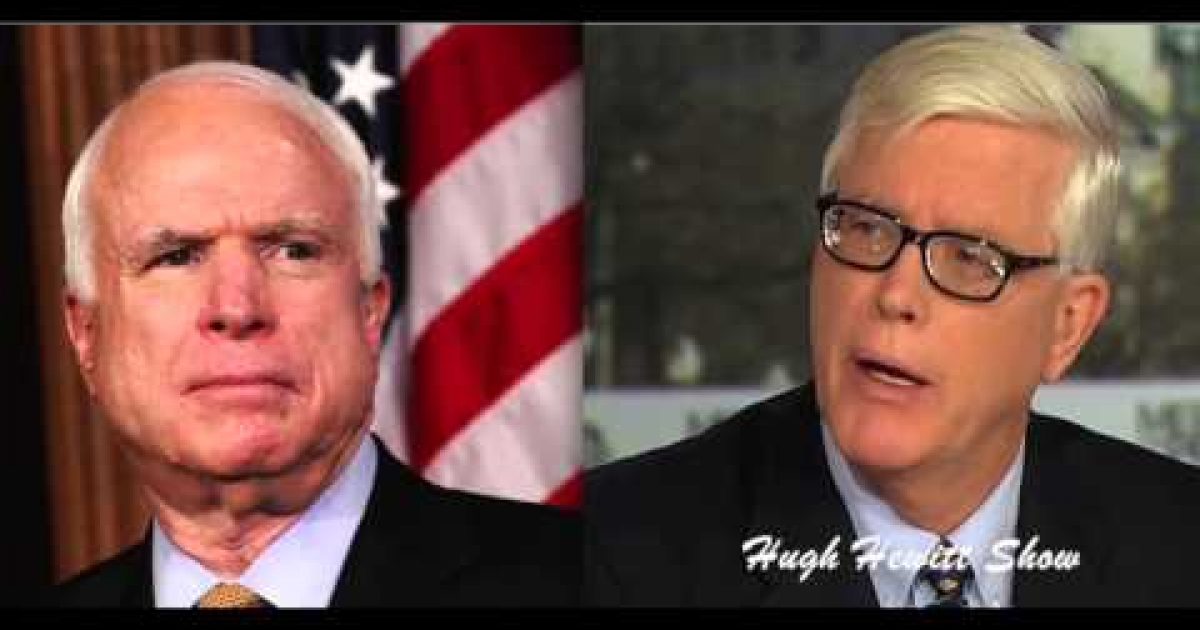 I have to admit my first reaction is who kidnapped the REAL John McCain after all except when talking about foreign policy he generally reserves his criticism for fellow Republicans. After receiving assurances from the staff of the Hugh Hewitt show that the transcript and audio below is from an interview with the real live John McCain it has been deemed worthy to share with you folks.

Appearing on Friday evening’s Hugh Hewitt Show, John McCain took a relatively conservative stance about the nomination of Loretta Lynch to replace Eric Holder as Attorney General of the United States, saying “Loretta Lynch has said that the President’s unconstitutional executive orders are “reasonable.” Then if that is the case, no Republican should vote for her confirmation, because she is going to implement what the President himself said 22 times would be unconstitutional actions.”

Below is a transcript of the entire interview and an audio of his comments about Lynch:

Hewitt: The longest range story is whether or not we’re going to fund the Pentagon. And at the tip of that spear is Senator John McCain from the great state of Arizona. Senator McCain, welcome back to the Hugh Hewitt Show, it’s great to have you on.

McCain: Thank you, Hugh. And can I first of all thank you for your effort on bringing some sense into this situation, because we Republicans, being strong pro-Defense but also deeply concerned about this feckless foreign policy which has put is in grave danger, are now, at least some of them, want to propose less for Defense than the president of the United States. There’s a freedom caucus, and they’re all friends of mine, but as you point out in an articulate fashion, freedom isn’t free.

Hewitt: Well, I noted today that Speaker Boehner seems ready to take on the so-called deficit hawks to save the Defense in the House, and in the colleagues you’ve got, between Senators Graham, Ayotte, Cotton, Sullivan and Ernst, and they’re all veterans, I note, it looks like you’re going to be able to do it in the Senate as well. So next week’s going to be a big week for finally breaking this sequester. Are you an optimist?

McCain: I’m an optimist about it. By the way, thanks to people like you that are, directly impact some of our strong conservatives, and again, I appreciate it, I think it’s going to happen, but it’s not the best way, I’ve got to be very frank with you. What they’re going to do is increase the spending for the Overseas Contingency Operations rather than fix the budget itself. And that’s a one year fix, and we may be fighting this battle again next year rather than fixing these so-called budget caps. I don’t like it, but it, as opposed to the other alternative, which is levels which every uniformed leader who has testified before our committee has said, Hugh, that if we don’t remove these caps, it puts the lives of the men and women serving in uniform in greater danger. We cannot do that. We cannot do that to these young men and women who are putting their lives on the line. And again, I thank you for your appreciation of it.

Hewitt: Now I am curious if we do the Band-Aid this year, is there any reason why the Speaker and the Leader couldn’t bring forward a standalone bill that breaks the cap forever and just see if your colleagues in the Senate on the Democratic side would dare filibuster that. And the President himself has been out there saying the sequester makes no sense for the Pentagon, it is endangering our national security. Can’t we do both, both the short term fix and a long term fix?

McCain: I want them to try it. The question is, is could you get Republicans to vote for it. You see my point, Hugh?

McCain: You’ve got a little more work to do, my friend.

Hewitt: I think Republicans who vote against the spending will find themselves much more in danger of a primary challenger than deficit hawks who are afraid of spending an extra $30 or $40 billion dollars on Defense. I really do. I think the country’s woken up on this thing. Let me ask you about the specifics. Will the appropriations language contain riders directing assistance to Ukraine, do you think, Senator McCain?

McCain: No, but…no, but we need to have that, and again, I want to thank you for that. Do you know that we won’t even give intelligence information to the people of Ukraine while they’re being slaughtered by Vladimir Putin? We’ve got to try to force that as well. It’s a shameful chapter in American history that we are allowing Ukrainians to be slaughtered by Vladimir Putin. And by the way, a small example, if you’re a Ukrainian soldier right now, and you see a drone, it’s a Russian drone, you’ve got 60 seconds to move, because there’s an artillery shell coming within 60 seconds. And we refuse to even, not only not give them defensive weaponry, but we refuse to give them intelligence information. It’s one of the most shameful, it is in the exact tradition of Neville Chamberlain.

Hewitt: Let me, then, going further, Putin is watching, obviously, how craven we are here.

Hewitt: And I’m beginning to wonder about our friends in the Baltic states, and I talked about this briefly with Ben Carson earlier this week. If he makes a move on the NATO states of Estonia or Latvia or Lithuania, Senator McCain, do you think NATO is ready to go toe to toe with him and push it?

McCain: No, and I’d like to mention to you that Lindsey Graham and I have predicted every move that he’s made from taking Crimea to what he’s done in Eastern Ukraine. And next is a town called Mariupol, a city called Mariupol, and so that he has a land bridge to Crimea. The next target after that is Moldova, if he gets away with it, and then the next is the Baltic countries. And the way he would do it, Hugh, is not to invade these countries, but to go and take, carve out a small area of, say, Estonia, which has Russian-speaking people, and there are significant numbers of them, and say he’s just there for the Russian-speaking people. Do you think, then, my friend, that the Italians or the Spaniards would vote to do anything? It requires a unanimous vote of NATO in order to take action. Look, he is getting away with murder. By the way, he sanctioned me again.

Hewitt: I saw that, twice. You can’t go there twice in a row, I guess. It’s, I’m kind of hoping to make that list someday, but I don’t think he cares much about radio talk show hosts. But what is, so when does he stop? In all seriousness…

McCain: The only time he stops is when he pays a price that is heavy enough that the people of Russia rebel against it. Why did the Russians withdraw from Afghanistan? It’s because all of us have seen Charlie Wilson’s War. It’s because we gave enough assistance, training and equipment to Afghans that the price exacted in the terms of casualties of Russians forced them to withdraw. Right now, he has paid no price. And the people that are in, President Obama is bragging about the price of oil. The price of oil was lowered by Saudi Arabia, not by the United States of America. This president does not believe in American exceptionalism. He does not believe that America leads. And if you accept that premise, then of course it makes all of these failures that the President has engaged in as following from that. Hugh, I know your time is short. Could I just mention one other issue with you very quickly that’s coming up?

McCain: That’s Loretta Lynch. Loretta Lynch has said that the President’s unconstitutional executive orders are “reasonable.” Then if that is the case, no Republican should vote for her confirmation, because she is going to implement what the President himself said 22 times would be unconstitutional actions. And by the way, I also believe that Mitch McConnell is right that we should not even bring it up until we get this human trafficking bill disposed of. Children are being mistreated in the worst possible ways while we dither over a provision in the bill which was long ago settled.

Hewitt: And I have the last couple of quick ones for you, Senator McCain.

Hewitt: In the Defense Armed Services Committee, this president wants to mothball carriers. He hasn’t gotten us a replacement for the Ohio Class submarine. The F-35 has been stretched out. Are you going to get down in the weeds and mandate that they start? I mean, this Ohio Class submarine is the backbone of our deterrence against crazy people. Are you going to push them to get serious?

McCain: We will be mandating those weapons systems, and by the way, including prevention of the retirement of the A-10 aircraft, the best close-support aircraft we’ve ever had. And by the way, in case, another one for your menu is that right now, we are using Russian rockets, and we’ll continue to use Russian-made rockets for our space activity. That is unbelievable.

Hewitt: It is. Okay, last question, the Iran deal is aborning. Lee Smith writes today in the Weekly Standard that people have to look seriously at destroying the Iranian nuclear infrastructure if they don’t do it willingly at the table. That involves, of course, very serious decisions of war and peace and airpower. Is there any way that John McCain can be persuaded that a deal with Iran is verifiable and in our interests?

McCain: Not at its present stage, Hugh. As Henry Kissinger said before our committee, the original intent of these negotiations was to prevent Iran from ever acquiring a nuclear weapon. Now, it’s to delay it. And by the way, we are now hearing that thousands of centrifuges are part of the deal, that ten years, they’re free to act wherever they want to. But more importantly that that, in my mind, Hugh, is that Iran is on the move throughout the Middle East. They are committing aggression everywhere, whether it be Hezbollah, in Beirut, they know control Lebanon, Sana’a in Yemen, where the Houthis that the Iranians backed are now taking over at least half of the country. They run things in Damascus. Bashar Assad is a client state. And in Baghdad today, you are watching Soleimani, the head of the Iranian Revolutionary Guard, visibly directing the strikes using Shiia militias, the same people that sent in IED’s with copper tips that killed hundreds of American soldiers and Marines.

McCain: It is not believable, Hugh.