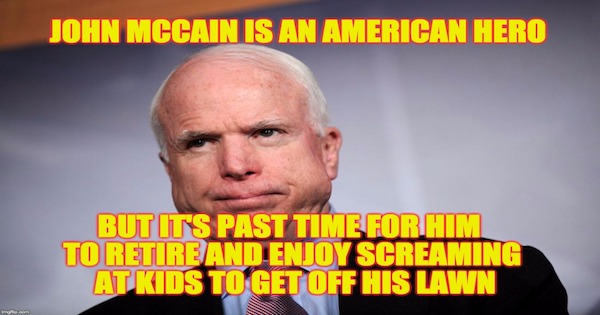 There used to be a tradition that America’s politicians (or wannabes) aren’t supposed to criticize the U.S. or it’s leaders outside the country. The thought being with all our differences we are still one united country.  Barack Obama was criticized for breaking that tradition, especially during the apology tour at the beginning of his first administration. One would expect and “old-school” politician like John McCain to follow that tradition. But McCain is establishment with a capital “E.” That may be why he feels the need to bash president Trump even at a conference in Germany. And that was just one signal during the past week that maybe John McCain days of serving this country should be over.

He recently got punk’d by a pair of Russian pranksters who convinced the Senator that they were actually the Prime Minister of Ukraine. The pranksters asked McCain to explain what President Trump would be doing about Vladimir Putin’s aggressive stance, to which McCain answered, “I have to be very frank with my friend, the prime minister. I do not know what the president is going to do.” If that weren’t bad enough, McCain eventually also promised send powerful military hardware to Ukraine in an effort to help defend themselves against the Russians!

2) McCain Either Breaks Tradition Or Doesn’t Know He’s Out Of The Country:

McCain is currently in Europe for the very important international security conference taking place in Munich, Germany. His speech was rife with condemnation of President Trump and his foreign policy ideas, and full of pleas for his European counterparts to remember that while Trump may be President, the American system has checks and balances on his power. McCain went so far as to articulate that the Europeans could remain confident in America because much of the Trump team is made up of mainstream Republicans who won’t support Trump’s Foreign Policy ideas.

3) John McCain: Master the Hyperbole, But Nothing Else

On Friday, President Trump delivered a speech in Melbourne, Florida to a packed and raucous crowd, and McCain appeared on NBC to compare the President to a dictator.

“I hate the press,” the Arizona Republican sarcastically told NBC News’ Chuck Todd on “Meet the Press.” “I hate you especially. But the fact is we need you. We need a free press. We must have it. It’s vital.”

But he continued, “If you want to preserve — I’m very serious now — if you want to preserve democracy as we know it, you have to have a free and many times adversarial press,” McCain said in the interview. “And without it, I am afraid that we would lose so much of our individual liberties over time. That’s how dictators get started.”…

“They get started by suppressing free press, in other words, a consolidation of power — when you look at history, the first thing that dictators do is shut down the press,” McCain said. “And I’m not saying that President Trump is trying to be a dictator. I’m just saying we need to learn the lessons of history.”

4) Is McCain suffering from dementia? There’s been no suppressing the press since Obama.

Barack Obama is the President who was investigating the Associated Press, sifting through their private phone conversations and digging in to the work they were doing.

Barack Obama is the President who SPIED on a reporter, collected his phone records, tracked his movements, and seized his private emails. Heck he spied on the reporter’s parents.

Trump attacking the press for being biased, unfair, and at times just wrong, is not “suppressing” the press. It’s demanding that the press do their job properly. Report the news, stop inserting your own agendas, and stop trying to make every news story one in which you advocate for your personal worldview. Trump is right to hold the media accountable, and McCain is wrong for attacking the President without reason.