John McCain Going Out The Way He Lived: As An A-Hole! 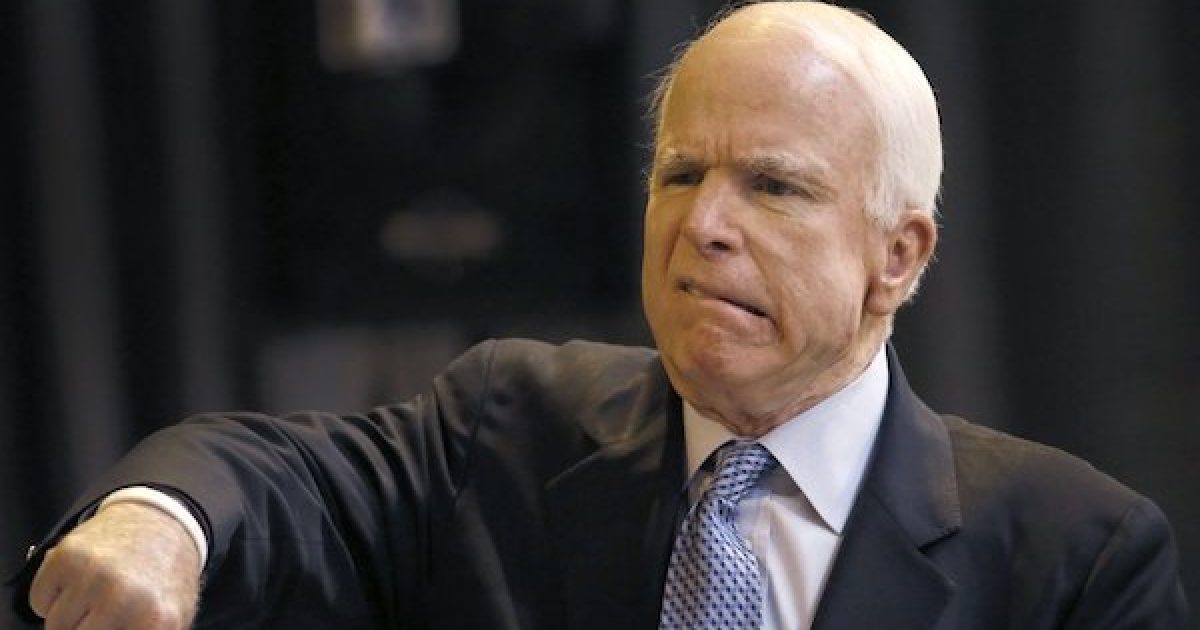 Let me begin by saying I pray that John McCain has a miraculous recovery and returns to full health.  But seems as if the eighty-one-year-old senator is nearing the end. Last weekend he asked his son-in-law Ben Domenech to take care of his daughter Meghan and there has been a string of people such as Joe Biden and Joe Lieberman to say goodbye.

While most people near death tend to make their apologies, or a the very least become “nice,” still the curmudgeon as he nears the end John McCain is exhibiting the same nastiness toward fellow Republicans that made him so unpopular with the GOP the last two decades of his life.

Former Presidents George W. Bush and Barack Obama have been asked to deliver eulogies at McCain’s funeral, people close to both former presidents and a source close to the senator confirmed to CNN. McCain unsuccessfully challenged Bush for the GOP presidential nomination in 2000 and Obama in the 2008 general election. But according to sources close to McCain, he doesn’t want President Trump at his funeral. V.P. Pence can come but not Trump. See what I mean, an a-hole to the very end.

Then there’s the selection of Sarah Palin as his V.P. candidate. Whether one likes Ms. Palin or not, joining John McCain put a target on her back, invited lawsuits and ridicule from almost every liberal alive and in end ruined her political career.

Despite the fact she sacrificed her career and worked her butt off to get him elected President, McCain stabbed her in the back on his deathbed. He lamented that he shouldn’t have picked her as his V.P.

In his soon to be released book and HBO Special called “The Restless Wave,” (which would have been more appropriately titled “Still an A-hole”)

While he continues to defend Ms. Palin’s performance, Mr. McCain uses the documentary and the book to unburden himself about not selecting Mr. Lieberman, a Democrat-turned-independent, as his running mate.

He recalls that his advisers warned him that picking a vice-presidential candidate who caucused with Democrats and supported abortion rights would divide Republicans and doom his chances.

“It was sound advice that I could reason for myself,” he writes. “But my gut told me to ignore it and I wish I had.”

Even more striking is how Mr. McCain expresses his sorrow in the documentary. He calls the decision not to pick Mr. Lieberman “another mistake that I made”

Nice going John, you screwed up Palin’s career and on your death bed, you bemoan the fact you didn’t pick someone else.

Ignoring the fact that he was FBI’s source for the Trump dossier, John McCain trashes President Trump in his tome professing

“He seems uninterested in the moral character of world leaders and their regimes,” he writes of the president. “The appearance of toughness or a reality show facsimile of toughness seems to matter more than any of our values. Flattery secures his friendship, criticism his enmity.”

And he embarrasses Trump by saying he doesn’t want the President at his funeral. Truth be told he should be apologizing to the President he was the one who first gave the fake dossier to the FBI where it could be used to begin the anti-Trump Russian witch hunt.

Already known (and admitted by McCain) is the fact that the intelligence community first learned of the document after Senator John McCain  turned it over to the FBI:

One would think that the Republican Senator from Arizona and former GOP presidential candidate would extend the courtesy to Trump to let him know about the documents that supposedly were about to be used by the Russians to blackmail the next president. But not McCain.
The Arizona Senator’s critical illness does raise the question for political analysts when there is a special election to fill John McCain’s seat as senior senator from Arizona, will it flip and become a Republican seat?
And now that he will soon meet his maker, McCain is making sure that America will remember him as he lived, as an a-hole
Facebook Twitter Flipboard