John Lewis & 37 Other Democratic Congressman ‘Flip The Bird’ To America 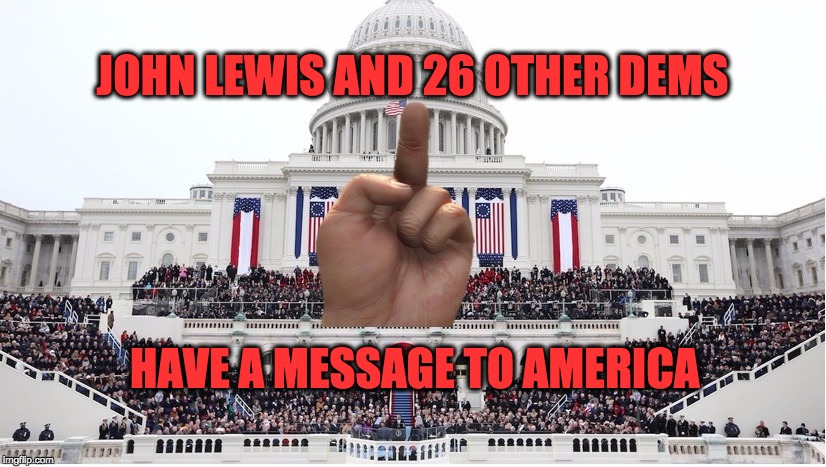 We must learn to live together as brothers or perish together as fools. Rev. Dr. Martin Luther King, Jr, June 1965,

1/17 UPDATE: The number of Dems skipping the inauguration and flipping the bird to the American people has grow to 38

As of this morning, 38 members of the House of Representatives have decided against living together as brothers. These house members have announced that they will not be attending Friday’s Inauguration of Donald Trump as the 45th president of the United States (see list below).

The cabal is led by Representative John Lewis, who used to be a national civil rights hero but sadly has become little more of a political hack.

On Meet The Press, Sunday he was asked whether he would forge a relationship with President-elect Trump, Lewis said, “It’s going to be very difficult. I don’t see this president-elect as a legitimate president.” He continued, “I think the Russians participated in helping this man get elected, and they helped destroy the candidacy of Hillary Clinton.” Lewis called it a “conspiracy” and added: “That’s not right. That’s not fair. That’s not the open democratic process.”

Lewis added that for the first time in his 30 year congressional career he would not be going to the inauguration. But as the video atop this post…that is a lie, he skipped the first Bush#43 inauguration because he felt Dubya wasn’t legitimate either.

First of all Hillary Clinton did not lose because of the Russians. She lost because she was a flawed candidate, who was greatly damaged by the email scandal, Benghazi, and using her State Department office as a way to enrich the Clinton Foundations and her own pockets. All of which was known BEFORE Wikileaks began to publish the Jon Podesta emails. Another reason she lost was her campaign was so arrogant, they didn’t think Ms. Clinton needed to spend time in the traditionally Democratic-leaning rust belt.  Many of these ignored states went to Donal Trump. Top all that with the fact that Hillary had no message, and is a lousy campaigner, everything was set up for a Trump win.

Even with all that, Hillary’s fortunes didn’t begin to change until Remember, the Department of Health and Human Services announced that Obamacare costs were going up double digits on average in 2017, a few weeks before the election. Trump seized upon that issue and that’s when polls began to change. Are the Democrats contending that the Russians hacked into the HHS computers? Perhaps they believe that Putin cased Obamacare to fail.

Face it, this Democratic Party boycott has nothing to do with the Russians, this is all about not liking Trump or his politics, this is about not being able to accept the fact that Hillary Clinton lost.  This is also about damaging the nascent Trump administration making it more difficult to get his programs through.  The truth is that if  a Republican had said this about a President-elect Hillary Clinton, Democrats would be going nuts.

Remember before the election, when the Democrats were convinced that Hillary would win and there was the controversy about whether or not Donald Trump would accept the results? The Democrats went wild, correctly saying the peaceful transfer of power was one of the traditions making the United States that shining city on the hill. But because their person lost, all that is thrown out the window.

Instead the Democrats are screaming about Donald Trump fighting back and sending nasty tweets about Lewis. Yes Lewis was a great civil right’s leader, but he isn’t a god.  Human’s make mistakes and the fact that Rep. Lewis put party politics of the country was a huge mistake.

Lewis and his gang of unpatriotic members of the house don’t understand, this is not about Donald Trump, it’s about the Presidency, and the peaceful transfer of power from one party to another. This is something that’s been done ever since John Adams transferred the keys to the government to Thomas Jefferson in the 1800 election (which like the 2016 election was famous for its conscientiousness).

The only Democrat who has an excuse is Jerold Nadler, after he voted for the Iran deal he convinced many that he has neither a conscience or a soul.

As for the other 37 members of Congress, they are spitting on 289 years of American tradition, and they’re ‘flipping the bird’ to all the Americans who voted back in November, because they are not only saying that Trump is illegitimate but hey are saying that all the votes were illegitimate. Even the Hillary voters…these Democrats are calling them morons who were easily influenced by Vladimir Putin falsehoods.

The worst part is that by boycotting and casting down on the legitimacy of the Trump Presidency, these Democrats are giving Putin exactly what he wants, to disrupt the American system and show the world that this republic and this peaceful transfer of power…just doesn’t work.