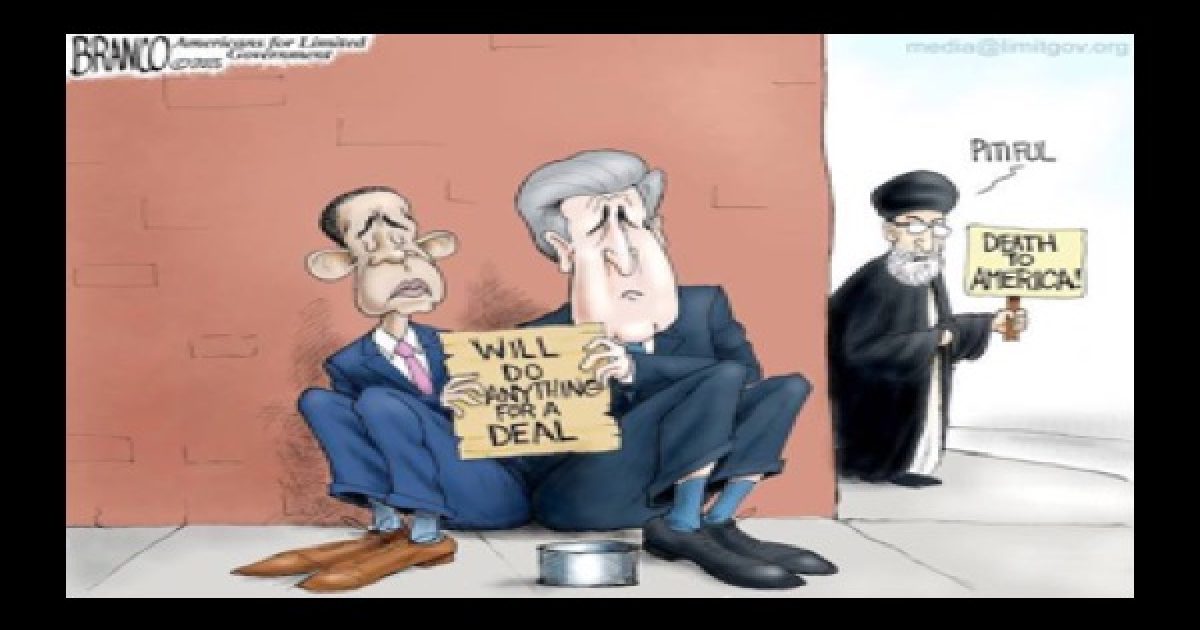 John Kerry has been working behind the scenes to save the fraudulent Iran nuclear deal the Obama administration sold to the American people with lies and cover-ups.  According to the Boston Globe two Sundays ago he went to the UN for a meeting with Iranian Foreign Minister Javad Zarif to discuss ways to save the deal Iran had broken from the very first day. “It was the second time in about two months that the two had met to strategize over salvaging a deal they spent years negotiating during the Obama administration, according to a person briefed on the meetings”

President Trump who has been critical of the Obama/Kerry capitulation has until May 12th to decide whether or not to toss the JCPOA into the scrap heap, because of its unfavorable terms, lack of inspections, and its sunset provisions that will allow Iran to build a bomb in another seven years (if they wait that long)  along with Iran’s violations of the deal.

Kerry also met last month with German President Frank-Walter Steinmeier, and he’s been on the phone with top European Union official Federica Mogherini, according to the source, who spoke on the condition of anonymity to reveal the private meetings. Kerry has also met with French President Emmanuel Macron in both Paris and New York, conversing over the details of sanctions and regional nuclear threats in both French and English.

(…)“It is unusual for a former secretary of state to engage in foreign policy like this, as an actual diplomat and quasi-negotiator,” said Michael O’Hanlon, a foreign policy expert at the Brookings Institution. “Of course, former secretaries of state often remain quite engaged with foreign leaders, as they should, but it’s rarely so issue-specific, especially when they have just left office.”

John Kerry has no right to be free-lancing, as he should know we have one person leading foreign policy and that’s the President. Kerry’s effort is meant to stymie rather than advance President Trump’s foreign policy

Additionally, Kerry has quietly tried to bolster support in Congress. In recent weeks he’s placed dozens of phone calls and, often with Ernest Moniz, the former US energy secretary by his side lobbying members of Congress, including House Speaker Paul Ryan.

Kerry and Moniz met in February with Ryan, who has been outspoken in his opposition to the Iran deal. Kerry also held a breakfast briefing last week with members of the House and Senate, which was designed to answer questions as well as underscore how, if Trump pulls out, Europe could hold the deal together.

As Secretary of State he capitulated to the will of the Iranian Mullahs and now as a private citizen, he is still operating in the interests of Iran against the American people, this time he is also working against the President of the United States.

Earlier this week using information secretly gathered from Iran and verified by the United States, Israeli Prime Minister Binyamin Netanyahu exposed a major lie in the information the Iranians supplied to the International Atomic Energy Agency (IAEA).  That data was a required to be turned over before the JCPOA could be implemented. In other words, the entire agreement was based on a lie and should never have been implemented.

Kerry responded to Netanyahu’s announcement by saying there was no new information in his presentation, which would mean that the former secretary of state was complacent in Iran’s violation. However, Kerry’s proclamation was just one more JCPOA lie. Two prominent former IAEA inspectors say that the revelations presented by the Israeli Prime Minister did contain new information.

Olli Heinonen, the former deputy director general of the International Atomic Energy Agency (IAEA), said “There were some pictures that were quite familiar to me. But at the same time, there was also new information.” Specifically, Heinonen mentioned evidence regarding Iranian hardware previous unknown to authorities.

This new information has serious consequences, he implied. “They must have manufactured pieces of equipment in Iran,” Heinonen said. “Where are those pieces? Who is keeping them?”

Kerry has pointed to an April 25 letter signed by 26 former top-ranking Israeli military and security officials urging the United States to stay in the agreement. My sources tell me that there are indeed former Israeli officers and security officials that want to stay in the deal. What Kerry doesn’t mention those former military and security people are now very politically active in parties that oppose the Prime Minister. They added that the present heads of the military and other security agencies agree with Netanyahu’s opposition to the JCPOA and they are the ones with the most current information.

I am no lawyer, but Kerry’s actions with foreign leaders appear to violate the Logan Act, an 18th-century law meant to crack down on private citizens acting on behalf of the United States during a dispute with foreign governments.

Since no one has ever been charged with violating the Logan Act, it is doubtful that Kerry will be either.