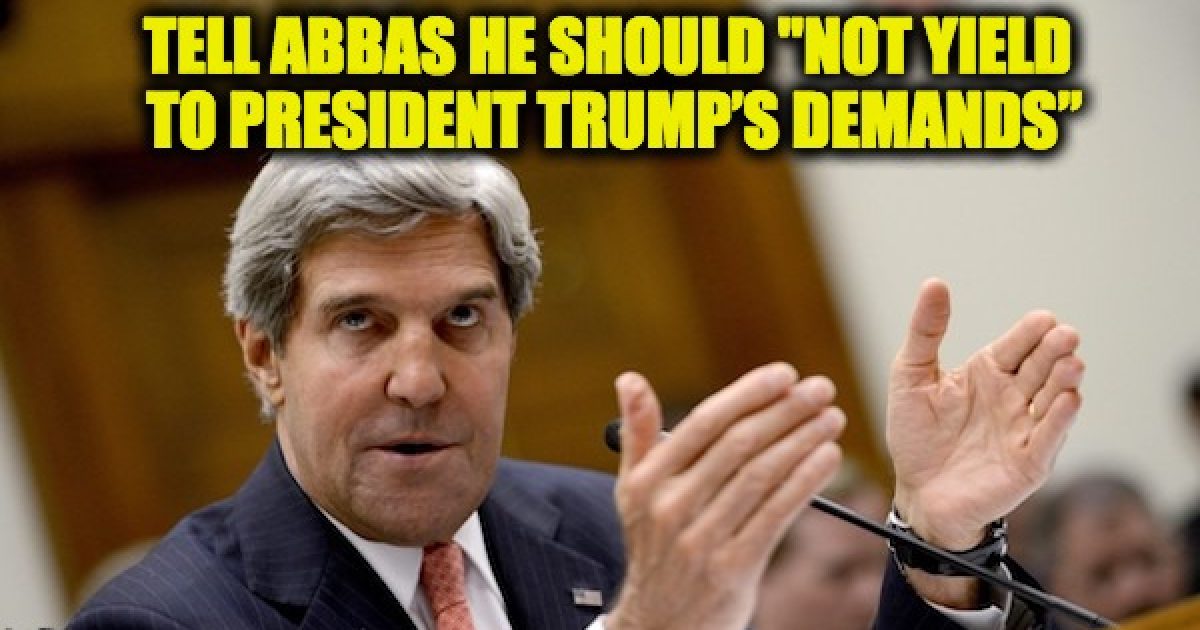 Now that he’s out of office Obama’s Secretary of State John Kerry is continuing his anti-Israel endeavors, while possibly violating the Logan Act at the same time. Israeli Newspaper Ma’ariv reports that former secretary of state, John Kerry has sent a message to Palestinian Authority Pres, Abbas, “that he should stay strong in his spirit and play for time, that he will not break and will not yield to President Trump’s demands,” because Trump will be out of office within the year.

Ma’ariv has learned that former US Secretary of State John Kerry met in London a close associate of Abbas, Hussein Agha , for a long and open conversation that contained many headlines. Agha apparently reported details of senior PA officials in Ramallah. A senior Palestinian official confirmed to Ma’ariv this week that there had indeed been such a meeting.

Agha is one of Abbas’s closest associates and a veteran of peace negotiations with Israel. “He conducted the “London Track,” secret negotiations held from 2010 to 2013 between the emissaries of Netanyahu, attorney Yitzhak Molcho, and Brigadier General Mike Herzog, under the supervision and presence of Dennis Ross. Agha also authored with Yossi Beilin the Beilin-Abbas agreement in the 1990s.” Mr. Agha is a staunch supporter of the peace process, and very close to Abbas.

Per the  report, John Kerry asked Agha to convey a message to Abbas  “ask him to ‘hold on and be strong.’Tell him, he told Agha, ‘that he stays strong in his spirit and play for time, that he will not break and will not yield to President Trump’s demands.’ According to Kerry, Trump will not remain in office for a long time. It is a good chance that within a year he will not be in the White House.”

Kerry offered his help to the Palestinians in an effort to advance the peace process and recommended that Abbas present his own peace plan. “Maybe it is time for the Palestinians to define their peace principles and present a positive plan,” Kerry suggested. He promised to use all his contacts and all his abilities to get support for such a plan. He asked Abbas, through Agha, not to attack the US or the Trump administration, but to concentrate on personal attacks on Trump himself, whom Kerry says is solely and directly responsible for the situation.

Ma’ariv also described the President using derogatory terms and offered to help create an alternative peace initiative without the Americans and help it gain international support from the Europeans, Arabs, and others in the international community.

Kerry hinted that many in the American establishment, as well as in American intelligence, are dissatisfied with Trump’s performance and the way he leads America. He surprised his interlocutor by saying he was seriously considering running for president in 2020. When asked about his advanced age, he said he was not much older than Trump and would have no age problem (…)  even in the Republican Party do not know what to do with Trump and very dissatisfied with him and need patience and breathing time to get through this difficult period.

I am not a lawyer, nor do I play one on TV, but Kerry’s actions sound  like a violation of the Logan Act:

The Logan Act (1 Stat. 613, 18 U.S.C. § 953, enacted January 30, 1799) is a United States federal law that criminalizes negotiation by unauthorized persons with foreign governments having a dispute with the United States

Perhaps it’s time for a criminal investigation of John Kerry.