John Kerry: A Narcissist Who Doesn’t Care About Dead Ukrainians 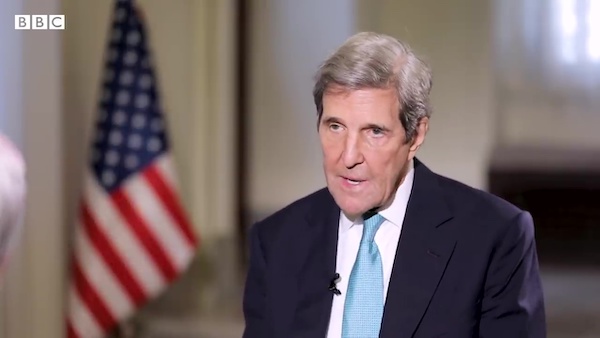 People in Ukraine are getting killed and injured, their homes are being destroyed. Their country has been invaded by a large country with a colossal army armed with advanced weapons and technology. Most Americans see the carnage and feel sick to their stomachs. However, one American who is part of the Biden administration doesn’t seem to have feelings for the Ukrainian people— former Senator, Presidential candidate, and Secretary of State, John Kerry.

We did not know until that moment it was her actual building that had been hit.

Anyone with a heart felt sick after watching one of the many videos such as the one above. John Kerry doesn’t have a heart. His concern was not the carnage Putin was inflicting on the people of Ukraine. He was worried about what the conflict will do to the climate. That is his job in the administration and is important to the key left-wing of his party.

In an interview with BBC Arabic, he gave one line about the people and then dove into climate change:

‘I am very concerned about Ukraine because of the people of Ukraine and the principles that are at risk in terms of international law and trying to change boundaries of international law by force. I thought we lived in a world that said no to that kind of activity, and I hope diplomacy will win.

‘So, you know, I think hopefully President Putin would realize that in the northern part of his country, they used to live on 66 percent of the nation that was over frozen land’.

‘Now it’s thawing, and his infrastructure is at risk,’ he added. ‘And the people of Russia are at risk. And so I hope President Putin will help us to stay on track with respect to what we need to do for the climate.’

What a sick, heartless narcissist whose primary life strategy is to forget worrying about the right thing to do so he can suck up to the Democratic Party.

This man worked with America’s enemies to shoot down President Trump’s foreign policies because they disagreed with the Democratic Party.

He is famous for saying that he threw away as many as nine of his combat medals to protest the war in Vietnam. It made him look good to the Democrats. The problem wasn’t that he tossed the medals or protested the war but that he used it as a political tool to help him get more votes,   Well that, and the fact that it wasn’t exactly true. When his actions were discovered, he owned up to the truth,  “I threw my ribbons. I didn’t have my medals. It is very simple.”

When he was Secretary of State, and Israel was fighting Hamas terrorists, Kerry would ignore the dead Jews but slam Israel every time a Palestinian attacking Israel was killed. When Hamas was shooting rockets from schools and homes, Kerry would denounce Israel for fighting back. Another example of Kerry sucking up to the far left of his party that’s ant-Israel.

Kerry isn’t a man who believes in doing or writing the right thing. It’s all about him and his desire to make himself popular within his party. This is a man who ran for President. Thank God he lost. He is a narcissistic political animal who has no heart.

*NEW* BREAKING: Inmate Who Robbed Gang of 176 Kilos Of Cocaine Had Loaded Gun Inside His NYC Prison Cell- How Did It Get There?
America's Freedom Fighters