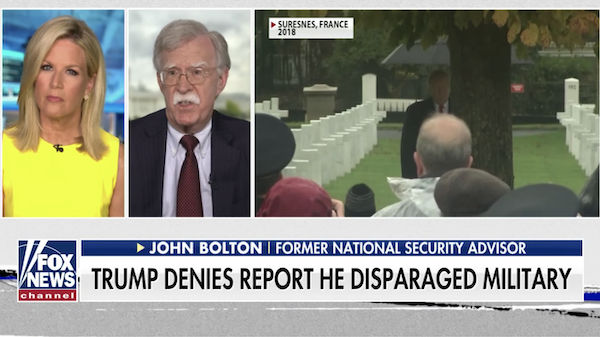 “According to what that article said, the president made disparaging remarks about soldiers and people buried in the cemetery in connection with the decision for him not to go to the ceremony that was planned that afternoon, and that was simply false,”

“I don’t know who told the author that, but that was false.”

“The main issue was whether or not weather conditions permitted the president to go out to the cemetery,”

Bolton said it was the President’s Chief of Staff at the time, General Kelly, who recommended Trump not to go to the cemetery that day. And he described the cancellation of the President’s trip from Paris to the World War I ceremony at Aisne-Marne as a “very straight weather call.”

Bolton goes on to say, “I can’t prove the negative that he never said those things. The President has a habit of disparaging people. He ends up denigrating almost everybody that he comes in contact with whose last name is not Trump.”

Ambassador Bolton was President Trump’s national security advisor for seventeen months, beginning in April 2018. After he was fired in September 2019, he took revenge by writing a scathing tell-all book about his time in the administration.  After the book was published the President said that the book contained classified information and Bolton should be thrown in jail. So it’s clear that Bolton did not defend the President from the Atlantic article because the two are close, or even like each other.

A video of Bolton talking to Martha MacCallum about the Atlantic hit piece follows: