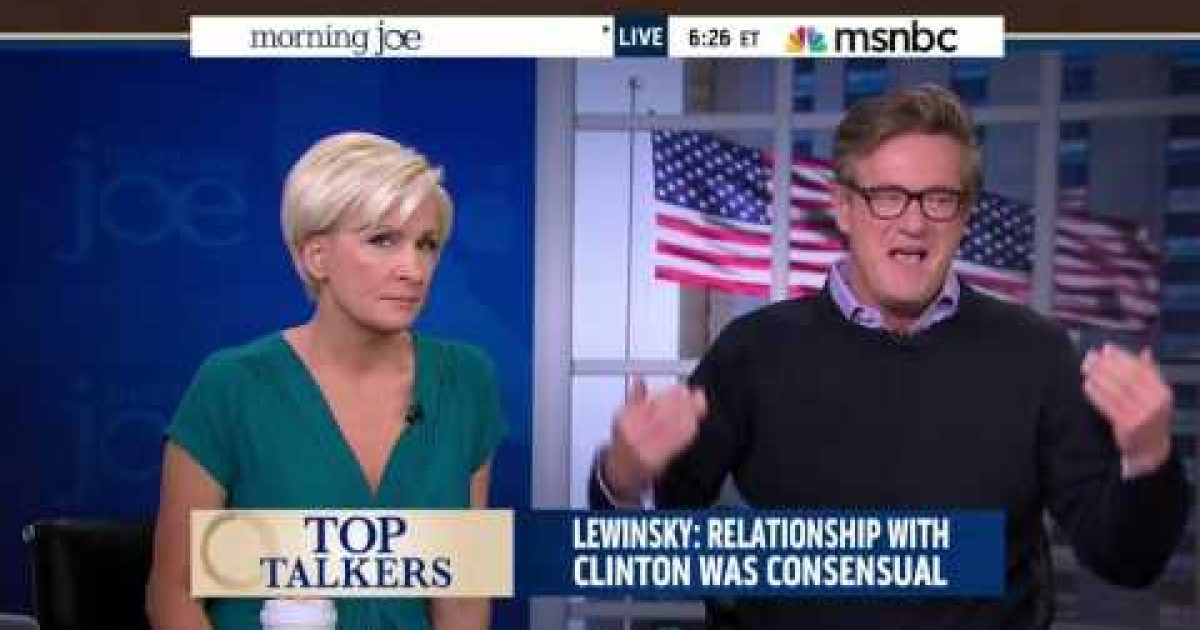 Facebook Twitter Flipboard
Wednesday’s Morning Joe program began with a discussion of the negative reaction by female columnists to Monica Lewinsky’s article in Vanity Fair. Those columns led host Joe Scarborough to launch into a 6+ plus minute rant against those columnists who, just like in the 1990s, attack Lewinsky and give Bill Clinton a free pass.

Scarborough began speaking softly wondering how the female columnists attacking Lewinsky would act if their daughters were preyed upon by the most powerful man in the world who was thirty years their senior. He eventually turned to what he deemed the free pass President Clinton was given then, and is getting one again.

…The guy who acted horrifically. The guy to not only Monica Lewinsky and a lot of other people. He got a free pass. And his approval ratings went up in the ’60s. I learned when that train was coming just step back and let it pass. Because there was nothing else that was going to be said. He always got free passes. He is still getting free passes. Again for anybody who has a daughter that has anything to do with these attacks on Monica Lewinsky, ask yourself what you would do if your daughter who lived in shame and was a punch line for 18 years. And after 18 years actually spoke for the first time while the man who did what he did to a young woman was the rock stars of all rock stars. And by the way all these years later, this is not about Bill Clinton. We all believe in forgiveness. Okay. He’s been forgiven. This by the American people, but this — this should be about the women who are piling on Monica Lewinsky this morning. If it were your daughter, what would you do? If it were or daughter, what would you do? It’s a disgrace then. It’s a disgrace now. And I can’t believe I had to go back to the 1990s and talk about this. Because I swore I would never talk about it again.

Raising his voice, he wondered why is it the woman who is always attacked?

You know what, this happened in the 1990s. Forget about her. Forget about her. Talk about Juanita Broderick. Talk about all these other women, again, I believe in forgiveness, et cetera, et cetera. Why is it that even in 2014 it is the women who are turned into the bad guys? I never got it. I still don’t get it. And all these years later, there are females going out protecting Bill Clinton from his horrific act. Again, I wouldn’t bring it up, as you joke around a whole lot, Bill Clinton and I have made up. We’re friendly. We’re even nice to each other.

Now screaming at times, Scarborough ranted about the feminists who attacked Monica Lewinsky years ago, and have now attacked her again, despite the dignified way she is telling her story:

This is not about Bill Clinton. This is about the women who are eviscerating Monica Lewinsky, who Willie as you said for 18 years was quiet. By the way, lived a life of shame and her entire existence, her entire existence reduced to a punch line. And she stays quiet shows a lot of dignity. A lot more dignity than people who preyed upon her who tried to turn her into a slut or a nut? A 22-year-old daughter, really? Now, they’re coming out and kicking her in the face. Please, you all are sick. And you were sick in the ’90s. You women’s rights slaves, you were sick in the ’90s. You all went around, you defended the wrong person. Time and time again, whether it was Juanita Broderick, whether it was Monica Lewinsky you defended him.​​ And you are doing it 18 years later. You’re pathetic. And if you have young daughters, you should be ashamed of yourself. That’s all I am going to say, I swear to God I will not talk about this for another 20 years. Go ahead, Willie. I’m so angry right now, I’m shaking. I still can’t believe the way he was treated in the 1990s. And it was always the women. The victims. And these people come out, and have the nerve to come out after defending him, after defending him, and claim to come out wanting to support women and protect women. Women’s rights? Unless we protecting a really, really powerful man on our side politically.