Joe Manchin Is Saving Democrats, Yet They Hate Him For It 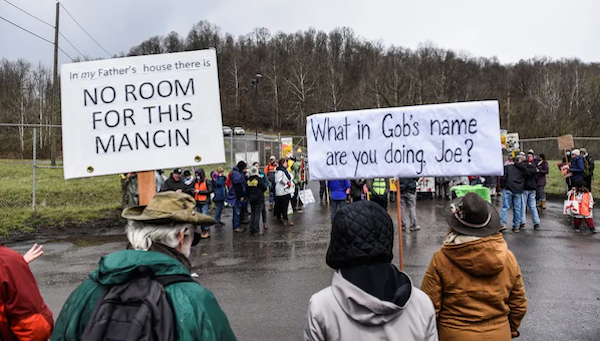 Before the big COVID-19 news broke Thursday, much of the past week surrounded coverage of delusional leftists slandering Sen. Joe Manchin. Again.

And when the horrendous inflation numbers came out a day later, Manchin said no to President Joe Biden’s latest tax-and-spend boondoggle. That no other Senate Democrat could say, the same shows you how insular the party is.

The backlash to Manchin’s common sense was risible.

CNN decided to republish a silly article on Manchin’s “long ties to the coal industry.”

The two-time presidential failure, which represents a sparsely-populated deep blue state of little significance, predictably added Manchin is owned by fossil fuel billionaires or something.

Podesta and the Vermont socialist are incorrect.

Manchin properly represents his constituents in a state where Donald Trump defeated Joe Biden by 39 points; he’s also preserving the party and country when no other Democrat tries.

Seemingly apathetic to soaring inflation crushing hardworking Americans, Democrats kept pushing massive spending. Manchin and Republicans have been proven correct to oppose it, while the Sanders wing is wrong.

And yes, the lifelong West Virginian supports the fossil fuel industry because he represents an energy-producing state, and his voters, like most Americans, want cheaper fossil fuels.

He’s also served the Mountain State for decades in various leadership capacities. He knows he holds a valuable seat that will be in Republican hands for generations once he retires, perhaps in 2024 at age 77.

Sanders does not care about Biden’s agenda; he’s irked because Manchin is undermining his totalitarian goals.

Recent progressive gripes have been about Biden not pushing their unpopular radical agenda — on abortion, guns, and the environment — fast enough. Now, these tyrants want Biden to again circumvent Congress and declare a bizarre emergency about typical July weather.

Instead of taking action to ease the pain at the pump, @POTUS doubled down today on his extreme climate agenda. This will only push energy prices higher. American families are being crushed by his historic inflation & high energy prices. https://t.co/wADmAyuxeT

Democrats face a fall comeuppance, not because of Biden’s advanced age. Still, because they pushed the president to catastrophically pull out of Afghanistan, unnecessary waste trillions, wrongly accuse Republicans of representing “Jim Crow 2.0” for innocuous electoral reforms, and more.

Manchin is much more popular than Biden or Nancy Pelosi precisely because he’s bucking the Democrats’ agenda. Support for Biden decreases whenever he surrenders to the agenda of an unhinged base that speaks only for urbane Americans.

It is remarkable that after 18 months, Democrats have not realized their agenda has been overtaken by real-world events. Sanders and the repugnant elites may not care, but with inflation raging, crime soaring, and the national debt over $30 trillion, socialist aspirations must be quelled.

Lastly, Democrats continue to forget they have a 50-50 U.S. Senate tie, with several members representing red or purple states. They control nothing.

Maybe they’d be better off having eight weeks of election conspiracies not blown two Georgia Senate runoffs on Jan. 5, and Mitch McConnell thus could have stopped some of their shenanigans. Still, regardless, no one asked for their performative balderdash and gave them this power.

s’
s
A.J. Kaufman is a columnist for Alpha News and here at The Lid
j