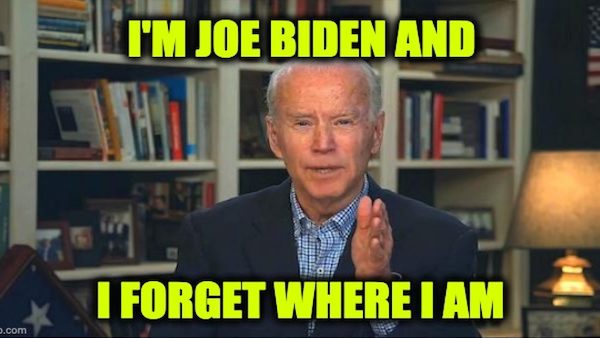 If Trump made half the errors that Joe did in a single day, the media cries for the 25th Amendment would be deafening. Along with the socialist leanings of the Democrats who seem to control his policies,  Columbus Day was a particularly frightening day for those who see Joe Biden’s dementia as another reason he should never be elected President.

The President called Dementia Joe out on it:

Sleepy Joe Biden had a particularly bad day today. He couldn’t remember the name of Mitt Romney, said again he was running for the U.S. Senate, and forgot what State he was in. If I did any of this, it would be disqualifying. With him, he’s just Sleepy Joe!

Which is a good way to get people talking about it… because Trump’s Twitter feed is big enough that it is tough to ignore.

Why does it matter that he gets a few of these things wrong? Well, for one thing, it’s more than ‘a few’.

Here’s a little something from Wiki to think about as we look at his ‘flubs.’

Orientation
Mental Orientation is a function of the mind involving awareness of three dimensions: time, place and person. Problems with orientation lead to disorientation, and can be due to various conditions, from delirium to intoxication. Typically, disorientation is first in time, then in place and finally in person.

One of the chief concerns we have with Joe is the possibility of his judgment deteriorating. With all the darts Democrats have tried to throw at Trump over this very issue, even looking for a way to apply the 25th Amendment at various points in his Presidency (he took a mental acuity test to shut them up) this is an entirely fair question to level at his opponent.

And many believe that nasty Nancy Pelosi’s recent 25th Amendment ploy has more to do with Biden than Trump. They believe that if (God forbid) Biden wins, Pelosi will raise the issue of Biden’s dementia to say he was unfit for office, throw him out, and make Kommie Kamala president. Thankfully that hypothetical (a Biden win) won’t happen.

Here Dementia Joe getting location wrong. (Or maybe it’s a staffer, who knows?)

Biden's Twitter account is confused about where he is. ? He was in Erie, Pennsylvania on the weekend. Today he has two stops in Ohio, one in Toledo and another in Cincinnati. pic.twitter.com/UWxviWNJSQ

But maybe that’s nothing, right?

What about that one you know..?

“I got in trouble when we were running against that senator who was a Mormon, the governor” pic.twitter.com/h2oE4IBw4G

Yes, WE know exactly which miserable back-stabbing RINO you have in mind, Joe. But do YOU still know that you mean Mittens?

But forgetting what office you’re running for? He was a vice-president for 8 years. How long has it been since the last time he ran for Senate? It’s gotta be what, closing in on 20 years by now?

Do mind if we ask you a question, Joe?

What decade is it?

▶️Forgot which state he was in. (Tweeted that he was in Pennsylvania when he was actually in Ohio)

▶️Forgot Mitt Romney's name and instead referred to him as "a Mormon."

Getting the details wrong:

But it was Robert Byrd's office he used – Kennedy was ousted as whip a nearly two years before Biden was elected pic.twitter.com/sNwLb6oDkb

Let’s help him out. Ted Kennedy drove off the bridge and left a woman for dead, and offered to cooperate with the Russians to keep Reagan from being reelected.

Robert Byrd was the Democrat so beloved by everyone that his funeral was a whos-who of the Democrat party, and whose name is on pretty much every government building in West Virginia. He is also credited for forming a chapter of the KKK in West Virginia (held the rank of ‘Exalted Cyclops’–gee those racists give each other weird names).

Biden used to tell this story correctly (like in his book and when he was eulogizing Byrd at his funeral) pic.twitter.com/r7QZ6fYFnL

Does this count as evidence of deterioration?

Biden event in Cincinnati is off to a hot start…. pic.twitter.com/QHgqpesZdY

Maybe people don’t show up because they don’t think he has the mental capabilities to be President.

Biden has always been a gaffe meister. But generally, his gaffes involved saying something stupid at the wrong time, such as when Obama was about to sign Obamacare. Joe leaned over to the President and said, “This is a big t*cking deal’” Or during the swine flu outbreak in 2009 when he told America not to fly, warning, “When one person sneezes, it goes everywhere through the aircraft. That’s me.” Or during a 2008 campaign appearance when he addressed a Texas state senator who is confined to a wheelchair, “I’m told Chuck Graham, state senator, is here. Stand up, Chuck, let ’em see you.” Obviously, Graham couldn’t stand up.

The former VP’s 2019/20 gaffes are different. It’s not that he is saying stupid things at the wrong time—that’s fun. His campaign gaffes are scary. He is forgetting and mixing up easy things, like the Pledge, or when North Korea had nukes. And when those mental slip-ups are combined with the fact that he seems angrier than he was during earlier campaigns, it is clear he is suffering from the early stages of Alzheimer’s or some other form of Dementia.

Beyond disagreeing with Biden on most issues, the fact that he is losing his cognitive ability makes the thought of him in the White House is extremely frightening.