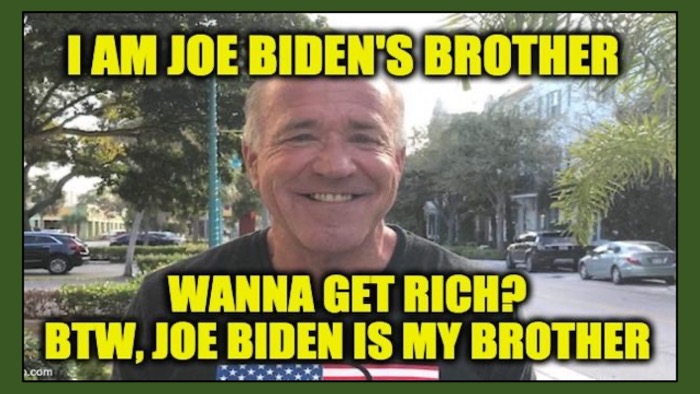 Joe Biden’s younger brother, Frank Biden, is continuing in the family business, making a profit from quid pro quo Joe’s political career. On his brother’s inauguration day, Frank was promoting his relationship with the new POTUS in an ad for a South Florida law firm. According to the website of the law firm, the Berman Law Group, The president’s baby brother is not an attorney; he is listed as an” adviser.”

At the time, he said:

“I have never used my brother to obtain clients for my firm. Our firm has long been involved [with] this lawsuit. Social justice is something I have been involved in for years I will never be employed by any lobbyist or lobbying firm.”

Since then, there have been many other examples of Frank taking advantage of his big brother’s position in the government, but he never admitted to using his brother’s name– until now. Frank has been caught admitting that he peddled his influence affecting U.S. policy during Joe Biden’s presidency.

That is a crime. It’s just that simple.

Frank Biden told people that he makes money by selling his closeness to Joe Biden on at least two occasions, CNN reported (with an accidental outbreak of journalism).

In one instance in October, Frank spoke at a BioSig Technologies conference in Venice, Italy.

The speaker was not a doctor. Nor did he have an extensive background in health care, global or otherwise. But Francis W. “Frank” Biden did have something else: A brother in the White House.

In his speech, Frank Biden talked about his family and his brother’s cancer initiative, according to attendees. Following his remarks, the leader of a trade group who attended the event promptly posted a video from Venice informing members he represents that he’d spoken with Frank Biden about their efforts to lobby the federal government on Medicare reimbursement rules. The president’s brother, he told his members, had agreed to help.

In a second incident, Biden spoke again before a BioSig event in Boston in 2021.

At that event, Frank Biden boasted of “the bully pulpit that I have as a result of the privilege of being associated with my brother Joey,” and vowed to “do everything in my power to support you to get the job done, to get federal dollars to your research,” a video of his speech shows.

The Biden family has been selling Joe Biden’s influence over the federal government for decades. And Frank has always gotten in on the action.

Peter Schweizer’s book ‘Profiles in Corruption: Abuse of Power by America’s Progressive Elite’ ‘revealed that thanks to his big brother’s position as VP, Frank got another job. In March 2009, Joe Biden went to Costa Rica. He was the first high-ranking American official to visit that country in a dozen years. His visit was motivated by Obama’s appointment of Joe as his point man for Costa Rica.

Frank had as much experience reforming Real Estate in Latin America as his nephew Hunter had in the oil business when he joined Burisma.

It’s a strange coincidence that when\ Joe became a point man in an area, someone in his family seemed to get a job from a project in that country.

And now, thanks to Frank, we can see that the Biden crime family is still in business.

I wish I was a relative of President Biden’s. Then he could help me get a very high-paying job also.

This post was a production of iPatriot and Lidblog.