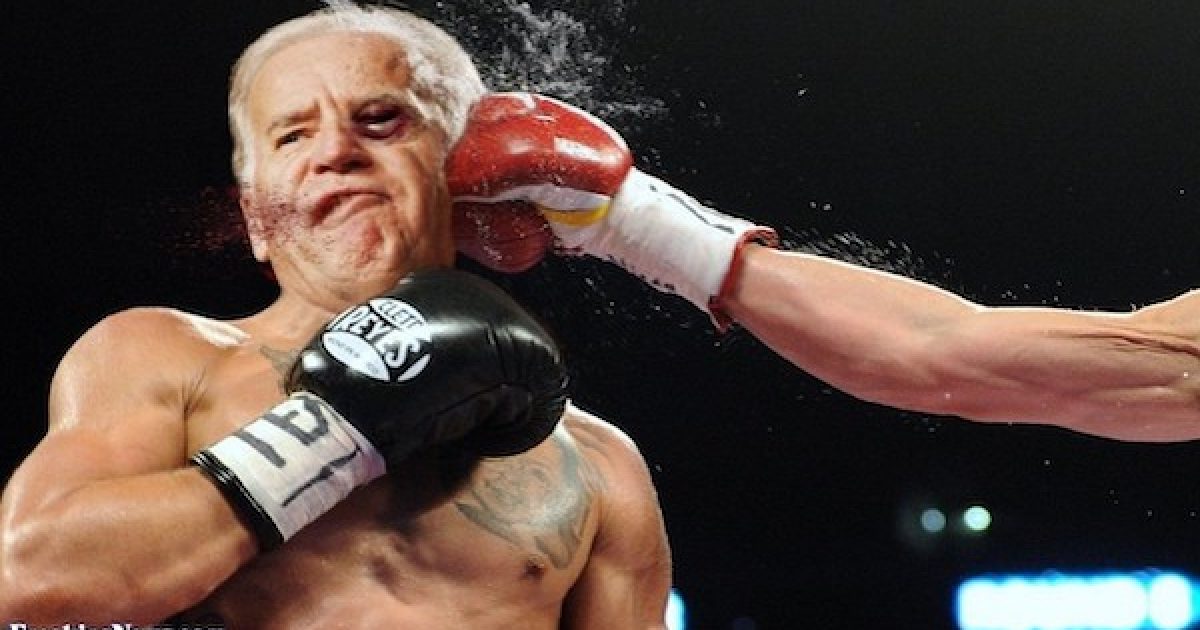 Good Ol’ Joe Biden, the former SCHMOTUS is constantly trying to prove his manhood by talking about violence. At least twice in recent months, the potential 2020 Democratic candidate has threatened to beat up  President Trump. Most recently in this past March, he said of the POTUS,  “If we were in high school, I’d take him behind the gym and beat the hell out of him.” One wonders if Joe’s parent’s taught him about using his words rather than his fists, especially when Biden’s speech at a rally for Democrat Senator Heidi Heitkamp is added to the equation, Biden suggested Heitkamp’sRepublican opponent needed to get roughed up.

“These guys are amazing,” Biden said. “And just stand up proud, stand up to say things that are absolutely mind-boggling.”

In quoting Cramer, the former Vice President turned to a thinly disguised threat.

“Your guy calls farmers’ concerns ‘hysteria,’” he said of Heitkamp’s opponent. “Because he says, ‘they don’t have a very high threshold for pain.’”

“Well, I’ll get the president of the trade union up here. He’ll show him a threshold of pain,” Biden said.

Now if a Republican had said that, the MSM would be tripping over their undershorts as the rushed to eviscerate the speaker for requesting violence against a candidate. But it was “Good Ole’ Joe,” and the story went uncovered.

Three days. That’s how long it took for Biden to morph from Uncle Joe, the man who just wants to bring dignity and civility back to politics, to UFC Joe.

On Tuesday, Biden spoke at a rally with Wisconsin Democrats in which he joined in the chorus of liberal media talking heads to blame President Trump for the shooting at a synagogue in Pittsburgh, and the crazed attempted pipe bomber.

“Folks, this is not who we are,” Biden said. “We need to recognize that words matter. Words matter.”

It was clearly directed at the President and the Republicans who don’t confront him on rhetoric.

Biden would later tell the crowd of Democrat voters that the midterm election amounts to a “battle for America’s soul” and said now is the time to “reset the moral compass.”

When he’s not threatening to have union bosses show Republican candidates pain, Biden has a more thorough history of playing tough guy.

Back in March, Biden lashed out at Trump saying: “If we were in high school, I’d take him behind the gym and beat the hell out of him.”

Crazy Joe Biden is trying to act like a tough guy. Actually, he is weak, both mentally and physically, and yet he threatens me, for the second time, with physical assault. He doesn’t know me, but he would go down fast and hard, crying all the way. Don’t threaten people Joe!

The President is correct. Somebody’s got to sit Joe down and explain that he doesn’t have to threaten violence to prove his virility, they have those little blue pills now.

Did Biden miss the memo on civility that everyone in his party and everyone in media has been preaching about the last week or so?

Come on man, when they go low you should … ya know what, nevermind.

Well, at least we can all agree that it’s never a good idea to “get up in the face of some congresspeople” … er, scratch that too.

Democrat Senator Cory Booker (NJ) encouraged activists on Wednesday to engage in physical confrontation with politicians, telling them to “get up in the face of some congresspeople.” pic.twitter.com/GfGzusxTJ5

The entire party consists of a bunch of wannabes desperate to pretend they’re just as bad a** as Trump, while simultaneously pretending they are the party of civility. They are neither civil nor convincing as tough guys.

But they make a compelling argument as hypocrites.