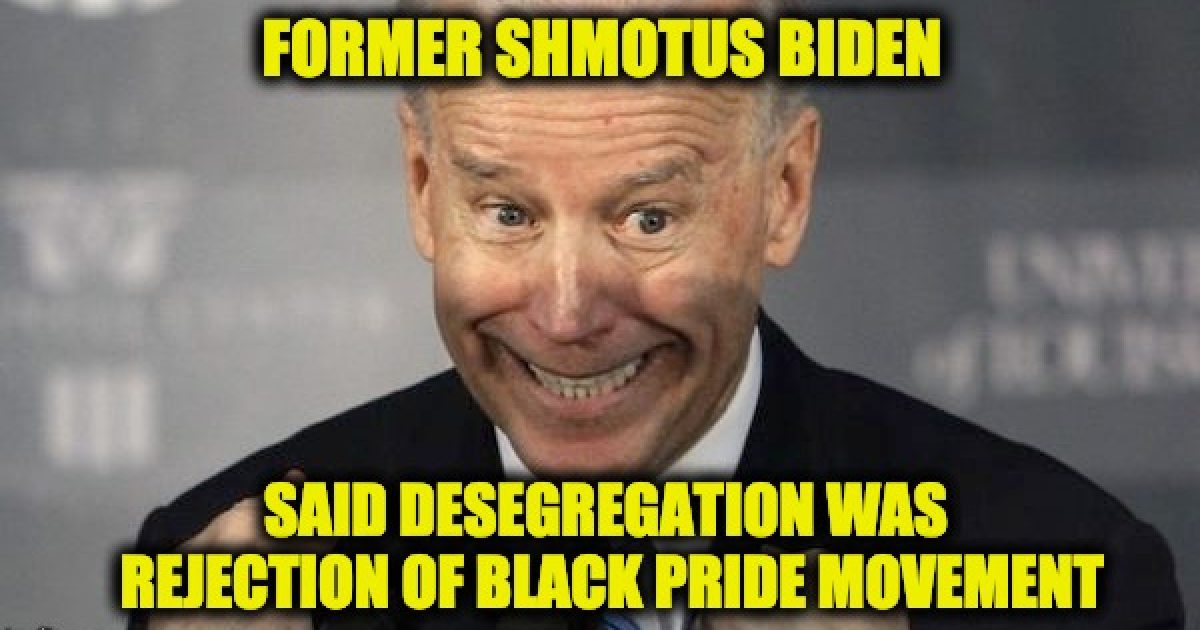 Just as the former VP and SCHMOTUS (the schmo of the U.S.) Joe Biden is preparing a 2020 run for president, his past and very bizarre support for racial segregation is coming back to haunt him.

The issue in question harkens back to the year 1975 when then-Senator Joe Biden was developing a stance against bussing minority children to different schools to defeat segregation.

Biden originally made his comments to National Public Radio, but they were rediscovered by the Washington Examiner.

Back in 1975, Biden was weighing in as a supporter of segregation and an opponent of bussing by bizarrely calling it a matter of “Black pride.”

Biden reasoned that forcing de-segregation on black school kids would be destructive for a strong, proud black identity.

“I think the concept of busing,” Biden told NPR in 1975, “that we are going to integrate people so that they all have the same access and they learn to grow up with one another and all the rest, is a rejection of the whole movement of black pride.”

The Senator added that de-segregation of minorities and whites was “a rejection of the entire black awareness concept, where black is beautiful, black culture should be studied; and the cultural awareness of the importance of their own identity, their own individuality.”

Strangely, years later Biden seemed to completely forget that he was not a fan of efforts to afford black kids a better education.

After being chosen as Barack Obama’s running mate in 2008, Biden said, “The struggle for civil rights was the animating political element of my life.”

How will Biden square these competing descriptions of his own record? Well, we don’t know because he won’t reply to questions about this old interview.

Biden is on the cusp of once again running for the White House. He’s made two other official runs (1988 and 2008), and both failed miserably. But since 1988 he has “considered” running in every single election between then and now. He is a perennial candidate for president who has never gotten anywhere near attaining his goal.

Biden’s only shot at ever being president of the United States was if Obama had been taken out somehow when Biden was serving as vice president. Some say he is a front runner for the nomination as things stand right now in the 2020 race. But, that popularity will no doubt prove chimerical as we get closer to the 2020 campaign season and the more viable candidates appear.