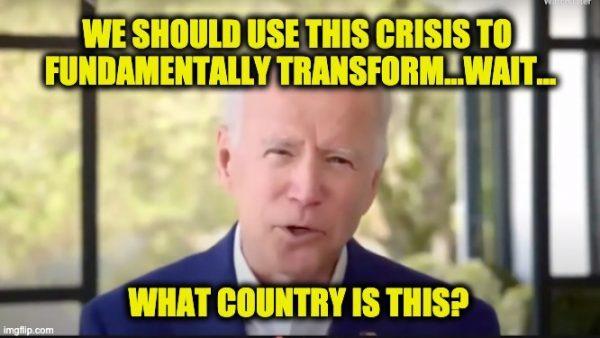 There is a bright side to this, Biden remembered which country he is in (I think) Joe Biden says it again

While speaking to a group of Latino supporters during a Livestream event, presumptive Democrat White House nominee Joe Biden echoed Barack Obama, when Joe said the CoronaVirus pandemic is “an incredible opportunity” to “fundamentally transform” America.

“And I truly think, if we do this right, we have an incredible opportunity to not just dig out of this crisis, but to fundamentally transform the country,” he said.

Make no mistake: Joe Biden is the bannerman for the radical socialist wing of the Democrat Party.

Biden and Bernie are two sides of the same far left coin.pic.twitter.com/RKiLqdy3pm

I believe, because, sort of, the blinders have been taken off, because of this COVID crisis, I think people are realizing, “My Lord. Look at what is possible. Look at the institutional changes we can make – without us becoming a ‘socialist country,’ or any of that malarkey – that we can make to provide the opportunities to change the institutional drawbacks …” from education, all the way through to all the other things we talked about.

Fundamentally transform America? Wasn’t that an Obama line? His transformation resulted in a movement toward a socialist economy–totally stagnating economic growth. Yeah I know Joe said he wasn’t talking about Socialism. but that is malarkey.

On April 17th, Biden said, “We have an opportunity now to take, in a recovery act, a real recovery. We can fundamentally change the science relating to global warming.”

And on April 16th, he said, “I think we have an opportunity now to significantly change the mindset of the American people, things they weren’t ready to do, even two, three years ago,” all thanks to the virus.

Having just been through eight years of Obama’s “fundamental transformation,” we all know what he’s talking about.  For that matter, we’re experiencing something of that now, where government officials like Michigan Dictator, er, Governor Gretchen Whitmer are doing all they can to strip Americans of their livelihoods and freedoms.

Biden isn’t the only one who’s made this kind of declaration.  It seems the entire Democrat Party along with their willing propagandists in the lying liberal media are eager to use the pandemic as an excuse to eviscerate the economy and usher in their radical socialist agenda.

Maybe it’s time voters stand up and give Biden — along with the rest of the liberal cabal working to destroy America — the same message Ed Frederick gave to Whitmer: “F U.”

Hopefully, voters will realize It’s time for voters to turn Biden in, as part of a political  “cash for clunkers” program. Retire the politician and get to keep your own cash.