Will Reporters Ask Joe And Every Democrat To Renounce The Endorsement? 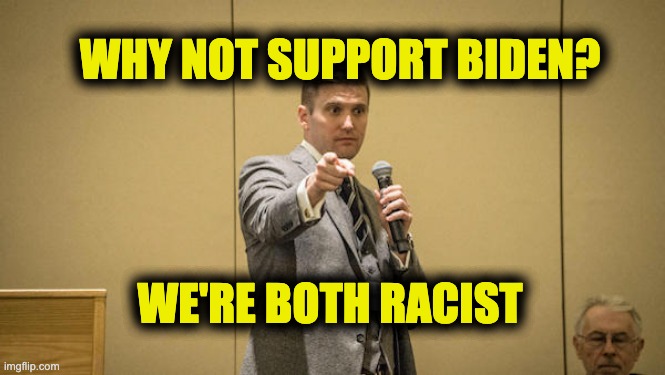 Politics has been a messy business here in the United States for longer than any of us can truly understand, but 2020 has been something else entirely. Like for example, white supremacist Richard Spencer who has been rejected by mainstream conservatives, jumping on the Joe Biden bandwagon.

This is a year in which the hyperbolic beasts of our lesser traits have been let loose upon the general public.  Americans are more agitated than they were in 2016.  We’re more annoyed, and we’re angrier.  And we are certainly more violent. Organize hate has made its way back into the mainstream political conversation in a big way, and in some surprising capacities.

White nationalist Richard Spencer has said he will be backing Democratic candidate Joe Biden in November’s election after previously distancing himself from Donald Trump.

Spencer, who was one of the key figureheads of the alt-right movement, tweeted how he is “on Team Joe” on Monday, adding in a self-made campaign slogan, “Liberals are clearly more competent.”

In a series of tweets, Spencer further explained his reasoning for backing Biden.

“The MAGA/Alt-Right moment is over. I made mistakes; Trump is an obvious disaster; but mainly the paradigm contained flaws that we now are able to perceive. And it needs to end,” Spencer wrote. “So be patient. We’ll have another day in the sun. We need to recover and return in a new form.”

Of course, one has to wonder if a man whose moral bar is so low that he openly admits to racism is capable of using his platform and his image to disparage Biden by endowing him with such an endorsement? Perhaps he is supporting the Democrat because Biden has a long history of being racist

In 2016, when David Duke, former Imperial   Wizard of the Ku Klux Klan announced his support of Donald Trump the mainstream media rushed to condemn Donald Trump so quickly they practically tripped over their underwear to get their articles out. Despite the fact that Trump disavowed the endorsement for much of the campaign, the future president was asked if he supported getting Duke’s endorsement. Other Republicans were asked about Duke’s endorsement ad nauseam also.

Will the mainstream media take the same approach with Spencer and Biden?  I doubt it. That would assume a miracle. Which is the only way to describe it if the MSM treated Republicans and Democrats the same way.

Feds Investigate After Cop Killed Unarmed Minor On Video & Got A $70,000 Bonus Instead Of Justice (Video)
September 28th, 2020 Sons of Liberty Media

BOMBSHELL: Federal intelligence officials cloned phones to surveil and map entire structure of Antifa / BLM terrorist operations in preparation for mass arrests
September 28th, 2020 DC Dirty Laundry
Thanks for sharing!
We invite you to become a Lid insider. Sign up for our free email newsletter, and we'll make sure to keep you in the loop.
Send this to a friend