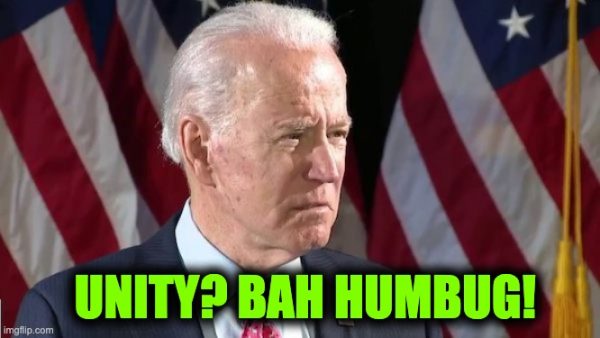 Less than a day after Trump gave an address calling for the nation to come together around a common threat… the Democrats showed their true colors. Joe Biden partisan lies

How did the desiccated Democrat candidates respond? Biden called a press conference and started chucking untruthful rocks at what Trump has done so far.

Here are a couple of excerpts:

Joe Biden says we “need to accelerate the development” of a coronavirus vaccine and when it is available it should be “made widely available” and “free of charge.” https://t.co/ZiAHdZMaE1 pic.twitter.com/5pqPZjx2aY

Biden criticizes Trump and the "disparagement of science" in battling coronavirus: “Unfortunately, this virus laid bare the severe shortcomings of the current administration. Public fears are being compounded by pervasive lack of trust in this president.” https://t.co/ZiAHdZMaE1 pic.twitter.com/Pn4y9TdWb7

Yeah, we know. Orange man bad. Pretty sure we’ve heard that tired old line before. Got anything new? Nah, didn’t think so. By the way…

Since the Left likes ‘fact-checking’ so much, here’s some pushback on Joe’s Coronavirus blather:

President Trump announced restrictions on Travel to and from China in response to Coronavirus.

Joe Biden is outlining why private labs should start running their own coronavirus testing,

Sleepy Joe believes he could have done better than Trump… but when he was actually IN the White House, his administration fell way short.

“So, from my perspective, what it relates to is mitigation. If you’re out in the middle of a field when someone sneezes, that’s one thing. If you’re in a closed aircraft or closed container or closed car or closed classroom, it’s a different thing.”

A little more than one hour later, Biden rushed out a statement backing off.

Biden’s remarks contradicted more restrained advice from President Barack Obama and the federal government — and the last thing the White House wants to do right now is shut down the airline industry and big-city subways out of mass panic.– Breitbart

And what about the O’Biden-Bama H1N1 response?

While American health officials declared a public health emergency on April 26, 2009, then-Homeland Security Secretary Janet Napolitano downplayed the announcement, calling it “standard operating procedure,” adding that she would rather refer to it as a “declaration of emergency preparedness.” It wasn’t until four months later in October, that then-President Obama himself declared an H1N1 national emergency.

Since the H1N1 flu pandemic began in April, millions of people in the United States have been infected, at least 20,000 have been hospitalized and more than 1,000 have died, said Dr. Thomas Frieden, director of the Centers for Disease Control and Prevention. [emphasis added] — PJMedia

Karl Rove was on TV telling us about a mailer Joe sent out, using the virus as a fundraising tool. The call to action went like this: “This isn’t the time to be complacent. If you are ready to fight for the soul of this nation, you can start by donating to elect Joe Biden by clicking the button below.”