Joe Biden Has Lowest POTUS Confidence Level In Half Century 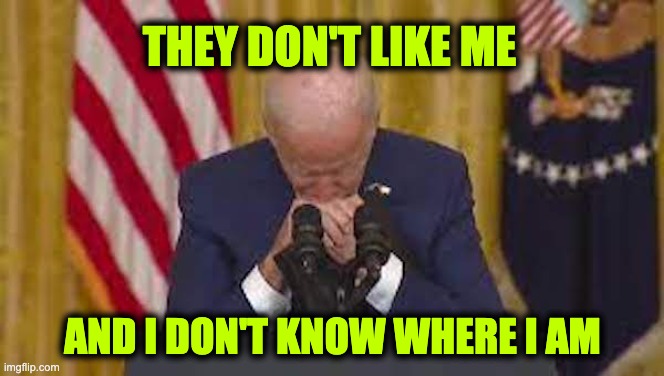 Can he blame this on Putin? As members of his own party avoid Biden as if he tested positive for some new super-duper COVID,18% of Americans believe this nation is heading in the wrong direction, record inflation, etc. American voters have given the lowest approval level for Joe Biden and his administration than any other president in the past half-century.

The latest Gallup poll, less than a quarter of those [total adults] surveyed have “confidence” in the presidency, worse than during the Trump presidency and nearly as bad as the end of the George W. Bush presidency.

Going back to 1975, Gallup has never recorded a confidence reading as low as Biden’s 23%.

“The largest declines in confidence are 11 percentage points for the Supreme Court — as reported in late June before the court issued controversial rulings on gun laws and abortion — and 15 points for the presidency, matching the 15-point drop in President Joe Biden’s job approval rating since the last confidence survey in June 2021,” said Gallup.

Per Rasmussen, only 18% of likely voters believe the country is going in the right direction. During the first week of his presidency, that number is 35%,

CNN, a leftist media vehicle, wrote, “The Left Is Restive, Unhappy, And Fed Up.”

Top Democrats complain the President isn’t acting with — or perhaps is even capable of — the urgency the moment demands.

“Rudderless, aimless, and hopeless” is how one member of Congress described the White House.

Two dozen leading Democratic politicians and operatives, as well as several within the West Wing, tell CNN they feel this goes deeper than questions of ideology and posture. Instead, they say, it gets to questions of basic management.

Additionally, Obama’s political guru David Axelrod told Jake Tapper about Biden’s “support” in his own party on CNN’s The Lead:

“This is the lot that Biden finds himself in. There is a sense that things are out of control and he is not in command this[unable to pass an abortion law] lends to that. Inflation, no one president can control inflation, but it is a gally force wind right now it’s effecting politics very hard. You heard him on the gas tax holiday, but he is not going to get the gas tax holiday and there are a lot of Americans who are skeptical about whether it would help. This is a very fraught environment for him right now,” Axelrod said.

In other words, even his own party thinks he’s doing a lousy job. 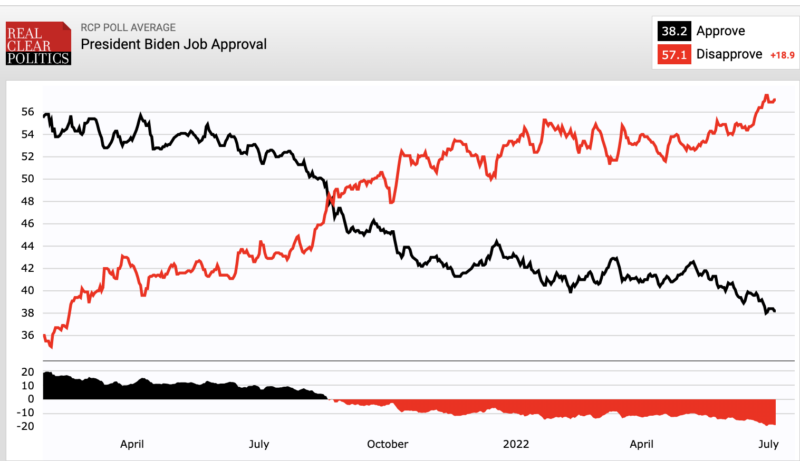 Using the Real Clear Politics average of polls, we see that as his “honeymoon” period eased, so did his approval. But it took a steeper drop during the Afghanistan withdrawal. Although I do not have actual poll numbers. IMHO, the accelerated drop was not because of the withdrawal itself. But because of his lies and that he left Americans and Afghanis, the U.S. promised to evacuate if the Taliban ever retook the country.

To summarize, despite the claims by Democratic Party talking heads, American voters and even Biden’s own party overwhelmingly believe Joe Biden is a failure. With only four months before the midterm election and no indication that he will accept blame for his policy or begin to pivot, it’s more apparent than ever that the midterm election will be s record failure for the Democrats.