Joe Biden’s Hand In Corruption, Subversion And Crime In Guatemala 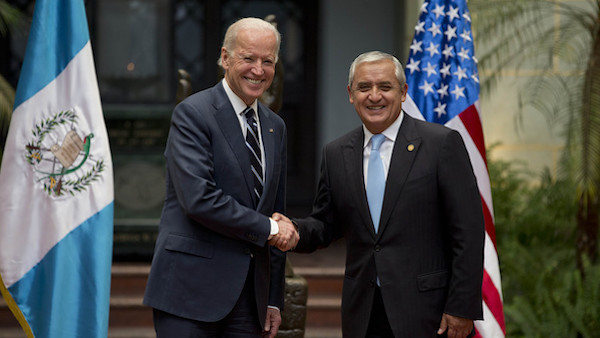 In 2014 and 2015, then-Vice President Joe Biden traveled to Guatemala three times to pressure the government to maintain a United Nations body known as the International Commission Against Impunity in Guatemala (CICIG). CICIG was established in Guatemala in 2006 under the pretext of prosecuting “crimes committed by members of illegal security forces and clandestine security structures” during Guatemala’s long civil war. Instead, CICIG — an international body unaccountable to Guatemalan law, worked with Guatemala’s Justice Ministry to arrest and jail the left’s opponents. Many remain illegally detained to this day without trial. Two prominent doctors and a Guatemalan congressman died in jail. All suffered ill health, did not receive proper treatment and were detained much longer than legally allowed. None got a trial. All were absolved following their deaths.

Pérez reluctantly agreed to renew CICIG’s charter. He was then pressured to resign under accusations of corruption and stripped by the Guatemalan Congress of legal immunity. The day after he resigned, he was arrested and thrown in jail. He has remained there ever since, without trial. In a Daily Caller interview from jail, Pérez called these efforts “a coup without bullets.”

Pérez said that, “CICIG amounts to a new form of U.S. interference in Guatemala’s affairs and that his country has surrendered its sovereignty over its justice system by allowing the unit to operate.”

CICIG’s litany of abuses includes arbitrary arrest, detention, and interrogation without charges or trial, fabricated evidence, illegal break-ins and denial of due process, pretrial detention for years longer than allowed by Guatemalan law, and many other abuses. Some of the charges it has brought are valid, given endemic corruption in Guatemala. But CICIG’s goal was not to stem corruption, rather use it as a pretext to dispatch the left’s enemies and install vastly more corrupt individuals who will advance the Communist cause in Guatemala.

CICIG’s leader from 2013 forward was Ivan Velásquez Gómez, a former judge from Colombia with close ties to the Colombian narco-terrorist group, FARC. Former Colombian President Alvaro Uribe has said that as a judge, Velásquez battled to absolve the Colombian narcoterrorists of their decades of crime and terrorist atrocities.

In addition to Velásquez, Another key player has been Claudia Paz y Paz, chosen to be Guatemala’s Attorney General in 2010 under pressure from CICIG and Obama’s Ambassador to Guatemala, Stephen McFarland. Paz y Paz is a Communist guerrilla sympathizer. Her father was a member of the Castro-supported Rebel Armed Forces (FAR) that assassinated U.S. Ambassador John Gordon Mein in 1968 and Germany’s ambassador to Guatemala, Karl von Spreti, two years later.

Paz y Paz oversaw numerous extra-judicial arrests and confinement of political opponents. She was accused of giving illegal orders to judges and her own prosecutors, and shielding from legal action bands of armed leftist militias who roam rural areas terrorizing the indigenous peoples. The militias are remnants from Guatemala’s civil war, in truth, a Castro-supported Communist insurgency (1960-1996).

She particularly targeted the military, which defeated the communist insurgency with help from the rural population. Military men have received multiple life sentences for “crimes against humanity” while judges disbar evidence proving their innocence and guilt of the guerrillas.

In 2012, a young prosecutor named Gilda Aguilar attempted to arrest members of one of these militias. Paz y Paz dropped the charges, calling the militia a “human-rights group.” She threw Aguilar off the case and launched an investigation of her. Three weeks later, Aguilar narrowly escaped an assassination attempt by the same group. Instead of investigating, the prosecutor asked the court to dismiss the case — as though it had never happened. Aguilar quit and brought dereliction of duty charges against Paz y Paz.

The Obama administration pressured President Pérez to assure Paz y Paz’s reappointment when her term was up in 2014, knowing full well the allegations against her. They similarly supported the appointment and advancement of many other radicals, and the State Department continues to do so.

The indigenous populations of Guatemala have faced the brunt of the Communist offensive in Guatemala since the beginning of the civil war. With the Obama administration’s full knowledge, armed leftist militias, Paz y Paz’s “human rights groups” control rural areas, sabotage or block desperately needed economic development, and engage in terrorism and crime. The 20-minute video embedded below shares moving testimony from people terrorized by these groups:

The militias’ spread was enthusiastically supported by the Obama administration. Their activities dramatically increased with the administration’s promotion of leftists like Judge Gloria Porras and Attorney General Paz y Paz to influential positions in Guatemala’s legal system. The increase in crime over this period is shown in the colored areas of the map below. They are referred to charitably as “Social Conflict Zones.” 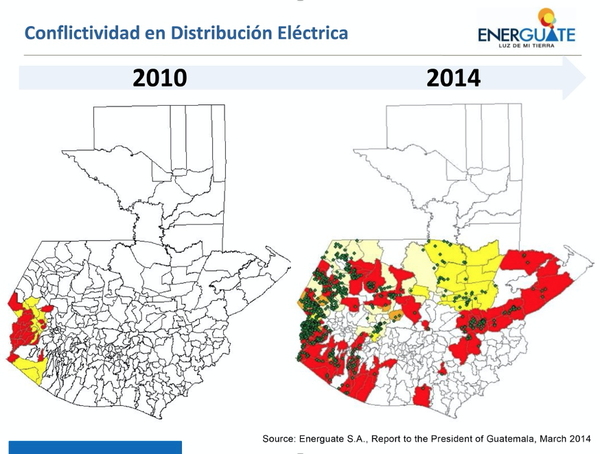 The Obama administration responded with the DACA (Deferred Action for Childhood Arrivals) program in 2012. This caused a massive exodus of minors from Northern Triangle nations illegally entering the U.S.  In 2011, the Border Patrol apprehended only 4,321 minors. That number increased to 68,541 in 2014. Most came from Guatemala. The migrant caravans that have since swamped our borders were instigated by Central American leftists with assistance from tax-exempt and taxpayer-funded, open-borders groups in America. This entire effort was a premeditated campaign by the Obama administration.

Former President Pérez claimed in a Mexican Newsweek article that Biden pressured him to support a Guatemalan contract with the pharmaceutical firm Baxter International. He said, “We had pressure from Vice President Biden, not only when he came to Guatemala, but when I visited Washington, to grant a contract to Baxter…” Pérez asserted that:

Biden is a partner of Baxter Pharmaceuticals, and [he] mentioned that even the U.S. Embassy in the country requested the meeting with his private secretary and his general secretary so they could influence Baxter to win the bid. “They were accompanied by embassy staff, Baxter representatives, to ask us and tell us that Baxter had that contract and that Baxter should win it back,” he said.

Pérez’s claims were repeated by Julia Amparo Lotán Garzona, the former labor sector representative of the Executive Board of the Guatemalan Institute for Social Security. In testimony before the Guatemalan Truth Commission investigating CICIG, she said:

According to Truth Commission testimony, CICIG jailed employees of Guatemala’s social security system, including Garzona, a nurse and union representative, without trial, on the pretext that all took bribes to replace a contract for Baxter medical equipment with equipment made in Mexico. This action was widely viewed as yet another abuse of power by CICIG and included some people close to President  Pérez. Was it coincidental that this occurred simultaneously? Biden was lobbying  Pérez  to extend CICIG’s contract while also lobbying him on behalf of Baxter?  Pérez ultimately agreed to both.

We have been unable to confirm a Biden financial interest in Baxter, but In his book, Promise Me, Dad, Biden stated: “The President asked me to take over the job of repairing our wobbly relations across the entirety of the Americas — the Northern Triangle, Brazil, the Caribbean, everything.”[1]

According to Peter Schweizer’s new book Profiles in Corruption, Joe Biden met with the President of Costa Rica in 2009, and a few months later news broke of a “new multilateral partnership, ‘to reform real estate in Latin America.’” Biden’s brother, Frank, envisioned a huge development project with “thousands of homes, a world-class golf course, casinos, and an anti-aging center,” in the Costa Rican jungle.[2]

To support the project’s energy needs, the Costa Rica National Power and Light Company would build the Guanacaste Solar Park, the largest solar farm in the nation — with Frank’s company Sun Fund Americas as a partner, even though Frank had no experience in the energy field.[3] The U.S. government provided a $6.5 million loan for the project and $47.5 for another Sun Fund solar project in Jamaica.[4]

Given the Biden family’s other pay-to-play schemes in Russia, China, Kazakhstan, Ukraine, and who knows where else, it would seem reasonable that Biden might expect something in return for pushing Baxter. In fact, with Biden, it would be surprising if there were not some quid pro quo.

Guatemala is now on the cusp of becoming a Communist state thanks to Joe Biden, Hillary Clinton, Barack Obama, and their minions. This has also been in the works for decades in America but has come out of the closet since President Trump’s election.

If Joe Biden is elected president, this agenda will be turbocharged. Biden’s “Build Back Better” slogan comes directly from the U.N. — which not coincidentally calls for socialist redistribution in Latin America — and the World Economic Forum, which envisions using the Chinese Communist COVID-19 “pandemic” to “reinvent capitalism.” Biden will impose smothering taxes and regulations, fling open the doors to Red China and other enemy nations, and open the border to an unprecedented flow of migrants from Central America and nations from across the globe. Amnesty for illegals will create the “permanent Progressive majority” Democrats seek. Joe Biden will line his pockets without restraint, and we will lose our country. Forever. This is the most important election in our nation’s history.

James Simpson is an economist, businessman, and investigative journalist. His latest book is The Red Green Axis 2.0: An Existential Threat to America and the World. Follow Jim on Twitter & Facebook.