Acosta Only Cares About Making Himself Famous. 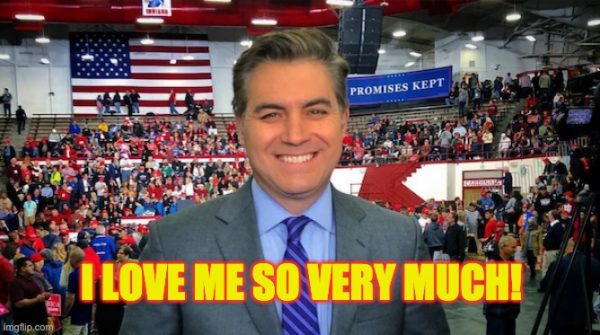 It’s unknown whether any White House reporter has been drop-kicked in the butt by as many different people in one administration as Jim Acosta of CNN. There are very few people in the administration who likes or respects him. He is considered by many observers as the most unprofessional member of the White House press corps. Steve Krakauer, a CNN producer-turned media watchdog, used to work with    Acosta. In the latest edition of his media newsletter, Krakauer confirmed what we all knew, his former colleague Acosta, is a fame-seeking attention-getter who doesn’t care about the news as much as he cares about making himself famous.  Jim Acosta Fame-Seeking Attention-Getter

To get an idea of Jim Acosta’s priorities, here was his Twitter profile background last year, during his book tour: 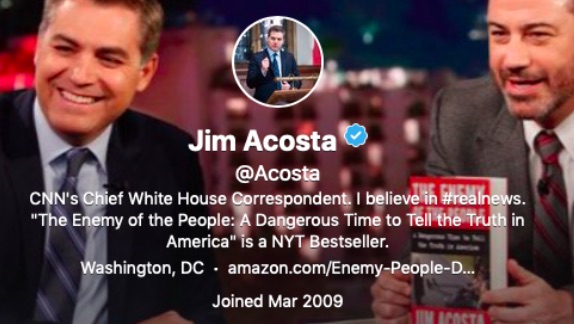 Krakauer believes that Acosta is a good guy who has the potential of being a great White House reporter if that was his goal.

But that’s not Jim Acosta’s goal. Jim Acosta wants to be famous. I’ve written before, three years ago, [below] that Acosta clearly aspires to use this opportunity to spar with President Trump, #Resistance Signal on Twitter and generally build his brand to move on to bigger things – a prime time show maybe, or at least a few late-night TV appearances.

2 caveats: II’m a CNN fan, full of many great journos, I loved my 3 years working there. I’m not a Trump fan, and didn’t vote for him. /2

Krakauer jokes that if Acosta was a plant for the Trump campaign to make the press look bad, he wouldn’t; be surprised. Acosta is also the enemy of legitimate reporters who care about the truth and doesn’t make themselves the center of each story.

Then Trump jumps in and counters every point. “There’s nothing happy about it, Jim. This is ‘sad talk,'” said Trump. “These are the saddest news conference that I’ve ever had. I don’t like doing them. You know why? Because I’m talking about death…There’s no ‘happy talk’ Jim. This is the real deal.”

The former producer’s newsletter isn’t the first time a CNN insider has let it be known that Acosta is not liked by his colleagues at the network.  During the summer of 2017, the Washington Examiner reported that Acosta’s confrontations have become so brazen and obnoxious that even his fellow “journalists” at CNN have begun to express their disdain for Acosta’s ridiculous behavior.

“One of Acosta’s colleagues, an on-air conservative political commentator for CNN, said he sees an ulterior motive in Acosta’s actions. He said Acosta’s widely noticed clashes with the White House give the impression that he wants a new role at the network.

“‘He’s angling to host an opinion show,’ he said. ‘These [White House] briefings are his auditions.’

“Another CNN employee in Washington, D.C. made it clear that Acosta’s outbursts aren’t as popular behind the scenes as CNN sometimes makes them out to be on the air.

“‘Ugh, just ugh,’ a producer told the Washington Examiner when asked about Acosta.

Jim Acosta’s priority, to make himself famous, combined with his arrogance towards news-watching Americans an attitude shared by others at the network is a big factor in the once-mighty CNN’s collapse in ratings. Perhaps one day he will learn the difference between famous and infamous.