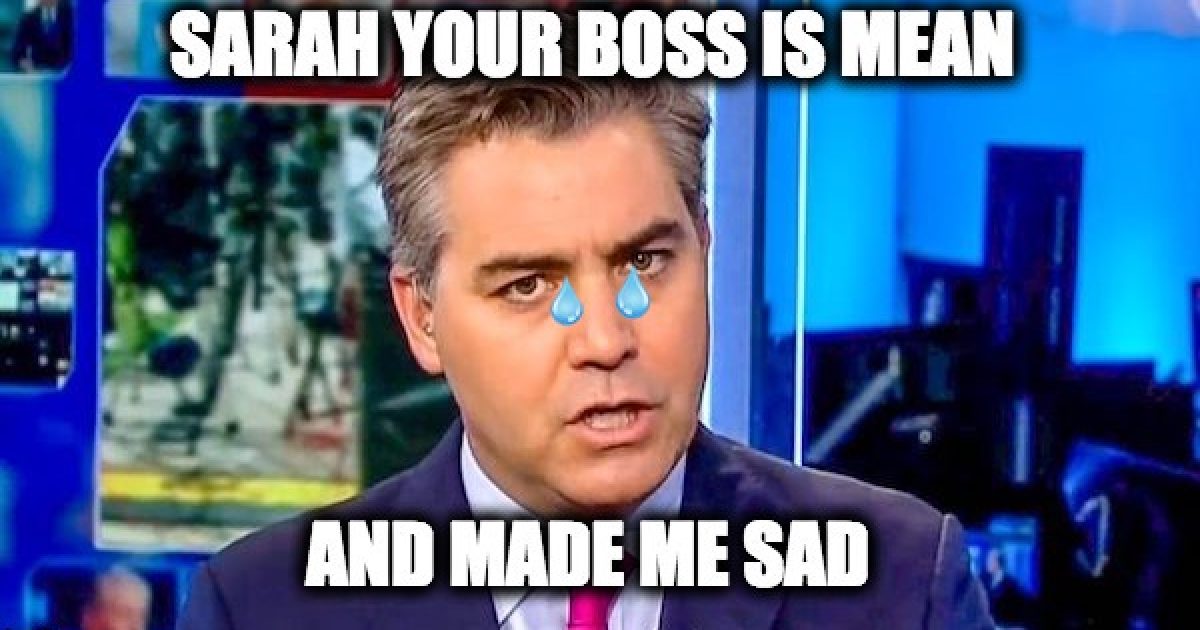 At the August 2nd press briefing CNN’s Jim Acosta played his usual role of the unprofessional whiner. And when he didn’t get the answer, he wanted he walked out like a crybaby.

One of the primary things about the job of a press secretary for the President or anyone else is when they are speaking in an official capacity they are to give the opinions of their boss. While it is certain, they have their own views their job dictates that they keep them to themselves especially after the “boss” has taken a position.  That rule is probably the first thing that any reporter covering a politician learns (especially if they are covering the White House).

It started with a question from Sarah McCammon from NPR

Huckabee Sanders: The President is rightfully frustrated. 90 percent of the coverage on him is negative despite the fact that the economy is booming, ISIS is on the run, and American leadership is being reasserted around the world. Just this week, the media refused to cover his remarks in Florida highlighting effort on workforce development. In fact, the pooler for the press said there was no news made despite the fact the governor of the state joined with dozens of business across the state of Florida to announce thousands of new jobs. That may not be news in Washington, D.C. But I can assure you it’s news in the state of Florida that people that didn’t have a job before this President took office have a better opportunity and an opportunity to move forward. That’s actually real news and something that people in the state of Florida and across this country appreciate and that was totally ignored. Not only that before, a journalist on CNN claimed that the President hadn’t taken questions in over a week despite the fact that same journalist in a live shot from the two and two press conference that the President had with the Prime Minister of Italy just moments after making that accusation. With this sort of misinformation and lack of interest that’s so pervasive in the media, it’s completely understandable for the president to be frustrated.

The NPR question was legit, she asked what the President thought.

Even though the rude Acosta interrupted Sanders answer to McCammon, she called on baby Jim anyway who begged her to make a public statement disagreeing with her boss.  I don’t know whether or not Sanders agrees with the statement, that’s because she is good at her job. But just because the Press Secretary is professional, Acosta remains the anti-Professional.

Jim are you stoned or what? Sanders’ job is to present the President’s opinion not hers. When she is not in the Press Secretary role, she might disagree with her dad Mike Huckabee, but not the POTUS. So She answered:

Huckabee Sanders: If the President has made his position known, I also think it’s ironic —

Acosta: Would you — would you mind telling us —

Huckabee Sanders: I politely waited and I even called on you despite the fact that you interrupted me when I calling [sic] on your colleague.

Acosta: Well, you were attacking our news organization, [REPORTERS GROAN] which is why I interrupted.

Acosta: But if you — if you finish, if you would not mind letting me have a follow-up, that would be fine but —

That’s when the Press Secretary decided to let him have it by explaining the hypocrisy of his whining:

Huckabee Sanders: It’s ironic, Jim, that not only you and the media attack the President for his rhetoric when they frequently lower the level of conversation in this country repeatedly. Repeatedly, the media resorts to personal attacks without any content other than to incite anger. The media has attacked me personally on a number of occasions, including your own network. Said I should be harassed as a life sentence, that I should be choked. I.C.E. Officials are not welcomed and personal information is shared on the internet. When I was hosted by the Correspondent’s Association, of which almost all of you are members of, you brought a comedian up to attack my appearance and called me a traitor to my own gender. [REPORTERS GROAN] In fact, as I know — as far as I know, I am the first press secretary in the history of the United States that’s required Secret Service protection. [BRIAN KAREM SHOUTING — Acosta GESTURES HIM TO STOP] The media ratchets up the verbal assault against the President and everyone in this administration and certainly we have a role to play, but the media has a role to play for the discourse in this country as well.

Even when she gave the passionate answer above what she was really doing is selling the President’s position. Acosta wasn’t moved he wanted the person whose job it is to sell the Presidents opinion to give her own.

Acosta: And, Sarah, if you don’t mind — hold on — if I may follow up, excuse me, you did not say in the course of those remarks that you just made that the press is not the enemy of the people. Are we to take it from what you just said, we all get put through the ringer, we all get put in the meat grinder in this town, and you’re no exception and I am sorry that happened to you. I wish that had not happened. But for the sake of this room, the people who are in this room, this democracy, this country, all of the people around the world are watching what you are saying, Sarah, and the White House for the United States of America, the President of the United States should not refer to us as the enemy of the people. His own daughter acknowledges that and all I’m asking you to do, Sarah, is to acknowledge that right now and right here.

Huckabee Sanders: I – I appreciate your passion. I share it. I’ve addressed this question. I’ve addressed my personal feelings. I am here to speak on behalf of the President. He has made his comments clear.

After the Presser, Acosta proved he still doesn’t “get it:”

I walked out of the end of that briefing because I am totally saddened by what just happened. Sarah Sanders was repeatedly given a chance to say the press is not the enemy and she wouldn’t do it. Shameful.

Just once before I die, I would like to see Sarah Huckabee Sanders stand at that podium and really ream out Jim Acosta for the entitled unprofessional whiner that he shows himself to be every time he is at a presser. But that will never happen, sadly Huckabee Sanders has the class that Jim Acosta doesn’t have.

Below is a video of the Acosta/Huckabee Sanders exchange: