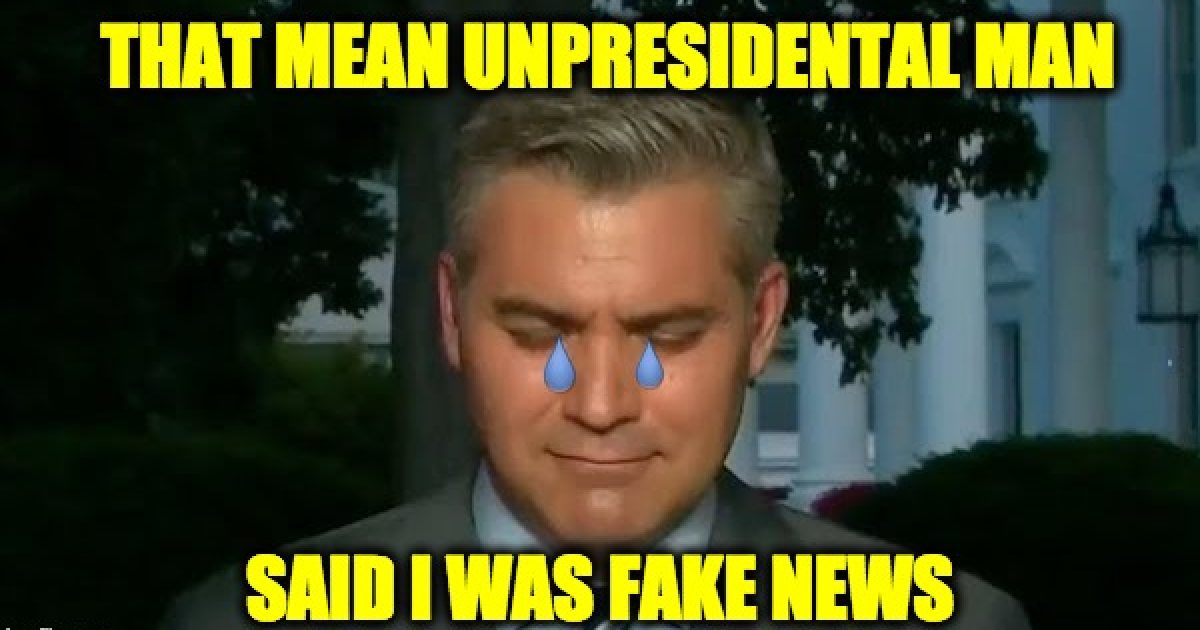 While participating in a media event at the Newseum in Washington D.C., CNN propagandist Jim Acosta declared, among many other things, that it’s the right and “duty” of the media to ask President Trump if he’s a racist, adding that it’s not right for the chief executive to call CNN and other far-left outlets “fake news.” And he admits that while he has first amendment rights to freedom of the press, President Trump doesn’t have first amendment rights to free speech.

Writing at NewsBusters, Kristine Marsh said the event was sponsored by the left-wing Committee to Protect Journalists, which set the tone for the anti-Trump rants, declaring that it was “abundantly clear” that President Trump “[was] doing serious damage to the U.S. standing globally, and embolden[ing] autocrats around the world.”

Acosta and fellow CNN “journalist” April Ryan kept the crazy flowing by emphasizing how dangerous Trump is to freedom and democracy, Marsh wrote.

He claimed, for example, that he “absolutely receives death threats,” which prompted Ryan to state:

It’s very real for some of us. … For me it’s real. I’ve been getting death threats just for asking a question. A logical question. … [T]he FBI is on speed dial, so is the Secret Service and local police department.

Acosta added that he read a book recently whose cover art showed a t-shirt with a journalist, a rope, and a tree, reading, “Some assembly required.” Acosta complained the tacky t-shirt was somehow proof that we would soon be seeing dead journalists on the side of the road:

I remember seeing that t-shirt at Trump rallies, during the campaign. We have to get through our minds, that is un-American. We don’t kill journalists in this country. The moment that happens, the moment that there’s a dead journalist on the side of the highway, because of the rhetoric coming out of the White House from the President of the United States, is a day that we become something less than the United States of America. Full stop. End of story

Acosta worried that it would take “an intervening event” of that kind, to “shake people’s consciousness, to sort of snap them out of this. … [S]ome folks are under a spell where they think it’s okay to go after us like this, and they’re going to have to get it shocked out of their system,” he ranted.

Translation: Acosta thinks that Trump supporters are ready to kill journalists, based on a photo of a t-shirt he once allegedly spotted — on a book cover.

Addressing the issue of Trump’s alleged “sh*thole” comment, the legitimacy of which has been questioned by several people at the meeting where he supposedly made the statement, Acosta declared: “Goddammit, I’ll say it out loud, but it is our right, it is our duty, it is our role to ask the President of the United States if he’s a racist!”

But that’s not what he asked— after the President answered the “are you a racist” question in the negative a few times the previous 24-hours, the POTUS was sitting with the Prime Minister of Norway in the Oval Office discussing their day of discussions when Acosta barked out his question.

“I want them to come in from everywhere… everywhere. Thank you very much, everybody,” Trump responded as Acosta continued to bark questions.

Acosta wasn’t looking for the president’s answer he was looking to make a political point:

“Just Caucasian or white countries, sir? Or do you want people to come in from other parts of the world… people of color,” Acosta shouted.

At the Newseum event, Acosta continued, “Let me just get this out of my system,”

No Baby Jim, you are not an opinion columnist, your job is to keep your beliefs to yourself and report the news objectively.

You should be sorry but you aren’t. When Trump pointed to the door and said, “Out,” he was showing you to be the unprofessional reporter that you are. The President had answered the “racist” question a few times already and had just told you that he wanted people from everywhere. You followed up to make your personal politics point. That’s no badge of honor, it’s a mark of Shame.

Acosta later said the network’s agenda is “to tell the truth and give people the facts.” YES! Truth & Facts! When the network’s reporter deviates from the truth and the facts they are criticized–that’s why it’s called fake news. Acosta also claimed that Fox News, in contrast, “had an agenda, which is to turn people off of the press. It’s determined, it’s purposeful, and it’s bad for our democracy.” Sure Fox News’ agenda is to destroy itself. What he was really doing is bashing Fox for not joining the “party line” of the rest of the media.

Jim Acosta has no conception of what a professional reporter is supposed to do. CNN hires commentators who give their opinion and hosts like Jake Tapper who is tasked with reporting and opinion. But Acosta fails to realize reporter, he is supposed to report facts add some relevant context but keep his opinions out of it. And that each and every American has the right to free speech, including Presiden Trump.

I would add that Acosta is an adult–being a constant whiner should be out also.

Here’s video, if you can stomach it: