Jews in Russian Leaning Ukraine Told To Register or Be Deported 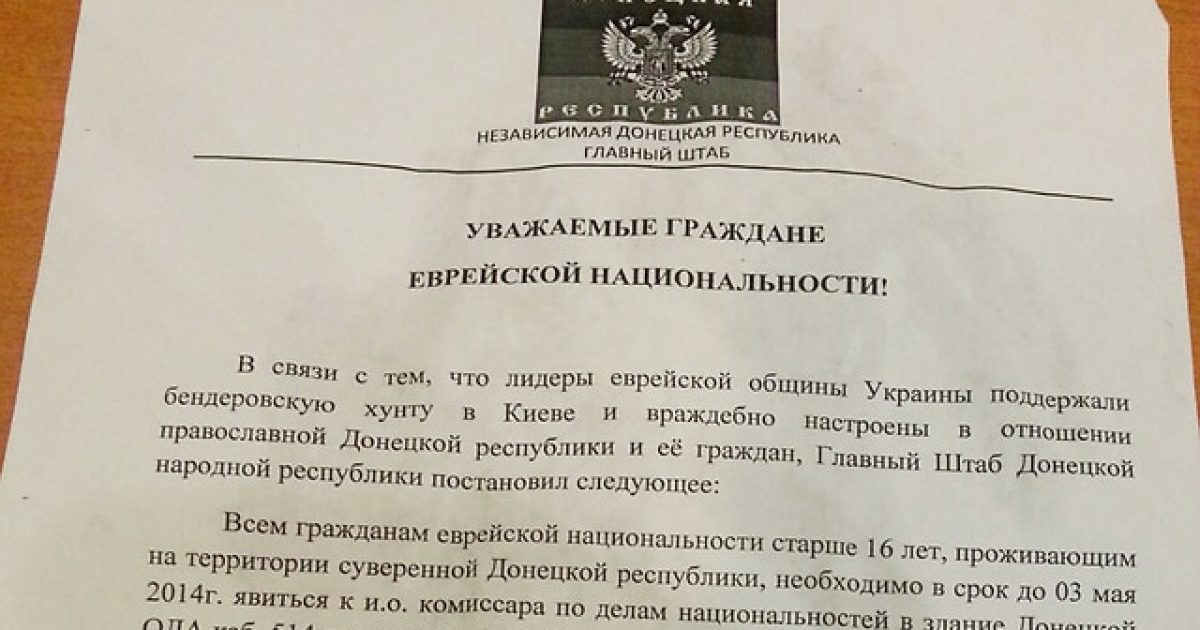 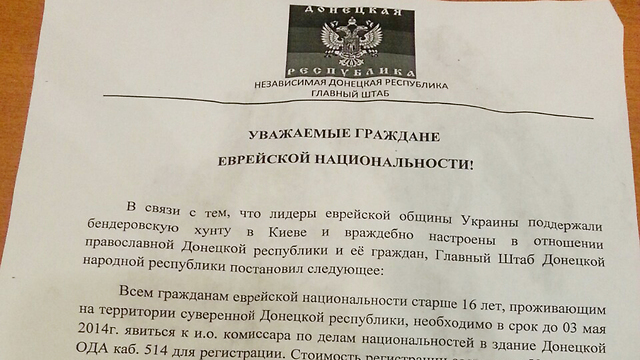 A leaflet distributed in Donetsk, calling for all Jews over 16 years old to register as Jews .  The leaflet demanded the city’s Jews supply a detailed list of all the property they own, or else have their citizenship revoked, face deportation and see their assets confiscated.

Donetsk, a Ukraine province with 4.3 million people – 10 percent of Ukraine’s population – and 17,000 Jews, is home to much of the country’s heavy industry, and is thus the biggest prize of the eastern regions where pro-Russian separatists have captured government buildings in the past week.

The leaflet, signed by Chairman of Donetsk’s temporary government Denis Pushilin, was distrbiuted to Jews near the Donetsk synagogue and later in other areas of the city where pro-Russians activists have declared Donetsk as an independent “people’s republic”, defying an ultimatum from Kiev to surrender.

Not exactly the way these Jews want to celebrate Passover.

“Dear Ukraine citizens of Jewish nationality,” the flyer began, “due to the fact that the leaders of the Jewish community of Ukraine supported Bendery Junta,” a reference to Stepan Bandera, the leader of the Ukrainian nationalist movement which fought for Ukrainian independence at the end of World War II, “and oppose the pro-Slavic People’s Republic of Donetsk, (the interim government) has decided that all citizens of Jewish descent, over 16 years of age and residing within the republic’s territory are required to report to the Commissioner for Nationalities in the Donetsk Regional Administration building and register.”

The leaflet detailed what type of documents the Jewish citizens would need to supply: “ID and passport are required to register your Jewish religion, religious documents of family members, as well as documents establishing the rights to all real estate property that belongs to you, including vehicles.”

If the message was not made clear enough, the leaflet further stipulated the consequences that would come to those who failed to abide by the new demands: “Evasion of registration will result in citizenship revoke and you will be forced outside the country with a confiscation of property.”

To add insult to injury, the leaflet demanded the Jews pay a registration fee of $50.

In ten days Jews observe Yom HaZikaron laShoah ve-laG’vurah (יום הזיכרון לשואה ולגבורה; “Holocaust and Heroism Remembrance Day”), known colloquially in Israel and abroad as Yom HaShoah (יום השואה) and in English as Holocaust Remembrance Day, or Holocaust Day, is observed as a day of commemoration for the approximately six million Jews and five million others who perished in the Holocaust as a result of the actions carried out by Nazi Germany and its accessories, and for the Jewish resistance in that period.

Emanuelle Shechter, from Israel, received a copy of the leaflet via Whatsapp from his friends in Donetsk. “They told me that masked men were waiting for Jewish people after the Passover eve prayer, handed them the flyer and told them to obey its instructions.”

In a response to a request by a Ukrainian Jewish website, Pushilin, the interim government’s regional chairman, confirmed that the flyers were distributed by his organization, but denied any connection to the leaflet’s content.

Because this hate is coming from the Ukraine the world will protests, when the anti-Jewish hate comes from the Muslim world, in the form of incitement, laws, and terror there is nothing but silence.

Near the end of the Seder, Jews open the door to the outside the purpose of which most people say is to symbolically invite the Prophet Elijah to join the meal. But others believe the reason has more to do with the prayer which comes next:

“Pour out Thy wrath upon the nations that know Thee not, and upon kingdoms that did not call upon Thy name. For they have consumed Jacob, and laid waste his habitation. Pour out Thy rage upon them, and let Thy fury overtake them. Pursue them in anger and destroy them, from under the heavens of the LORD.”

It is unique in Jewish Prayer we don’t usually pray for bad things to happen. But Passover is the celebration of our freedom as a people. Perhaps the reason to open the door and make that prayer is a show to the haters like the slime in the Ukraine that we will not stand for your hatred.  The Shoah and the acceptance of Muslim hatred teach the Jews that we cannot trust anyone but ourselves to protect ourselves.

UPDATE: Jake Tapper Reports that the leaflets were real