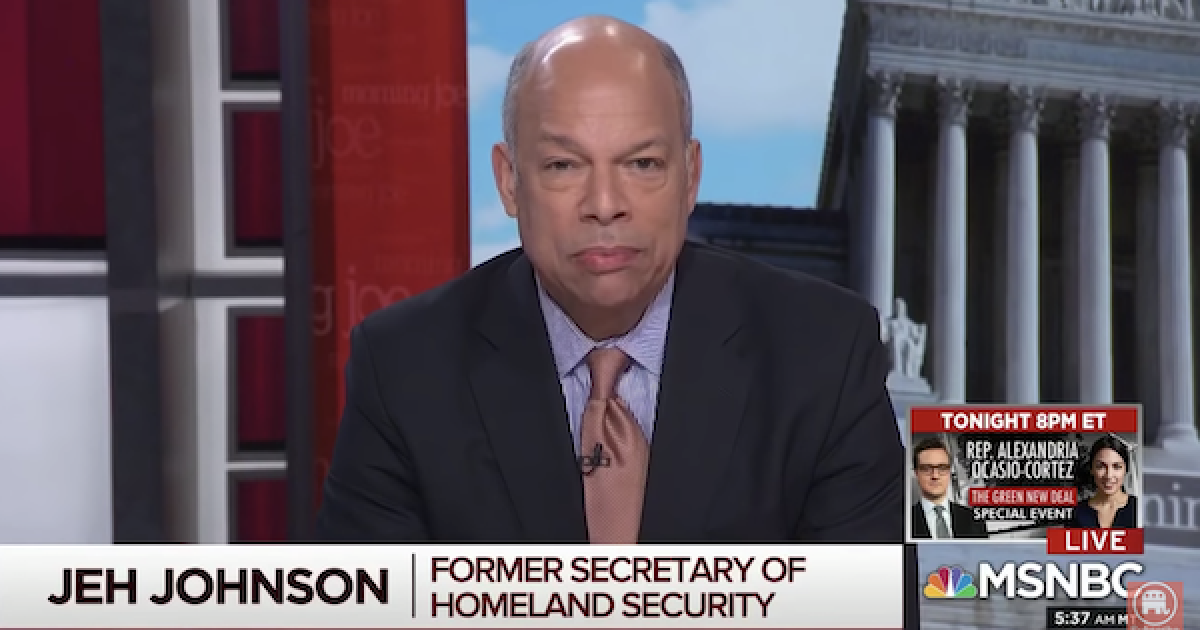 Obama’s DHS Secretary Jeh Johnson agrees with President Trump that ‘We are truly in a crisis‘ at the southern border.

“A little bit of context here. When I was in office in Kirstjen Nielsen’s job, at her desk, I’d get to work around 6:30 in the morning, and there would be my intelligence book sitting on my desk, the PDB, and also the apprehension numbers from the day before,” Johnson said during his appearance on MSNBC’s “Morning Joe.”

Yes, THAT Morning Joe, the former conservative who became liberal when he started sleeping with his married co-star.

“On Tuesday there were 4,000 apprehensions. I know that a thousand overwhelms the system. I can’t imagine what 4,000 a day looks like. So, we are truly in a crisis,” he continued.

I guess little Donny didn’t call Johnson a Nazi because it was Joe Scarborough’s turn to make an inappropriate Nazi reference. During the same show he said:

“Whenever people get overcharged and start talking about Donald Trump and say, you know, they’re all Nazis, I say no, no, no, no, come on, they’re not Nazis. But if they were Nazis, they’d be the ones from ‘Hogan’s Heroes, I mean, this is Colonel Klink action here.”

Can’t really blame Joe for saying stupid things about Trump.  His new wife Mika is an extreme liberal, and I bet if he doesn’t dump on the president he sleeps on the couch.

The Washington Examiner presented some fact that backed up Jeh Johnson

U.S. Border Patrol agents on the southwest border took more people into custody Monday than in any day in the past 10 years, U.S. Customs and Border Protection announced Tuesday.

TEN YEARS?  I think Joe Scarborough was still a conservative ten years ago.

CBP Chief Operating Officer John Sanders told attendees of the Border Security Expo this week a major reason for the recent surge in border apprehensions is due to large numbers of people illegally crossing together, rather than a handful at a time.

Sanders said CBP is on track to have taken 100,000 people into custody at the U.S.-Mexico border the month of March. More than one-third of that number is expected to be children.

Most of the Demoncrats are too stupid to know that there is genuinely a massive crisis at the border, but when you have a former Obama staff member saying that there is a crisis, you know that there is a real big crisis! The Liberal Congress members, especially the House under Nancy Pelosi’s control “refuse to recognize a disaster which is taking place” and it will put America on that “deathbed” if it isn’t stopped.