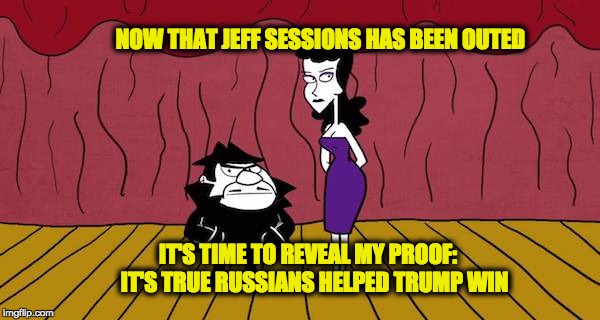 With the “outing” of Jeff Sessions’ two “meetings” with the Russian Ambassador by the Washington Post, it’s become clear that the liberal media will do anything, dig up any stone, use blow up any piece of news into a major scandal, in their efforts to take down the administration. I am now convinced that it’s time for me to talk, I need to fess up before I find myself on the cover of the Washington Post. Not only do I have proof that people who had contact with the Russians helped Donald Trump to win the presidency….well…I was involved and know other people who were involved.

The Sessions story is based on this exchange from his confirmation hearings:

Senator Franken: OK. CNN has just published a story and I’m telling you this about a news story that’s just been published. I’m not expecting you to know whether or not it’s true or not. But CNN just published a story alleging that the intelligence community provided documents to the president-elect last week that included information that quote, “Russian operatives claimed to have compromising personal and financial information about Mr. Trump.” These documents also allegedly say quote, “There was a continuing exchange of information during the campaign between Trump’s surrogates and intermediaries for the Russian government.” Now, again, I’m telling you this as it’s coming out, so you know. But if it’s true, it’s obviously extremely serious and if there is any evidence that anyone affiliated with the Trump campaign communicated with the Russian government in the course of this campaign, what will you do?

Senator Jeff Sessions: Senator Franken, I’m not aware of any of those activities. I have been called a surrogate at a time or two in that campaign and I didn’t have — did not have communications with the Russians, and I’m unable to comment on it.

There was absolutely nothing misleading about his answer. Last year, the Senator had over 25 conversations with foreign ambassadors as a senior member of the Armed Services Committee, including the British, Korean, Japanese, Polish, Indian, Chinese, Canadian, Australian, German and Russian ambassadors. He was asked during the hearing about communications between Russia and the Trump campaign–not about meetings he took as a senator and a member of the Armed Services Committee.

In his role as a senior member of the Senate Armed Services Committee he did have contact with the Russians twice. Once was at a Heritage Foundation party. Apparently Sessions spoke to a group of 50-plus ambassadors. When he was done speaking  a smaller group of ambassadors approached Sessions. One of the ambassador’s was the Representative. Sessions spoke to the group not individually.

The second encounter happened in Sessions’ office. As a member of the Armed Services Committee, sessions met with Ambassadors, Defense Dept. officials, and other officials from foreign governments on a daily basis, the discussions center on defense issues, relations between the two countries, and any positive or negative issues they were facing.

Again these discussions were all within the context of being a member of the Armed Services Committee, Al Franken asked about the Trump Campaign, and Sessions answered honestly. But that doesn’t really matter the liberal media is participating in the Democrat’s political witch hunt, they will try anything dig up any news no matter how insignificant, and use it to try to de-legitimize the Trump Administration.

As the liberal media is looking for any possible link between Russia and the Trump Campaign, I am motivated to provide my evidence before it becomes news.

All four of my grandparents were born in Russia and I voted for Donald Trump. It gets worse.  My Dad of blessed memory who died a week before election day had already voted in Florida. As dad also voted for Trump it means that at least two people of Russian background helped Donald Trump win the election. And that’s not all!

As many of you know last week I was in Washington, D.C. for CPAC, the Conservative Political Action Committee. The last night of CPAC I joined some friends at the hotel bar, there I saw a table of four CPAC attendees. I asked all four if they voted for Donald Trump and they all said that they had.  Just then I noticed what they were drinking, a mixture of Kahlúa and vodka topped with a layer of cream…that’s right all four were drinking White Russians.

Why didn’t I speak out about my dad and me? Why didn’t I mention the 4 Trump voters drinking white Russians? To be honest I didn’t think it was important or relevant. But since last night’s Washington Post story, and watching the Democratic Party leadership have a cow about the unimportant, irrelevant Jeff Sessions meetings, it is prudent for me to provide my story now just in case it come up.

You never know what will make the Democratic Party leadership have a freak-out. For example they are going wild about sessions, but not one of them called for AG Lynch’s resignation or a special prosecutor when she had a private meeting with former president Bubba Clinton just before Hillary Clinton got off the hook for her emails.

Well at least I have gotten the truth off my chest.  I hope my family’s votes or those of the CPAC drinkers do not do damage to President Trump, because you know those Democrats don’t really care about the people of this country, just care about getting themselves in power so they can “fill the swamp.”