JD Vance Will Be Another Mitt Romney 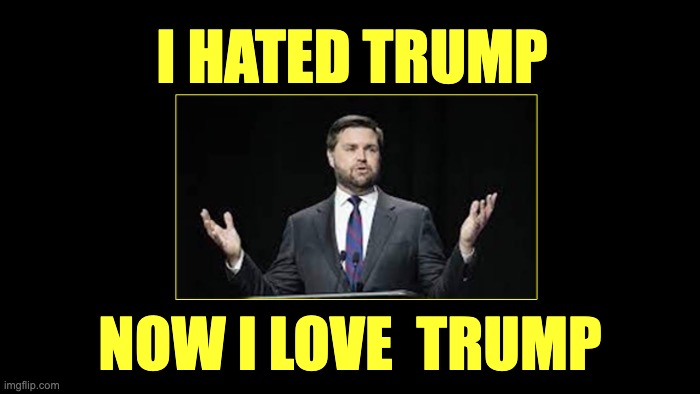 An Open Letter To The President We Love: President Trump

Just as Romney asked for your endorsement in Utah for senator then betrayed you, so apparently, JD Vance will do the same.

Projections are that Vance will be a thorn in your side from the moment he is elected if he is elected. Vance is lying about his record. He has always been a “Never Trumper,” and now that he needs your endorsement in Ohio, he has an amazing change and supports you and your ideas. For a few months…

“As a celebrity cultural conservative in 2016, Vance declared himself a “Never Trump guy” and mulled a vote for Hillary Clinton. As late as October of that year, he tweeted of his future lord and master: “My God, what an idiot.” ‘

So in his mind, you are not just an idiot, but “My God, what an idiot.”

Vance is slick and slimy like a snake… just listen to his carefully calculated lies. His statements ooze dishonesty. Snake is the right word. This article in NewsMax makes it clear. He views President Trump as… well, as his election pimp:

“Author and venture capitalist J.D. Vance, who former President Donald Trump has endorsed in Ohio’s GOP primary race for the Senate, said Tuesday on Newsmax that the backing is significant, as people still “really love” Trump and see his endorsement as a “mark of approval.”

However, the “Hillbilly Elegy” writer said on Newsmax’s “Wake Up America” that such endorsements don’t mean Trump is looking for someone who just repeats his slogans but that he “cares about substance” and wants “somebody with a plan to put America first.”

Vance continued: “Because we actually had substance, because we actually had ideas, we were able to earn the president’s support,” said Vance, who on Monday began a statewide ad campaign featuring the much-coveted Trump endorsement. “I think because of it, we’re going to win this race … President Trump said that you’re ‘our best chance for victory in what could be a very tough race.”

Vance does not describe what his ideas are. They are apparently similar to those of Liz Chaney and Mitt Romney. And the red flags about him would rise.

Our dear President Trump, the people in Utah, are groaning under the bondage of Mitt Romney. And it is sad to say that, after Romney lied to you about what he believed and what he would do, your endorsement put Romney in office.

Political analysts make it clear that the majority of Republican citizens of Utah do not like Mr. Romney. Actually, they hate him and are stuck with him for many years. The sad fact of the matter is that Romney deceived you. But once snakes become senators, it’s too late.

The idea that JD Vance, after being an isolationist and anti-Trumper for years, suddenly has a massive change when he needs your endorsement is the Mitt Romney scenario #2.

And President Trump, listen to what Vance has to say about the horrific genocide taking place in Ukraine:

On Bannon’s War Room podcast on the brink of the Russian invasion of Ukraine, Vance said, “I don’t really care what happens to Ukraine one way or another.”

Note that the information in this post is accurate to the best of our knowledge at the present time and represents an essential analysis of the future of America. This is political free speech.

Experts note that Vance flops in whatever ways will get him votes and your support. He is now flopping a bit on Ukraine after realizing his district has 80,000 Ukrainian origin residents and because polling numbers showed his closely held Ukraine ideas are backfiring. But once he’s elected, his Ukraine views, “I don’t really care what happens to Ukraine one way or another.” will surface, and there will be nothing anyone can do about it. He will be a thorn in your side every day if he is elected in the Ohio Republican Senate primary on May 3rd, with early voting underway now.

There are many other good candidates for the office of Senator from Ohio. And it’s no problem to change now. For example, former Ohio State Treasurer and combat veteran Josh Mandel. Better late than never.

Dr. Joel S Holmes is an engineer working in hydropower and also chemistry.