John Kerry Has Made A Career Of Violating Logan Act

The NY Times Story Is No Surprise 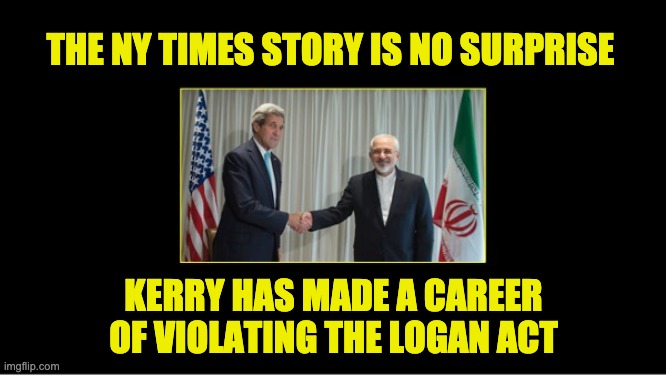 According to the NY Times, in 2018, while Donald Trump was president, former secretary of state John Kerry told Iranian Foreign Minister Javad Zarif about over 200 covert Israeli attacks on Iranian interests in Syria. The report comes from a leaked tape recording of comments Zarif made to an Iranian journalist last month obtained by the New York Times. Based on John Kerry’s history of violating the Logan Act, the NY Times report is not surprising.

In the history of the Logan Act, only two people were ever charged, and neither was convicted. If the Act was ever enforced, Kerry would be spending time in a federal penitentiary. John Kerry violated the Act many times during his political career.

During interviews to promote his book in Sept. 2018, Kerry told an interviewer that he met with Iranian Foreign Minister Javad Zarif three or four times since leaving office and that their talks touched on the international nuclear agreement which Kerry negotiated and President Trump killed ( because it was such a bad deal for America). This was the first time Kerry admitted a Logan Act violation. However, he had other offenses that he didn’t fess up to.

In May of 2018, the Boston Globe reported that Kerry went to the U.N. to meet with Iranian Foreign Minister Javad Zarif to discuss ways to save the Iran nuke deal. “It was the second time in about two months that the two had met to strategize over salvaging a deal they spent years negotiating during the Obama administration, according to a person briefed on the meetings.” The Globe also reported that  Kerry met with German President Frank-Walter Steinmeier, and he’s been on the phone with European Union official Federica Mogherini in an attempt to save the deal

In other words, he was actively trying to sabotage U.S. policy.  It wasn’t the first or only time.

Wow! Did Kerry have inside information on the deep state’s attempt to remove the duly elected Donald Trump from office? “Out of office within a year” certainly sounds like it.

During a September 14th, 2018, press conference  Secretary of State Pompeo was asked whether he thought Kerry’s Iran meetings violate the Logan Act. He refused to get into whether it was legal, but he certainly thought the meetings were very wrong.

I’ll leave the legal determinations to others. But what Secretary Kerry has done is unseemly and unprecedented. This is a former secretary of state engaged with the world’s largest state sponsor of terror, and according to him – right? You don’t have to take my word for it. He – these are his answers. He was talking to them. He was telling them to wait out this administration.

You can’t find precedent for this in U.S. history, and the secretary ought not – Secretary Kerry ought not to engage in that kind of behavior. It’s inconsistent with what foreign policy of the United States is, as directed by this President, and it is beyond inappropriate for him to be engaged in this. I remember, I saw him. I saw him in Munich at the Security Conference. He was there with – if I have my facts right, because I think I saw them all with my own eyes – Secretary Moniz and Wendy Sherman, the troika. And I am confident that they met with their troika counterparts, although one can perhaps ask Secretary Kerry if my recollection with respect to that is accurate.

I wasn’t in the meeting, but I am reasonably confident that he was not there in support of U.S. policy with respect to the Islamic Republic of Iran, who this week fired Katyusha rockets toward the United States embassy in Baghdad and took action against our consulate in Basra.

In 2018 Sen. Rubio sent a letter to then-Attorney General Jeff Sessions asking him to investigate Kerry’s meetings with Iranians for Logan Act violations. But Sessions “resigned” three weeks later. In May 2019, Marco Rubio sent a letter to AG William Barr, repeating the Florida Senator’s request made of his predecessor.  But nothing happened.

If there is an investigation, perhaps the DOJ will include the times John Kerry violated the Logan Act during other GOP administrations.

In 1985, Senator John Kerry traveled to Nicaragua for a friendly get-together with the Sandinista president, Daniel Ortega. The position of the Reagan administration was to support the opposition Contras. Kerry wasn’t much interested in the administration’s position. Upon returning to the United States, Kerry met with President Reagan to convey a message from Ortega. Reagan “wasn’t thrilled,” Kerry later told the New York Times.

Some say Senator Tom Cotton’s March 2015 open letter to the Iranian regime was an example of breaking the Logan Act. But the message wasn’t a negotiation. It didn’t even discuss possible terms of a deal. The Cotton letter signed by 47 Senators simply explained how the constitution worked and that any agreement that wasn’t ratified by the Senate could be overturned (which is precisely what happened). Ironically Kerry objected to the Tom Cotton letter, “During my 29 years here in the Senate, I have never heard of—nor even heard of it being proposed—anything comparable to this,” Kerry said. “If I had, I can guarantee that no matter who was president of what the issue was and no matter who the president was, I would have certainly rejected it.”

While I am not an attorney, nor have I ever played one on TV. It certainly seems as if John Kerry believes he can run his own free-lance foreign policy.  Even with the recent NY Times revelation, formal charges will never be brought up against the former Secretary of State/Fred Gwynn look-alike. It would be a waste of time.  In the 220 years since the Logan Act was signed into law, only two people were ever indicted on charges of violating the Act. Francis Flournoy in 1803 and Jonas P. Levy in 1852. Neither one was convicted.