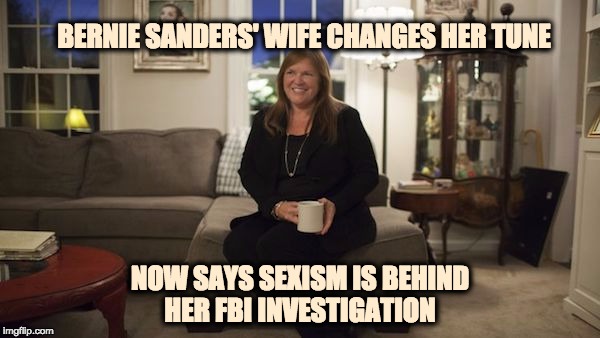 Last week it was a GOP plot, now Jane Sanders, says Brady Toensing, the person credited with getting the FBI to investigate her for bank fraud, did so for sexist reasons, but the timeline doesn’t quite work. While Toensing may have pushed the FBI to get involved, Sanders story had already been unraveling.

She told the Boston Globe:

“I find it incredibly sexist that basically he’s going after my husband by destroying my reputation, and that’s not OK,” she said in her first interview about the man responsible for an FBI probe that centers on her leadership at Burlington College, a small liberal arts school on Lake Champlain that she led from 2004 to 2011. The college closed last year as it struggled to pay its creditors and lost its accreditation.

As Vice-Chair of the state’s GOP, Toensing has a become well-known as someone who finds a legal attacks any liberal where he finds an opening.  His targets have included the former governor and attorney general (both men). His biggest target by far has been the Sanders family.

Jane Sanders’ troubles began with accusations of bank fraud being levied in her general direction after accounting discrepancies were detected in her work with a local Vermont college. She is accused of not being honest when she applied for the loan that sent the college off the fiscal cliff, Ms. Sanders claimed the college could count on $2.6 million in donations to pay for loan on the purchased land, according to the 2010 loan application. But in actuality she raised only $676,000 in donations over the next four years.

According to the Boston Globe report:

Toensing’s opposition research on Jane Sanders began in 2014, when the idea of Bernie Sanders’ eventual run for president made most Vermonters laugh. Late that summer, he approached a Vermont news outlet promising a juicy scoop. Jane Sanders had received a lucrative payout when she left the small, struggling college, he said.

A month later, attack ads appeared on local television that accused her of accepting a “golden parachute” from Burlington College even though her husband had criticized Wall Street executives for taking such payouts.

A little more than a year later, Toensing filed a complaint with the Vermont US attorney that requested an investigation into alleged bank fraud by Jane Sanders.

He accused the former college president of misleading a bank into financing the 2010 purchase of land to expand the Burlington campus. Jane Sanders, he said, had knowingly overstated the prospect of philanthropic pledges to obtain the loan.

According to the Globe until sometime in 2015, Toensing was attacking Sanders’ “golden parachute,” But the revelation about the possible misdeeds began to seep out in 2015.

Before Toensing changed his attack, in August 2014 the Burlington Free Press ran an investigative report spurred by  the New England Association of Schools and Colleges, which warned that Burlington College would lose its accreditation if it doesn’t resolve certain financial inadequacies. The paper began to unravel the Sanders story. It reported that some of the school’s financial problems were because it hadn’t received,  “$1,128,662 in “contributions receivable,” most of which comprised pledges due in future years, including an unrealized $1 million estate gift. Sanders had announced that gift in 2011, before she resigned.”

Apparently Ms. Sanders’ lied..at least according to one of the donors. Corinne Bove Maietta, a member of the famed Burlington Bove’s Restaurant family, said she agreed to give the college an unspecified amount upon her death. Documents show, however, that Sanders put her down for a series of cash payments while she was still alive and kicking.

In an interview with VTDigger.org, the blog that broke the story which broke the story about Jane Sanders being investigated, Corinne Maietta said she never agreed to make a series of payments to the college while she was alive, as Sanders claimed in documents provided to a bank. Maietta’s pledge and pledges from other donors were used as collateral for the loan

In an interview, Maietta was incredulous that Burlington College would try to use her bequest to secure a bank loan. “You can’t borrow money on the future,” she said. “That doesn’t exist.”

When she heard how her pledge was listed in the loan document, she was surprised. “They had me in increments? No, never,” Maietta said.

Maietta, who was interviewed by a federal investigator at her home in West Palm Beach, Florida, said she agreed to give the school donations in addition to the bequest. She said she gave less than $100,000.

Maietta was adamant that she never signed anything with the college, despite Sanders personally asking her to do so. She said she didn’t include Burlington College in her will until almost a year after the college purchased the diocese land.

So is Jane Sanders saying Corinne Maietta an 83-year-old registered Democrat is being sexist also?

And what of the Republicans? Until her interview with the Boston Globe, Jane Sanders claimed she was being wrongly because of a Republican plot.  Perhaps she finally realized that the FBI investigation began when Barack Obama was president.  Whose Next Jane Sanders?

It is interesting that in the entire Boston Globe article one word isn’t mentioned….innocent.