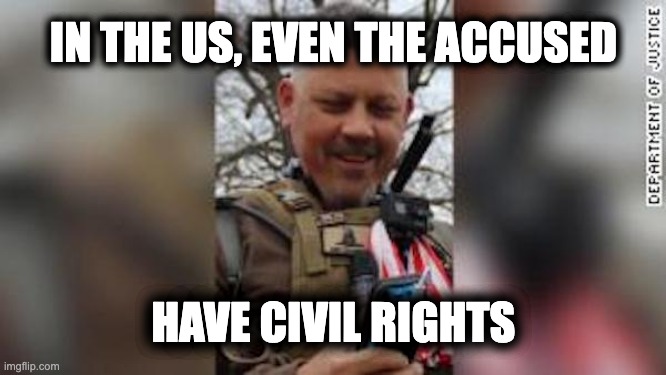 It’s almost impossible to mention the events of Jan. 6 without some sycophant of the left mentioning the word ‘insurrection.’ Jan 6th defendant civil rights

But facts are stubborn things. For one thing, not one of the charging documents uses the word ‘insurrection’ because the Feds themselves do not consider the events of that day to have been an insurrection. ‘SCANT EVIDENCE’: New Report From FBI Blows Left’s ‘Insurrection’ Narrative Straight To Hell

But the word ‘insurrection’ sounds scary and carries a lot of baggage with it, so Dems and their media surrogates will insist on using it to push a narrative.

When they aren’t calling it an ‘insurrection,’ they speak in shrill alarming tones or hushed somber tones that this has been the greatest threat to American democracy since [insert overheated rhetoric here].

But there’s a problem with THAT language too. There was no real threat to democracy. Many of the worst things claimed have been debunked — the ‘murder’ of Officer Sicknick, for example, or the allegation that zip ties were brought in to take hostages. (The zip ties were accidentally left behind by authorities and picked up by a responsible American who didn’t want them falling into the hands of some wingnut.)

If anything, the greatest threat to democracy seems to involved the Government’s treatment of the accused themselves.

A federal judge on Wednesday held top officials at the Washington, D.C., Department of Corrections in civil contempt, after ruling they violated the civil rights of a U.S. Capitol riot defendant by impeding his access to medical care.

“I find that the civil rights of the defendant have been abridged. I don’t know if it’s because he is a Jan. 6 defendant or not, but I find that this matter should be referred to the attorney general of the United States … for a civil rights investigation.”

Lamberth’s verbal and written order came during a court hearing on Wednesday, after the judge previously threatened to hold District of Columbia Department of Corrections Director Quincy Booth and Warden Wanda Patten in contempt for failing to turn over notes from a doctor for defendant Christopher Worrell.

How specifically did they abridge his rights? He has Non-Hodgkin’s lymphoma (a form of cancer) and broke his hand while in custody in May. In June, a specialist recommended surgery to repair the damage. It’s now October, and he STILL hasn’t received treatment. There’s just one thing standing between him and the surgery he needs — the Department Of Corrections has not provided the doctor’s notes to the U.S. Marshals Service… without that paperwork, the Marshals cannot approve the surgery.

Before Worrell broke his hand, his then-attorney argued in court that he had not had adequate access to medical treatment for his cancer. His new attorney, Alex Stavrou, told Reuters his client was found unconscious with the broken hand on May 16, after what appeared to be a fall possibly tied to his other medical conditions.

“We support the judge’s position that the Office of the Attorney General investigate into potential civil rights violations,” he told Reuters in a statement, adding that Worrell and other Jan. 6 defendants hope Attorney General Merrick Garland will “conduct this inquiry immediately and without prejudice [of course if he does condut the inquiry without prejudice it will be a first for Garland as AG].

The way the Jan. 6 defendants are treated is not how accused people are supposed to be treated in the United States. That sounds more like the way they treat people in the CCP or in a Russian gulag. It’s more proof the Democrats are angling for a repressive socialist government.