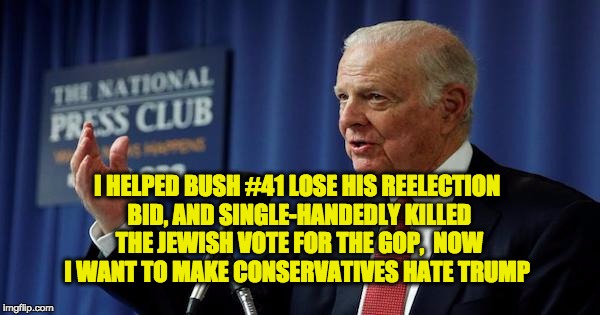 Before George H.W. Bush was president, Republicans could count on around 40% of the Jewish vote. But thanks to his anti-Semitic Secretary of State James Baker who was quoted by author John Loftus as saying, “F**k the Jews, they won’t vote for us anyway,” the GOP Jewish vote fell to 11% when Bush #41 ran fore reelection and while it has been inching up since then it still hasn’t reached the 38-40% of the Reagan years and the first Bush #41 election.

Apparently Baker isn’t satisfied with screwing up the Jewish vote for the Republicans, now he wants to drive away the Republicans who would object to any new tax, especially a carbon tax based own the suspect global warming hypothesis. Along with  Bush #43’s Treasury Secretary Hank Paulson, James Baker who was Reagan’s Treasury Secretary before he ran State for Bush #41, is trying to convince the Trump administration to push through a carbon tax.

“Climate change poses an unacceptable risk to our climate and to our economy,” Paulson said in a statement. “Putting a price on carbon is by far the most efficient and effective way to restrict emissions.”

Even Baker said that he is “somewhat of a skeptic about the extent to which man is responsible for climate change,” but that the “risks are too great to ignore.”

Perhaps before he calls for a Carbon Tax, Baker should put down his copy of the anti-Semitic classic, “Protocols of the Elders of Zion” and read my recent post about NOAA fudging the climate information to make it seem like the global warming pause that existed since 1998 never happened, or maybe the article about how the study that introduced the claim that 97% of scientists agree with the manmade global warming hypothesis was faked, or even all the scientists who believe that the low sunspot cycle that is just beginning will throw us into a mini-ice age.

Mitt Romney tweeted out that this carbon tax idea is a “thought-provoking plan from highly respected conservatives to both strengthen the economy and confront climate risks.”
Mitt? You lost! The only think you delivered for conservatives was four more years of Obama. Please shut up before you and Baker make Trump a one term president.

Part of the idea is that this carbon tax would replace a slew of environmental regulations. According to Bloomberg:

The blueprint involves a $40 tax on every metric ton of carbon dioxide released by burning fossil fuels, with the price climbing over time. To avoid an undue burden on the poor from the higher energy bills that would result, the projected $200 billion to $300 billion in annual revenue would be redistributed to households in the form of quarterly checks from the Social Security Administration. Families of four would see an average annual payout of $2,000 under the plan.

The proposal also calls for border adjustments that would act to hike the costs of products imported from countries that do not put a price on carbon.

Martin Feldstein, who headed former President Ronald Reagan’s Council of Economic Advisers, said the tax would be imposed at the point fossil fuels enter the economy, such as when oil leaves the refinery or coal leaves the mine. “The tax at the source is then built-in to the prices of the products made from that raw material,” Feldstein said.

Some members of this group – who have called themselves the Climate Leadership Council – have expressed skepticism that a carbon tax would go over well with this administration. Even if there are a few Republicans in the House and Senate who’d be for a carbon tax, it would be too damaging in this current political climate (no pun intended) to advocate for such a tax.

And why would anyone trust Baker not only did he kill the Jewish vote for the GOP but at the end of the Bush #41 White House he became Chief of Staff. In that position  Baker used his political sense to help Bush #41. Oh wait…maybe not.