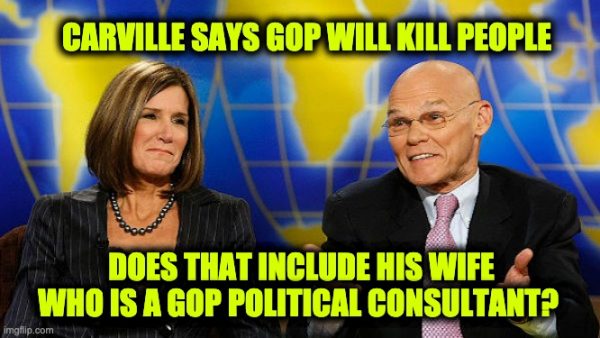 While appearing on MSNBC, the official network of insane liberal hate, rage, stupidity, and lying propaganda, Bill Clinton’s 1992 presidential campaign James Carville, the Ragin Cajun told “The 11th Hour” hosted by Brian Williams that Republicans will do anything to stay in power — even kill people. James Carville Mary Matlin

Really? Did Carville learn that from his wife Republican political Consultant Mary Matalin?

He made a comment regarding news that the GOP-led legislature refused to postpone the Wisconsin primary during the coronavirus pandemic.

“We’ve got to be careful about is mucking around with voting. They’re going to try it. Trump, all the Republicans admit it, we can’t win if everybody votes. So my kind of mission here in the short term is to sound the alarm to say Mitch McConnell and the supreme court, they’re going to do everything they can to hold on to power,” he said, failing to back up his outrageous and false claim.

“Speaker Pelosi and Schumer, we’ve got to dig in and make sure states have funding to conduct these elections and to put pressure on them to make sure they’re done fairly. This thing in Wisconsin was one of the most awful things I’ve ever seen in my life. Just the extent they’ll go to hold on to power. It was all about one Supreme Court seat in Wisconsin. They will kill people to stay in power, literally,” he added.

Will his wife, who was campaign director for George H. W. Bush, was an assistant to President George W. Bush and counselor to Vice President Dick Cheney be on top of a building with a sniper rifle picking of democrats, literally?

Of course not! I don’t believe either party wants people to die.

That’s typical liberal hyperbolic rhetoric. When a Republican disagrees with a liberal, their reaction is the Republican is a racist, hates women, wants dirty water or air, or wants people to die.  They respond that way because they don’t have the mental capacity to give a rational response,

To be honest, I don’t understand why Carville was so cranky. He should have been celebrating. Last month he was warning his party about voting for Bernie Sanders, who dropped out earlier that day.

In a related issue, there is no truth to the rumor that 11th Hour host Brian Williams claimed to have a cure for COVID-19. But based on his history, he may have said, however, that he invented the coronavirus rapid testing while being fired on from a helicopter.