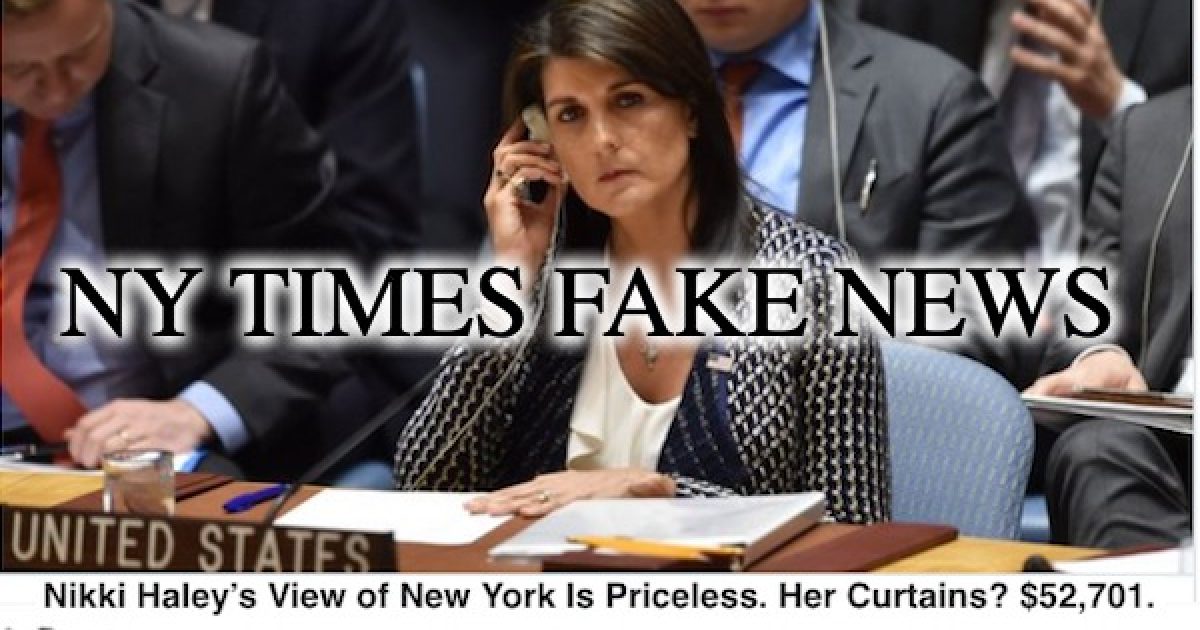 Jake Tapper
A story published by The New York Times accused U.S. ambassador to the U.N. Nikki Haley of spending $52,701 on curtains for the U.N. Ambassador’s official residence. But the truth is the spending plan was set in place at the end of the Obama era and well before Haley was appointed to the U.N. office.

On Friday morning, the so-called “paper of record” tweeted out the harsh accusation.

Based on the headline and the lede one would think that Haley was about to be in deep liberal created doo-doo. Reading the beginning of the article one would never believe that this expenditure was paid for and ordered during the Obama administration. Well, start believing!

Buried in its sixth paragraph, the NY Times notes, “A spokesman for Ms. Haley said plans to buy the curtains were made in 2016, during the Obama administration. Ms. Haley had no say in the purchase, he said.”

Jake Tapper investigated the story some more and explained it is not just a matter of the spokesman making an excuse Tapper independently reported that the “meme” of an outrageous price tag for curtains is not a story that can be hung on Haley.

Tapper Tweeted that the story was a “false meme.” The CNN host went on to explain what really happened.

Elaborating, a source at the US Mission to the UN tells CNN: “It was decided, well before the election in 2016, that the US Ambassador’s residence would move from the Waldorf to its new location. The new location was unfurnished/unfinished. In June of 2016, it was decided that the State Department’s Bureau of Overseas Buildings Operations would outfit the new residence (this is a standard operating procedure for Ambassadors’ residences across the globe). In July of 2016, the first site visit was complete, and the designer from OBO chose and ordered the curtains shortly thereafter (summer 2016). Also, SOP OBO does not personalize residences to individual Ambassador’s tastes.”

In other words, no matter who the new U.N. Ambassador was going to be, they would be living in this new residence with these new curtains. If there is someone to be blamed start with the former Secretary of State, John, “Why the Long Face” Kerry. 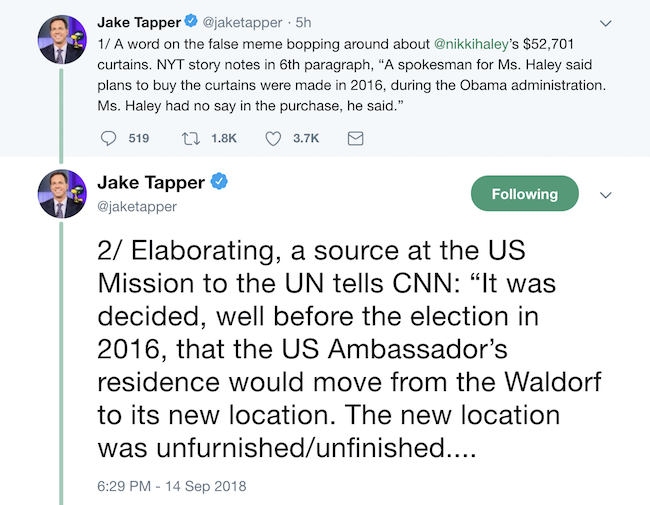 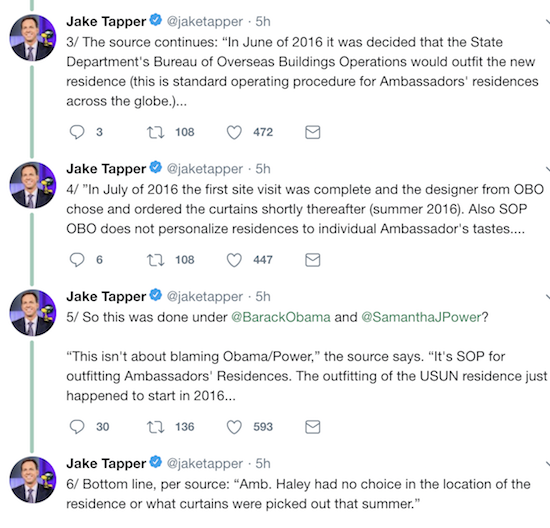 Perhaps because they were outed by Jake Tapper, the NY Times admitted their screw up, at least online:

Like many conservative observers, I believe that much of what CNN reports is fake news. There is one exception IMHO, while I do not always agree with him, Jake Tapper tries to play it down the middle.  The above is just one more example.

While Jake Tapper wasn’t fooled by the NY Times story, David Hogg, the far-left anti-gun teen demagogue once dubbed the “king of the snowflakes” on Twitter was fooled and then destroyed on twitter for his idiocy.  My friend Joe Newby has that story at Conservative Firing Line. Don’t miss it.

Note: Parts of this post were originally seen at Eagle Rising