And a database with details of each gun owner available to public. 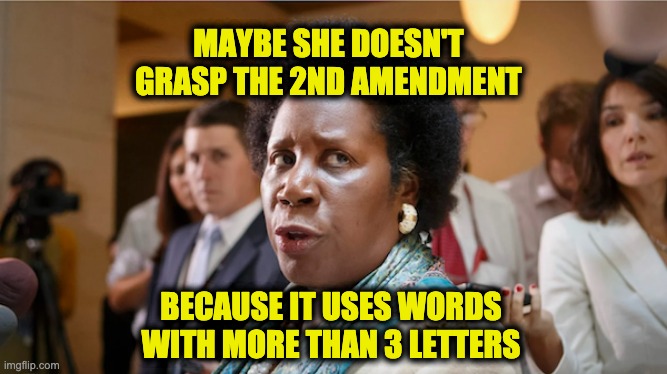 “The Sabika Sheikh Firearm Licensing and Registration Act,” HR 127, seeks to register and create a license for ALL guns and ammunition in the United States. Introduced on January 4 by Sheila Jackson Lee (D-TX), the blatantly unconstitutional bill’s text was updated on January 28.  But the Democrats don’t care, and neither does the bill’s sponsor Sheila Jackson Lee, whose I.Q. is so low she couldn’t spell gun if you spot her the “g” and the “u.” Jackson Lee gun control

Maybe Rep. Lee isn’t trying to overturn the Second Amendment. Perhaps the text uses too many big words for her to understand. That means the Sabika Sheikh Firearm Licensing and Registration Act won’t improve people’s opinion of the Congresswoman’s brainpower.

The bill’s text includes a system where each firearm and ammo purchase is licensed and the buyer registered. The information from those will be used to create a database to be shared with…well…everybody:

The Attorney General shall make the contents of the database accessible to all members of the public, all Federal, State, and local law enforcement authorities, all branches of the United States Armed Forces, and all State and local governments, as defined by the Bureau.

In other words, she wants to doxx every single legal firearm owner in America. If the database is available to all members of the public, it will open up all gun owners to harassment and violence from the cancel culture and crazy people like Sheila Jackson Lee.

But that isn’t the only horrible part of the Houston Congresswoman’s rampage against the Constitution.  HR 127 requires that to obtain a “license” to own a firearm/ammunition, you must pass a psych evaluation. No, this is not satire. The woman who acts as if she donated her brain to science but forgot to tell them to wait until she died wants others to get a psych exam.

That whole “shall not be infringed” thing keeps getting attacked by the leftist Democrats.

Just as dangerous — and unlikely to pass a court challenge, but with SCOTUS’ unwillingness to take up Second Amendment cases, who knows — are the other provisions about licensing. Under this bill, you would have to be 21, pass a background check, pass a psychological examination and have liability insurance — which would cost $800. You would even have to have a license to display an antique firearm. There’s even a separate license for owning a “military-style firearm,” that would require jumping through even more hoops.

Perhaps most frightening are the requirements for the psych eval.“

2) PSYCHOLOGICAL EVALUATION.—A psychological evaluation is conducted in accordance with this paragraph if—

“(A) the evaluation is conducted in compliance with such standards as shall be established by the Attorney General;

“(B) the evaluation is conducted by a licensed psychologist approved by the Attorney General;

“(C) as deemed necessary by the licensed psychologist involved, the evaluation included a psychological evaluation of other members of the household in which the individual resides; and

Having Sheila Jackson Lee write a bill requiring Americans to pass a psych exam is as smart as having John Wayne Gacy babysit your sons. We are talking about a woman who needs to see a therapist for her extreme lack of anger management.

She is known as one of the meanest people in Congress. In March 2011, the Daily Caller reported about Jackson Lee’s management skills, and it wasn’t pretty.” The report said the Texas progressive may be the most demanding insensitive boss on Capitol Hill, a building known for nasty bosses.

Rep. Sheila Jackson Lee of Texas also hands out nicknames to the people who work for her. The Houston Democrat addressed one of her employees as “you stupid motherf**ker.” And not just once, but “constantly,” recalls the staffer, “like, all the time.”

(…)Another Jackson Lee aide recounts the time her parents came to Washington to visit: “They were really excited to come to the congressional office. They’re small town people, so for them it was a huge deal. They were actually sitting in the main lobby waiting area….[Jackson Lee] came out screaming at me over a scheduling change. Called me a ’stupid idiot. Don’t be a moron, you foolish girl’ and actually did this in front of my parents, of all things.”

People I’ve spoken to who work on capitol hill tell me that Rep Jackson Lee is the nastiest person in Congress. This was confirmed by the Washingtonian magazine, which named her the meanest Democrat Congress member on at least two occasions because of her erratic and abusive behavior in the workplace”   LegiStorm, an on-line site that tracks the Capitol Hill workforce in detail, reported that between 2001 and 2016 the office of Rep. Sheila Jackson Lee had the highest turnover in the House, averaging 62 percent a year.

Based on these and the many other stories of Shelia Jackson Lee’s behavior in Congress, it’s not firearms owners who should have a psychological evaluation. Still, it’s the Congresswoman from Houston, Texas, who needs the check-up from the neck-up, and her personal details should be shared with the public, not those of firearms owners.