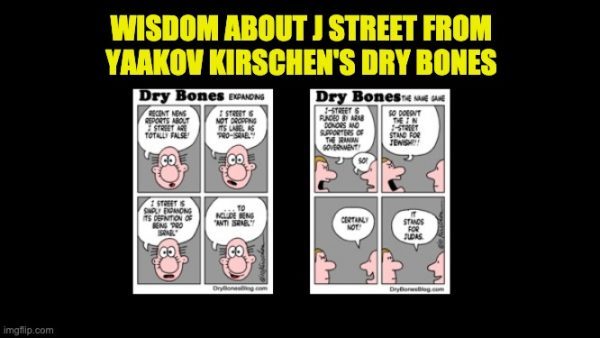 J Street, founded in 2008, markets itself as a kind of left-wing AIPAC. From its very beginning, the group goes out of its way to emphasize its motto of “pro-Israel, pro-peace. The motto is a lie. To quote Professor Alan Dershowitz J Street is “neither pro-Israel nor pro-peace.”

With its latest affront to Israel, in a mid-November email appeal, J Street quoted an unnamed “top EU diplomat” in its tirade against an Israeli government call for bids for new homes in a nearly 30-year-old Jerusalem neighborhood where Ethiopian Jewish and Russian immigrants live. What’s more than J Street’s vitriol against the construction of Jewish homes is that the name of the EU functionary was intentionally left off of J Street’s rant because he is an anti-Israel extremist earlier this year, gave outright support for terrorists. Israel’s Foreign Ministry reported that he urged that Palestinian Arabs affiliated with blacklisted terror groups remain eligible to participate in projects funded by the EU.

J Street is the  Washington, D.C., based “Jewish” faux Zionist groups created specifically to attack the Jewish State.  It was founded with seed money from George Soros; J Street had minimal legitimacy in the Jewish Community but was promoted by Barack Obama as an important organization because it supported his anti-Israel positions.

As a central theme of its propaganda, J Street maintains that Jews do not have a right to live wherever they choose and must be transferred out of their homes and neighborhoods in Judea-Samaria, where Israeli citizens have lived for nearly 50 years and before the Roman exile for nearly one thousand years.

The EU bureaucrat quoted by J Street, who opposes Jewish homes in Givat Hamatos, is a German named Sven Kühn von Burgsdorff.  Von Burgsdorff previously was the head of the EU’s delegation to South Sudan, and on May 8, 2020, in an article published in the liberal JTA, he was identified as heading the “EU mission to the West Bank and Gaza Strip.”

The Times of Israel reported on May 7, 2020, that an Israeli Foreign Ministry official stated that von Burgsdorff violated all of Israel’s agreements with the European Union when with his letter, assuring the Palestinians that membership in or affinity to a terrorist organization does not automatically prevent a person from being eligible to participate in EU-funded programs. The Times added that explicitly due to von Burgsdorff’s letter, Israeli Foreign Minister Israel Katz harshly rebuked the EU saying, “We demand that the EU immediately end all support, financial or otherwise, for any entities that support terrorism whether directly or indirectly.”

Debra Shushan, J Street’s Director of Government Affairs, issued an email titled “BREAKING: Outrageous steps by Netanyahu to expand settlements.” In the email, J Street made the wild claim that “this week the Netanyahu government announced it will begin the tender process for the major new settlement of Givat Hamatos — a move which a top EU diplomat branded a “de facto annexation attempt.” Construction in Givat Hamatos is part of a deliberate settlement movement strategy to cut off Palestinian neighborhoods of East Jerusalem from the West Bank Palestinian city of Bethlehem.”

The reason why J Street’s Shushan left out von Burgsdorff’s name should be clear: he has been widely discredited as a supporter of anti-Israel terrorism.

Another issue with J Street’s email that must be confronted is the use of a place named “East Jerusalem” when no such place has ever existed in history. The name “East Jerusalem” is an artificial construct that supporters of the Arab use in their propaganda to make it appear as if that part of the city is an intrinsically Arab area that Jews are illegally entering. The truth is there are Jewish neighborhoods throughout the eastern, western, northern, and southern parts of Jerusalem. It’s a shameful thing when Jewish organizations choose to use such geographically inaccurate and politically loaded language. At the time, anti-Israel extremists created the name “East Jerusalem” for one reason: they sought to rip Israel’s capital apart to defeat Israel. They are really saying with the term ” East Jerusalem” that Jerusalem’s Old City and its surrounding neighborhoods are not part of Israel or part of Israeli Jerusalem itself. The original and oldest parts of Jerusalem are what they falsely label “East Jerusalem.”

The Middle East’s political climate has changed remarkably in the last several years, and J Street doesn’t seem to like it at all. The United Arab Emirates has two synagogues, and yet if J Street got their way, synagogues in Judea and Samaria would be dismantled, and the Jews in these neighborhoods would be forced from their homes. Haven’t we had enough of Jews being told where they can and cannot live? What was gained by the Israeli government destroying Jewish homes and synagogues in Gush Katif in Gaza in 2005 to hand over Israeli held land in the name of a “peace” that never came about? The Judean Hills, since the times of antiquity considered to be the heart of the Land of Israel, should, especially, be an area where Jewish families feel secure in the idea that their homes will never be destroyed.

J Street, founded in 2008, markets itself as a kind of left-wing AIPAC. From the very beginning, the group went out of its way to emphasize its motto of “pro-Israel, pro-peace.” The fake motto is pushed to shape public opinion about the Israeli-Arab conflict. A conflict that Harvard Professor Ruth Wisse describes as a partial fiction:

The anti-Israel positions taken by J-Street have included:

For a full understanding of J Street, I urge you to watch the full documentary “The J-Street Challenge,”  which is embedded below.”

Moshe Phillips is the national director of Herut North America’s U.S. division; Herut is an international movement for Zionist pride and education and is dedicated to the ideals of pre-World War Two Zionist leader Ze’ev Jabotinsky. Jeff Dunetz (The Lid) is an active member of Herut. You can learn more about Herut and join him as a member of this important part of the Zionist movement Herut, at https://herutna.org/

Development Of A “Digital Passport” For International Travel That Will Show If You Have Been Vaccinated
November 25th, 2020 Sons of Liberty Media

BADASS: Colorado GOP Congresswoman-Elect Wants To Carry Her Gun In The Capitol
November 25th, 2020 Clash Daily
Thanks for sharing!
We invite you to become a Lid insider. Sign up for our free email newsletter, and we'll make sure to keep you in the loop.
Send this to a friend