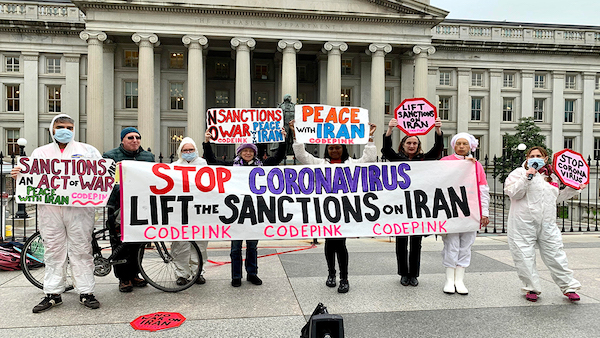 Herut, a leading American Zionist organization has condemned J Street’s decision to partner with CODEPINK and other anti-Israel extremist organizations in a call for the immediate end to U.S. sanctions against Iran. J Street moral-blindness

“We condemn this flagrant display of moral-blindness by J Street. This is a time of increased Antisemitism throughout the Islamic world and especially in Iran. Israel’s enemies are working to spread dark conspiracy theories blaming Israel for the spread of Coronavirus and this incitement is on daily display in the Middle East. For that reason alone it is shameful that J Street would elect to partner with CODEPINK,” said Karma Feinstein Cohen, the Executive Director of Herut North America.

On March 20, J Street was the only Jewish organization to sign a letter using the Covid-19 crisis as an excuse to pressure President Trump and members of his Cabinet to forget about the existential threat Iran poses to Israel and the region on its own and through its proxy terrorist armies. J Street’s letter said in part that it calls for “suspending many of the sanctions imposed by your administration since May 2018 for a period of at least 120 days, including those sanctions affecting Iran’s financial and oil sectors and its civilian industries.” [The letter can be found here].

Covid-19 gives J Street to return to its pro-Iran stance. In 2009 as America was about to increase sanctions on Iran because of its refusal to cooperate regarding its nuclear program, J Street sent out a mass e-mail opposing a bipartisan push in Congress for tougher sanctions on Iran.

“J Street, the controversial Washington, D.C. based Jewish pressure group, was created by George Soros specifically, and almost exclusively, to lobby for an independent Palestinian state, and has since morphed into being the “go-to” organization when Israel’s harshest critics need a Jewish organization to partner with and make their radical projects and statements appear kosher,” said Herut North America’s National Director Moshe Phillips.

Before the J Street / CODEPINK letter was distributed Foreign Policy reported that members of the Iranian regime were blaming Israel for Coronavirus calling it a “Zionist biological terrorist attack.” [Source]

The next day, after J Street’s letter with CODEPINK, was issued CODEPINK’s National Co-Director, Ariel Gold, tweeted “Israel is culpable for every coronavirus death in Gaza.”

“If J Street continues on this trajectory of forging alliances with Israel-bashers, American Jewish leaders will be forced to evaluate what place J Street is entitled to in the organized Jewish community if any at all,” said Herut’s Moshe Phillips. “As far back as 2013 the ADL listed CODEPINK in its report on the “top ten anti-Israel groups in the U.S.” and Street should have known better than to cosign any letter with CODEPINK and its allies–many of whom are just as infamous for their Israel hate. Perhaps some at J Street may have realized that they crossed a line here; as of now J Street makes no reference to the letter on the consistently updated press release page on their website.”

While officially they claim to support Israel, at J Street’s 2010 national conference, J Street co-founder Daniel Levy called Israel’s rebirth in 1948 “an act that was wrong.” J Street’s Advisory Council member Marcia Freedman told the 2015 J Street conference  Israelis should not have a state, instead Jews should be “protected minority” in an Arab-majority country.  The 2017 president of the J Street U student group sent a letter to Congress saying it was unfair to label as anti-Semites those who oppose Israel’s existence. Both Pope Francis and President Trump believe opposition to the existence of a Jewish state is anti-Semitic.

J Street’s claim they oppose BDS is a lie. Their conferences have featured and honored leading advocates of anti-Israel and the anti-Semitic BDS movement. For example, in 2016, a J Street press release urged the U.S. government to fight against what they call settlements by not allowing products to be labeled as “made in Israel” if they are produced in Judea or Samaria. The same press released urged a review of the tax-exempt status of groups that advance settlement expansion.

At past conferences, J Street gave platforms to top BDS promoters, such as Mustafa Barghouti, Rebecca Vilkomerson, and Michael Sfard.

J Street has argued that Israel does not need to be recognized as a Jewish State. J Street’s Vice President for Communications and New Media Isaac Luria opined in 2010 that peace is possible without the Palestinians recognizing Israel as a Jewish State. “Israel’s Jewish character is a matter of self-identification, and it does not matter whether the Palestinians – or anyone else for that matter – recognize it as such.”  That comment and others like it ignores the Palestinian stated goal of resettling any Arab claiming to be a refugee within Israel proper.  According to the UN, there are only 30K of the original refugees left, but they also give refugee status to those 30K’s children, in-laws, first cousins once removed, etc. In that way, Israel can be flooded with 5+ million “refugees” who can vote Israel’s Jewishness out of existence.

Herut is an international movement for Zionist pride and education and is dedicated to the ideals of pre-World War Two Zionist leader Ze’ev Jabotinsky, Jeff Dunetz: The Lid is an active supporter of Herut. More about Herut can be found at www.HerutNA.org