Follow-up:Itamar Terrorism Butchered an Israeli Family: An Interview With a First Responder

Edi: I’m a paramedic in the army. My base is located 10 minutes from Itamar. So, Friday night, approx. 1:00 AM, I get a call that there has been a terrorist penetration in Itamar and I should come there because there are wounded. There’s a special code in the army, it was used and it meant someone’s in the village in Itamar and there’s a terrorist attack right this moment. So I take my crew, me, another medic and our driver, and we take the ambulance to Itamar. 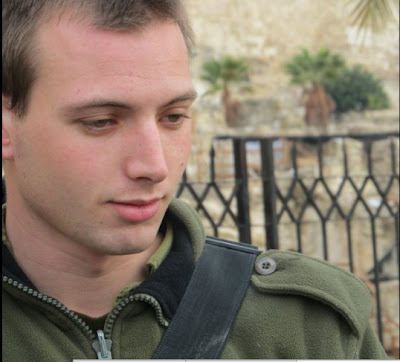 When we reached the house, we were careful, of course, because we weren’t sure whether the terrorists were still in the house or not. There could be a situation. So we entered the house carefully – gun first and all that – and we made sure no one is there, and then we tended to the wounded.

At the far end of the first room I see a frail little child lying on the carpet with three stab wounds in his chest. I leave my medic there to attend to him, because I thought he was still alive. Later we realized he was not. So I left the medic there; he was the first one we saw.

Second room, a child about 4 years of age lying on his bed – butchered is the best way to describe it. I guess you saw the pictures. A very grotesque, very unpleasant sight. The whole floor was blood. I go into the third room and I see the mother lying on the floor in her own blood with multiple stab wounds. She seemed dead on sight. I checked for bleeding, but nothing.

On the bed in the same room there’s the father. Again – dead on sight, no bleeding. Single stab wound near his neck. The third, the baby, she was found kind of underneath the father. At first I saw it and didn’t realize what it was. Kind of wrapped up in a blanket but it didn’t look like one. I turned her over and realized it was a baby.

Q: Was the father trying to protect the baby?

A: Seemed like the baby was behind the father. She was dead with one stab wound to her skull. So these are the five patients I saw. I come back to the first room and the first boy, when I tried to help him I saw he was dead as well. Carpet was full of blood; there was no movement or breathing. I reported back, said there were five casualties and there was nothing we could do for them, they were butchered.

Q: Can you tell us a little bit about what that was like for you, in personal terms?

A: It was different in professional and personal terms. In professional terms, it was very upsetting and frustrating that as a paramedic, I help so many people, but there’s nothing I can do for an entire family who are right before my eyes. On personal terms… the first thought that came to mind is that I have a little sister, not much older – she’s five – it was kind of hard for me. You know, I’ve seen terrorist attacks and bombings and all sorts of things. But it’s different. When you have a suicide bombing, you blow up next to a dozen people, there’s nothing personal about it. But stabbing three kids to death is very personal. And the people who did it, they have ideologies and stuff, I get that. But to stab three children to death – it’s incomprehensible. You can’t understand it, how someone could do something like that. That’s the thing that bothered me most. How can you—? When you hold a little child, it doesn’t matter who he is. And they didn’t stab to injure, they stabbed with mass brutality – again and again and again until they were dead.

Q: Sorry for asking such a dispassionate question, but do you have any idea how much time it would take – if they could have responded earlier?

A: I’ll tell you what. The murder probably occurred – first thing, are you asking how the murder was discovered? Itamar, being a religious settlement, Friday night is a bad time. They were dead approximately half an hour before I arrived there; about seven minutes before they were discovered. I don’t think there’s anything we could have done. The easiest solution is to close up all the Palestinian villages and say ‘no, you’re not going out’ – but we can’t do that, because we’re humanitarian. Me, as a paramedic, I mean this is why I chose to become one in the IDF – because we’re humanitarian. So this is my opinion. We couldn’t do anything for these people.

Q: To what degree is it difficult for you, after being present at such a carnage scene caused by a Palestinian, to treat Palestinians?

A: The next time I had to treat Palestinians was a day after that. And you know who I got to treat? One of the people they captured as a suspect for the attack. He was maybe part of the plan, something like that. But the only thing you can do is be as detached and professional as you can be. You don’t think about what he might do in the future or what he did in the past. Because if you do that you’re in the wrong business. And I treated him and he survived.

Q: Have you been in contact with any of the relatives to the murdered family?

A: My medic, the guy who was with me, wanted to go to the funeral. We thought it would be in Itamar. Eventually it was in Jerusalem and we couldn’t leave the area since we’re stationed here. The next day we came over with the ambulance to see the house – part of a routine tour. We saw some people there and people came and talked to us. It’s such a small place; a settlement with no more than 100-200 people. Everybody knows everybody. I know people there. We talked to them, it was difficult but we did.

Q: Can you tell us about other experiences you’ve had as a paramedic?

A: I tell you what, my job, as a paramedic, is the best I could have chosen. I believe, and I’m sorry because now I’m giving you all my ideology, but I believe we’re a very humanitarian army, because when we have a severely injured Palestinian citizen or even a terrorist, I will treat them the best I can and I get full backing. If I need a helicopter I’ll get one, and if I need a trauma surgeon I’ll get one. The only thing you focus on is the job, on saving lives. You don’t concentrate on who you’ll save, only how.

Q: Did you have any events when you had to take care of Palestinians?

A: A few weeks ago there was a major car accident – simply a car accident between two vehicles, both cars with Palestinians inside. We came there and started doing our job. Eventually – remember I told you I can get all the backup when I need it? – I decided the patient needed a helicopter now, and I got it 10 minutes later, which is the soonest I could physically get it. The patient went to Beilinson Hospital and recovered. We treat them all, guys. The West Bank – you have Israeli and Palestinian people. We believe that each and every one of them deserves the same standard of care. This is what we give to everyone. No matter if it’s an Israeli, Palestinian, or a foreign citizen. We give the same care to everyone.

Ivanka Trump Pushes Her Daddy’s Propaganda Narrative: Get The “Vaccine”!
May 7th, 2021 Sons of Liberty Media

‘A MINEFIELD’: Billy Crystal Weighs In On Cancel Culture’s Corrosion Of Comedy
May 7th, 2021 Clash Daily

Cartoon of the Day: Crackpots
May 7th, 2021 Conservative Firing Line