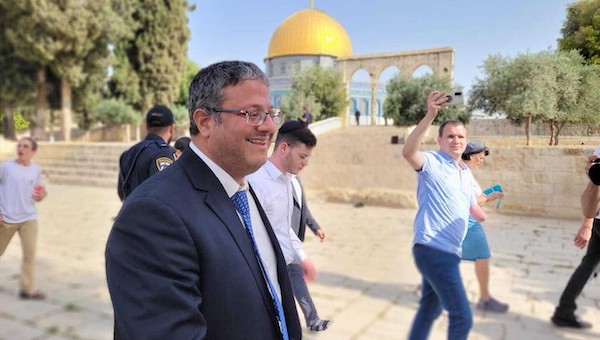 Israel’s National Security Minister, Itamar Ben Gvir’s visited the Temple Mount, Judaism’s holiest spot where the first and second Holy Temples stood. Many countries worldwide have quickly raced to a microphone to condemn the Jewish State for the horrible crime of a Jew walking across the faith’s holiest site. He did not pray, of course, as only Muslims can pray atop the Mount. Despite the international condemnation of a Jew walking through his faith’s holiest site, the real inciter of the condemnation was Moshe Dayan.

The Christian Gospels, which pre-date  Islam, believe the Mount was the location of the Temples to the “Big Guy upstairs” For example, in Mark 12:40 and Luke 20:47, Jesus accused the Temple authorities of thieving. He names poor widows as their victims, providing evidence of this. Mark 12:42 and Luke 21:2. Wrote that Dove sellers were selling doves sacrificed by the poor who could not afford grander sacrifice. According to Mark 11:16, Jesus put an embargo on people carrying any merchandise through the Temple gates—a sanction that would have disrupted all commerce. In the Gospel of John 2:15-16, Jesus refers to the Jerusalem Temple as “my Father’s house.” The Christian faith believes that Jesus is the Son of God, which means they consider the Temple Mount a Holy place. 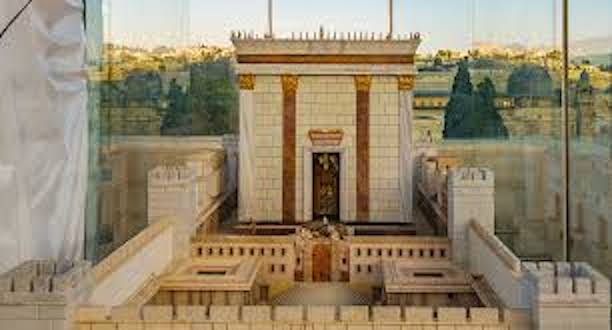 One Concept Of How The First Temple Looked

Even followers of Islam considered the Temple Mount to be the location of the Jewish Holy Temples. At least, that’s what they claimed before 1947, when the Jewish nation was allowed to have sovereignty over their eternal homeland. They doubled down in 1967 after the Six-Day war, when Israel removed the Jordanian occupation and took over Judaism’s holiest spot.

There are many examples in the Quran and other Muslim scripture saying the Jewish Temple stood on top of the temple mount. There is even a more modern example. The Official 1925 Supreme MoslemBen Gvir’sCouncil (Wakf) Guide Book To Al-Ḥaram Al-Sarif (Temple Mount) recognized the presence of the Jewish Temples atop the Mount. Below is paragraph two, which appears on page four, which says, “It’s [the Temple Mount] identity with the site of Solomon’s Temple is beyond dispute.” After Israel declared independence in i948, the Waqf removed all references to King Solomon’s Temple from its guidebooks, whose location at the site it had previously said was “beyond dispute 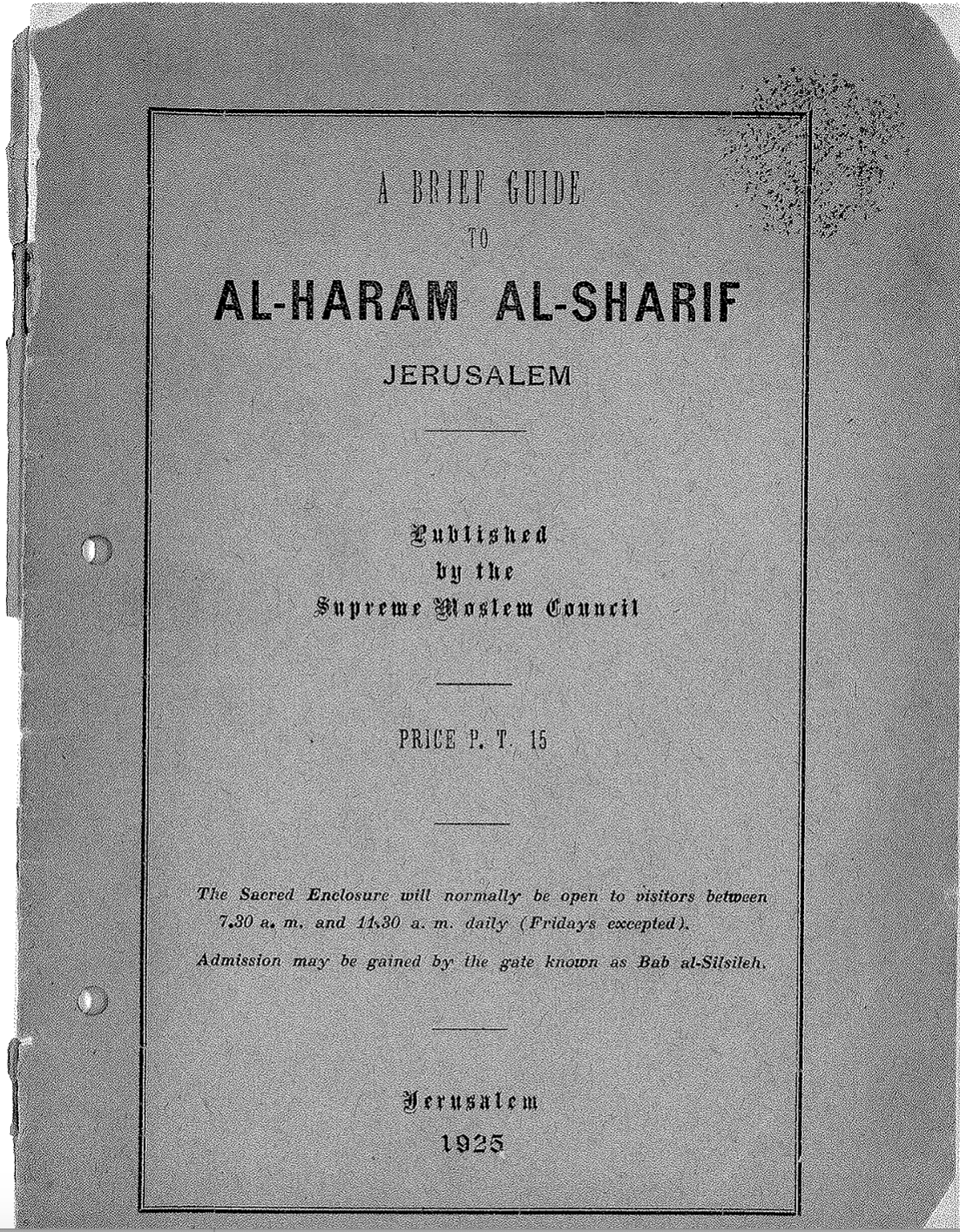 Even though the three Abrahamic faiths, the majority of faiths in almost every country in the western world, believe the Beit Hamikdash (the Jewish Temple) is atop the Mount. They are going against their own faiths to condemn the Jewish State of Israel and Itamar Ben Gvir’s stroll across the site of the Holy Temple. It wasn’t really his fault. It was the fault of the man who many believe is the hero of the Six-Day-War, Moshe Dayan.

Jerusalem became the capital city of the Jewish nation in the time of King David. David conquered it and made it the seat of his monarchy in approximately 1000 BCE. After the Romans conquered the city in 70 CE, the Jewish people mourned the loss of the city and the site of the Holy Temple in the city for the next nineteen hundred years.

After Israel’s War of Independence in 1948, the Jewish State controlled the newer half of the Holy City while Jordan occupied the older part of Jerusalem. But on the third day of the Six-Day War, Israeli forces reunified their capital.

Finally, after almost two millennia, the Jewish people controlled the Temple Mount. They could pray at the home of the holiest site of all of Judaism. Where the two Temples stood and where Abraham almost sacrificed his son Isaac.

Well—they held the top of the Temple mount until Moshe Dayan took it upon himself to cede control of the location of the holy Temples back to the Muslim Waqf under the supervision of Jordan, one of the countries that attacked Israel the week before.

Made Defense Minister just before the start of the June 1967 War, Israel’s quick victory made Dayan an international hero. But if it were not for the progressive hubris of the man considered to be the hero of the Six-Day War, the Temple Mount would not be as divisive of an issue between Israel and her neighbors as it is today. Jews were denied access to the Old City of Jerusalem since  Jordan gained control of the “Old City” during the 1948 War of Independence. 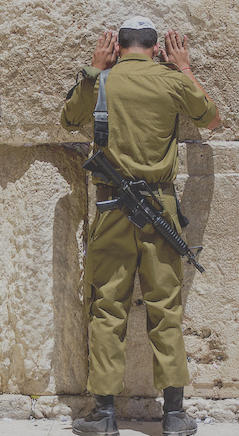 IDF Soldier Praying At The Kotel

It’s hard to explain the joy and reverence as Jews approached the Temple mount for the first time. It wasn’t a military celebration or only an Israeli celebration. The entire Jewish people were unified. Jews across the world cried tears of joy upon hearing the news. It should be noted that despite what commentators and the mainstream media will tell you, the Kotel (the Wailing Wall) is not the holiest site in Judaism—it is the retaining wall for the most sacred site in Judaism, the Temple Mount. The Kotel is the closest place to the holiest spot where Jews can pray.

According to accounts, Moshe Dayan did not believe Israel should try to unify Jerusalem. He was worried that entering the Old City would result in a house-to-house battle which might be costly and might cause damage to the holy sites of other faiths, and “that will bring the whole world crashing down upon our heads.” Future Prime Minister Menachem Begin convinced then-Prime Minister Levi Eshkol to overrule Dayan. The recapture of the old city was much easier than Dayan warned, and returning the Temple Mount to Israel created incredible joy, not just for Israelis but for the entire Jewish people, whether they lived in Israel or the diaspora. The whole Jewish nation was united in happiness.

When Israel gained possession of the Temple compound during the Six-Day War, Prime Minister Levi Eshkol wanted to create a multi-faith council to run the Temple Mount. The Muslim Mosque would not have been touched, but all faiths would be allowed up on top of the Mount, and it would “belong” to all three Abrahamic religions.

Dayan didn’t like that idea. He thought the Temple Mount should remain in Muslim possession. In his biography, Dayan stated that he was worried that Jews would try to rebuild the Beit Hamikdash (the Jewish Temple), which was the last thing he wanted. 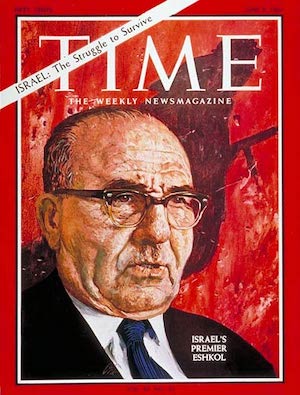 But Dayan thought he knew better than the Prime Minister, Rabbinical tradition, and the people of Israel.

Dayan took it upon himself to grant control of the Temple Mount back to the Muslims because he wanted to ensure there wouldn’t be a third Temple. And there was nothing that Prime Minister Eshkol could do about it. After all, this Moshe Dayan was a hero.

Historically King David purchased the site 30 centuries ago. As was written in Chapter 21 of the first book of Chronicles, “And David said to Ornan, “Give me the place of the threshing-floor, so that I may build thereon an altar to the Lord; give it to me for the full price.”

Since that day,  the Jewish people have lost possession of the Temple Mount three times. Only once was the site given away voluntarily. That was when Moshe Dayan gave it away 56 years ago.

Moshe Dayan is still considered a hero. But he should go down in history as the man who gave away the Temple Mount and gave the world opportunity to make the Temple Mount an issue. He turned the Temple mount into a place for riots, another way to delegitimize the Jewish State. Dayan prevented the entire Jewish nation from praying at their holiest site, which once hosted the Shechinah, the divine presence of God. The most sacred site in Judaism is off-limits. That is what Jews call a shanda (a shame).